May 2018Past IssuesSupply Chain and Logistics 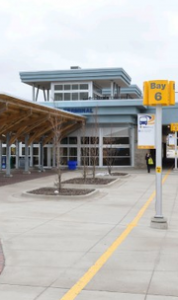 In the 2nd quarter of 2017, Halifax Transit’s conventional bus ridership was 3.99 million, its ferry ridership was 644,600, and Access-a-Bus ridership was 38,800. Operations are overseen from headquarters in Dartmouth, Nova Scotia. With a staff of 960, the company is a major employer for the region. After more than a decade working for Halifax Transit, including the last two years as Director, Dave Reage knows the public transit service inside out, and has keen insights into its future in the region.

Reage shares, “Metro Transit was formed in the early ‘80s through amalgamation of the transit systems of Halifax, Dartmouth, and the outlying county area, and we rebranded in 2014 as Halifax Transit. We’ve really been working to change the face of transit, focusing on the customer experience. The challenge any transit system has is getting people who own a car to leave their vehicle at home. We’re trying to identify the barriers that are keeping people from taking transit and how we can tackle those. Enhancing infrastructure is one solution – having climate-controlled transit terminals and bus transfer points to make the experience comfortable for riders. Positive results are also coming from the Halifax Transit Technology Program – a multi-year program that takes us from having very little tech to being one of the most technologically advanced systems in Canada, if not North America.”

The first big project for the new system was CAD/AVL (Computer Assisted Dispatch and Automatic Vehicle Location), which incorporates GPS on the buses, so they can be tracked in real time and generate data regarding on-time performance. That data is used to adjust the service for improved reliability. For the public, it means they can pull up an app and locate their bus on a map. If it’s running late, they can make decisions based on that. Fare management  and, ultimately, electronic fare payment is another tech solution on Reage’s wish list. “Transit is one of the few places where you still use cash,” he explains. “We want to make it more convenient; have an app where you tap your phone on the fare box to pay. That’s where we’re headed. We’re still a few years away, but we’re looking at bringing in new technology to revitalize the transit experience and make it more attractive.”

The public transit industry in Canada has been declining, despite record investment by federal, provincial, and local governments. Reage notes, “We’ve been flat for a while, but in the last few months, we’ve seen ridership pick up a bit. We’ve done a lot of changes this year, increasing and improving service, and we’ve seen positive impact from that. For the past three years, we’ve been working on the Moving Forward Together plan, which is redesigning our entire transit network, all the routes, etc. We’re into year three of a five-year implementation of that, and I hope what we’re seeing is a reverse of the trend of flat and declining ridership and we can start moving upwards.”

The Moving Forward Together plan was the most successful public consultation, in terms of number of people engaged, the Halifax Regional Municipality (HRM) has ever done. Rather than the traditional town hall meeting, Halifax Transit had members of a street team approach random citizens out walking, or at the grocery store, and give a 10-second outline of the plan, along with a card and website link where they could learn more and fill out a survey. “That type of innovative approach is the reason we had such a large response,” says Reage. “The last time we did a plan like this we got 2000 and our goal was to double that. This time it came back with 16,000 and blew our expectations out of the water.”  Halifax Transit is also investing in research to better understand public perceptions around Transit and how they can be used to help people choose Transit over driving their own vehicles to get where they are going.

Halifax Transit operates one of only two large-scale public 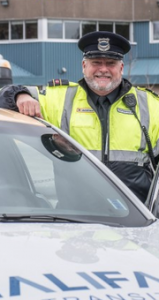 transit ferry operations in the country. The other is Sea Bus in Vancouver, BC. Reage says, “It’s a fairly rare form of public transit in Canada but, I can tell you, it’s the best way to get to work. It’s such a relaxing experience and an icon of Halifax. We recently launched a new ferry, the Vincent Coleman. So exciting! Since 2014, we’ve bought four new vessels and we have one more to come in August.”

These new ferries will ply the waters for 30 to 40 years, year-round, in the ice-free harbor. Halifax being a hilly city, prone to winter snowstorms, buses can have issues climbing the hills, but the ferries rarely get canceled. “We had Hurricane Juan in 2003,” Reage recalls, “and the ferries didn’t run during the storm but next morning, when the city was in shambles, the ferries were out there sailing across the harbor, a symbol of normalcy.”

Municipal taxes and fares pay for the bulk of transit funding. Additional financial support comes from the federal government through the Public Transit Infrastructure Fund, including 50 percent cost sharing on some capital projects. The Province of Nova Scotia also contributes, to the tune of $2 million per year. Emission requirements for all Halifax Transit diesel engines are based on U.S. EPA standards. Reage says, “Any time we replace an old bus with a new one, we gain some efficiency, as well as a reduction in particulate and greenhouse gas emissions. But the path we’re starting on now is around battery-powered electric buses; no tailpipe emissions. That’s the way of the future. It’s already happening in small droves across the country. We just received council approval to enter into partnerships for electric buses. The vehicles should be here next year, and we’ll do some pilots to get a sense of how they run in the network.”

Halifax Transit is partnering with Nova Scotia Power for energy storage solutions. In the model they’re contemplating, charging stations are located at the terminals. A bus would go out on an hour-long round trip, come back to the terminal for a 10-minute top-up charge, then go out for another trip. Reage explains, “The challenge to that model is that Nova Scotia Power would prefer to sell us energy overnight, which is cheaper through time-of-day billing. We’re looking at how we can charge these stations up overnight, to take advantage of lower electricity costs, and then release it during the day. Another fuel solution is compressed natural gas, and we’ll be doing a study comparing the two. Ultimately, I suspect we’ll have a mixed fleet of electric and diesel, with some natural gas, instead of a purely diesel fleet.”

Buses are acquired through a purchase process. Nova Bus out of Montreal and New Flyer in Winnipeg are the two major players in Canada that manufacture diesel buses. They are both in the electric bus market as well, while a few other companies manufacture electric buses only. Currently, the Halifax fleet is a mix of Novas and New Flyers.

Looking ahead, Reage says, “We have a couple exciting projects coming up. One is a commuter rail that’s in the study phase. If we get council approval to proceed, we could see the service operating in Halifax within the next five years, which would make us one of the smaller cities in North America to operate a commuter rail system. The other big one is Bus Rapid Transit (BRT). We should have a good plan for that in the next few months. We have a real opportunity to be one of the rare systems with three modes – bus, ferry, and rail. It really speaks to the diverse geography of Halifax.”

Another key focus is transit priority. Halifax streets are very narrow, especially in the historic downtown, so they don’t have the luxury of transit-only lanes. That means being more creative in terms of small and large investments at strategic pinch points to help buses move through traffic more efficiently. According to Reage, “We can put the best service or the best routes out there, but if they’re stuck in traffic, we’re not getting the return on the public money that we need. The other elephant in the room is autonomous vehicles. It can be a huge opportunity or risk.

“Consider having large buses as autonomous vehicles… when we train new drivers, we tell them, “driving a bus is only 25 percent of your job, the other 75 percent is safety of the passengers, and customer service.” So, how would that play out in a fleet without drivers? I think overall public acceptance of any autonomous vehicle will be a challenge until it becomes commonplace. But particularly if you get on a bus with 30 strangers – are you okay with there not being someone on there working for transit?”

WHAT: A public transport service operating buses and ferries 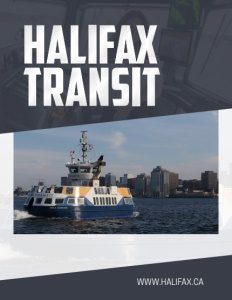