The ISM Raceway first opened in 1964, at the foot of the Estrella Mountains in Avondale, Arizona, some 20 miles southwest of Phoenix, and was known as the Phoenix Raceway. In its early days, the venue hosted only INDYCAR events, but in the 1980s, a NASCAR race was added each fall, and then in the early 2000s, a spring NASCAR event was also added to the schedule. The raceway was originally constructed with a 2.5 mile road course that ran on both the inside and the outside of the main tri-oval, but in 1991, the track was reconfigured to its current, 1.5 mile, interior layout.

In 1997, the Phoenix Raceway was acquired by the International Speedway Corporation, which began making some upgrades to the venue, now called the Phoenix International Raceway. “In the late ‘90s, we built a new grandstand; in the early 2000s, we built a tunnel and some other facility improvements, which were significant,” recounts ISM Raceway President, Bryan R. Sperber. “That said, the work that was required for this particular venue was still substantial – we had fallen behind the times in terms of what that venue needed to be able to host events and to meet the needs of the media, sponsors, and, most importantly, the needs of our fans. So, we started studying what would be the best way to address those shortcomings. And that put us on a path to take a step back and, basically, rebuild the entire facility, which is what we’ve embarked on, today.”

The rebuilding of the Phoenix Raceway is a $178 million renovation project that began in February 2017, and is slated for completion this coming fall. “We’re really touching everything in the venue, except the race surface, itself, which we repaved about 11 years ago,” Sperber reports. “Everything else at the venue is either being taken down to the studs and being completely rebuilt, or it’s being bulldozed and replaced with new structures. For example, the grandstands that exist on the front stretch will come down and be replaced with a real leading-edge grandstand structure with individual seats, cup holders, vertical transportation – elevators, escalators – shade, and great food and beverage. It’s a dramatic upgrade.”

“Our infield is being bulldozed and a brand new garage area and media center, medical center, offices, are all being installed to go along with an interactive infield experience for our fans,” Sperber continues. “We put in a new pedestrian tunnel that will connect the new grandstand to this infield structure, so guests will have an opportunity to go into the NASCAR garage, into Victory Lane, and be part of the pre-race drivers’ meeting, which is usually off limits. And, very conveniently, they’ll be able to exit the garage and infield area through this pedestrian tunnel and arrive right back at their seats on the outside of the racetrack. So, everything is interconnected with a mind toward upgrading the experience for fans, for the industry, for our sponsors, and for our corporate partners. Right now, we’ve got a few of the assets, online – we have a brand new club, called Curve, and some of the new suites are active and they received rave reviews from the fans. That gave us confidence that we were definitely on the right track.”

When complete, the new facility will have a grandstand capable of seating 45,000; 32 suites will be upgraded, and 19 new ones, added. A hillside terrace will be able to accommodate 10 to 15 thousand fans, with another 10 thousand in the infield area. There will be multiple new restrooms, with accessibility for disabled patrons, new souvenir areas, and new guest services and ticketing buildings.

Sperber says that races will continue through the spring even though some areas of the venue will be under construction.  “It won’t be perfect and there’ll be some ‘Pardon our Dust’ signs, and there’ll be some areas that will not be active, but fans on property will be able to see that we’re doing a lot of work,” he states. “And when our spring schedule is complete, then we go back to full-on construction mode and we’ll wrap up the entire project for a grand opening in November.”

“One of the reasons that we wanted to move forward with 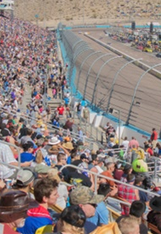 this project was because of the lack of variety and quality of our venue,” Sperber adds. “We were limited in terms of what we could host. We’ve been approached over the years by a number of different parties about a wide assortment of exciting events, but we just didn’t have the facility to be able to host them. Those days are gone. As of November, 2018, we will be able to host a myriad of different types of events, and people will really start to think about the Raceway in very different terms. We’ll be able to host multi-day music festivals; we have a conference center where we’ll be able to host meetings, dinners, parties – I’ve got several proms already booked. We’ve got a venue, now, that will able to accommodate just about any event you can think of.”

In September 2017, PIR formed a partnership with Ingenuity Sun Media (ISM Connect), which will pay an annual fee to rename the track ISM Raceway starting in 2018. “What ISM is able to bring to the table is a wide range of leading-edge technologies,” says Sperber. ISM’s Connect network will provide digital display screens, flat screen TVs and free Wi-Fi throughout common areas, interactive fan experiences, a mobile app, and social-media integrations throughout the facility, including in the new pedestrian tunnel connecting the infield and grandstands.

“The objective is to create a robust digital environment full of all sorts of digital experiences, many of which will be unique to the property,” Sperber declares. “The way I look at it is from a construction standpoint – we’re building an incredible brick and mortar environment that will now be able to complement a very rich digital environment to ultimately deliver this 360 degree experience in motor racing that has never been experienced before. I think it’s going to be truly remarkable. They want to create a showplace for technology and we’re going to be a little bit of a laboratory. It’s sort of Disneyland meets NASCAR – it’s full of attractions. And we couldn’t be more excited about that.”

Another corporate partner of the new ISM Raceway is DC Solar, a company that designs, manufactures, and leases portable light structures that operate on solar energy. “We have about a thousand acres and many of our events are in the evening or they finish during the evening and, a lot of times, because some of our events are multi-day and get started early, we have guests arriving sometimes in the morning before daybreak,” Sperber explains. “So, being able to disperse light throughout the entire property is really an important element of what we do.”

“The ISM Raceway will redefine the motorsports entertainment experience,” Sperber says in summation. “We’re really building something that’s unique and leading-edge. It’s like nothing else in the industry. I think fans are going to be blown away when they see what we’re creating.”

Check out this handpicked feature on K-Co Enterprises, Inc. – Foundations to Build on.

WHO: The ISM Raceway

WHAT: A motorsport track

Delta Diversified Enterprises, Inc. – Delta Diversified Enterprises, Inc. provides commercial/industrial electrical contracting and routine maintenance services to local businesses and general contractors in the Western United States. Its clients include the industrial, commercial, healthcare, institutional, retail, hotel/resort, and solar energy sectors. The company was founded in 1971 and is based in Tempe, Arizona with additional offices in Prescott, Flagstaff, and Yuma. – www.deltadiv.com 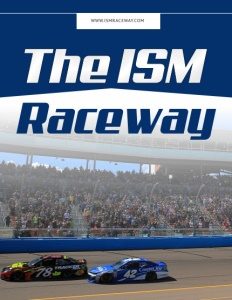