Business View Magazine profiles Goodyear, Arizona , a city of approximately 78,000 in a suburb of Phoenix in Maricopa County, Arizona.

Although Goodyear, Arizona thinks of itself as a young city, its roots actually go back a hundred years. Goodyear was established in 1917, with the purchase of 16,000 acres of land by the Goodyear Tire and Rubber Company to cultivate cotton for vehicle tire treads. During World War II, the Navy built the Litchfield Naval Air Facility and Goodyear became a town in 1946. In 1968, following the closure of the base, the city of Phoenix purchased the airport as a general aviation reliever airport for the Phoenix Sky Harbor International Airport. The town became a city in 1985, and the airport was renamed the Phoenix-Goodyear Airport in 1986.

Throughout the 1990s, 2000s, and 2010s, new homes and businesses continued to develop in this Maricopa County suburb just west of Phoenix, and today, Goodyear is the 6th fastest growing city in the nation with a current population of around 77,800. In 2008, Goodyear became an All America City, a designation awarded by the National Civic League annually to ten communities in the United States whose citizens work together to identify and tackle community-wide challenges. Goodyear was recently ranked the 7th most livable city in the country, by 24/7 Wall St.

Mayor Georgia Lord is effusive in her praise of the city and its happily ensconced citizenry. Every year, Goodyear publishes the results of its Citizen Satisfaction Survey, and “this year 93 percent of our residents rated Goodyear as an excellent-good place to live and 4 in 5 residents would recommend and remain in Goodyear,” she says. “People are very committed to Goodyear.” And why shouldn’t they be? The city is nestled between the Estrella and the White Tank Mountains, and offers its residents scenic mountain views, desert vistas, wide open spaces, more golf courses per capita than anywhere else in the country, lakes, parks, and palm-lined streets, and yet it is only a 20 minute drive to downtown Phoenix. It boasts a highly educated workforce and a median household income that is roughly $20,000 higher than the rest of Arizona. And its crime rate is less than half that of the state as a whole.

Goodyear is also a city that is geared for growth, with the right economic conditions for business to prosper. In addition to its skilled workforce, Goodyear sits between the I-10 and 303 freeways, with excellent access to both rail and air service. According to Michelle Lawrie, the city’s Economic Development Director, Goodyear currently has nearly two million square feet of projects under construction and actively encourages manufacturing companies to locate there. One of the major manufacturers already situated in Goodyear, is Sub-Zero, a manufacturer of refrigerators and refrigeration products. “They are headquartered in Fitchburg, Wisconsin,” says Lawrie, “but a significant amount of their production happens in Goodyear. They’re expanding their facilities here and will become one of the largest manufacturers in the West Valley, which is part of Greater Phoenix.”

In its efforts to attract new businesses, Lawrie says that the city works with several local organizations such as the Greater Phoenix Economic Council, which helps market its constituent communities. “We’re very regional in what we do,” she explains. “All of the mayors and the economic development directors get together to plan strategy for the region. We know that we’re stronger together when we’re making policy decisions, and when we’re growing our communities. One of our biggest goals is to attract major employers to increase our residents’ opportunities for employment.”

Goodyear’s two largest employers are in the health care industry. Abrazo West Campus, which has the area’s only Level One Trauma Center, and Cancer Treatment Centers of America, will be the anchors of Goodyear’s future Wellness Park. The Wellness Park will be developed on the 130 acres just north of Interstate 10 in the area that is the gateway to Goodyear. Lord says that the Wellness Park could eventually have facilities, such as a health garden that could be used for teaching better methods of enhancing healthcare to both citizens and tourists alike.

Another proposed project for the city, according to Lawrie, concerns a facility near the Phoenix-Goodyear Airport. “We have a very deep history in aerospace and aviation,” she says. “Goodyear has a wonderful historic campus near the airport which has more than 400,000 square feet of available office and industrial space. Lockheed Martin remains a tenant of the facility, although the company experienced layoffs at this location due to national reductions in defense spending. This facility is an asset and a great opportunity for new industry. We are seeing several smaller, innovative companies move into the space.”

The Phoenix-Goodyear Airport, itself, is owned by the City of Phoenix, although it is located within the City of Goodyear. “That facility was the training base for the Navy Blue Angels Aerial Demonstration Teams until 1968,” says Lawrie. “Today, the Airport is used for three major functions: it’s a pilot training facility, so we have companies like Lufthansa and KLM training pilots there. It’s also a corporate aviation hub and a reliever airport for Phoenix Sky Harbor when there are major events going on in the greater Phoenix area. The third piece is a maintenance, repair, and overhaul operation. We have one of the largest ones here in Arizona that is operating called Aero Turbine.” A new economic development at the Airport is a Corporate Hangar and FBO (Fixed-Base Operator) facility with three new hangars and 18,000 square feet of office space, being built by Lux Air Jet Centers. The $9.7 million project opened this past spring.

Since Goodyear is located in the Sonoran Desert of Arizona, and receives only ten inches of rainfall, annually, one of the challenges facing the city in its efforts to keep growing is making sure that its businesses and residents continue to have an adequate supply of water. “We have a water planning committee and our citizens are at the forefront of understanding this issue,” Lord mentions. “We have a big conservation effort. We were the only Arizona city in 2015 to win a top-ten award from the Water and Waste Digest. It recognized Goodyear for strengthening its water and waste operations and efficiencies.”

Lawrie says that its corporate citizens also are dedicated to conserving this most precious natural resource. “Cornell Cookson is a company by the airport – a specialty door manufacturer,” she says. “And they have a system at their facility to collect and retain rainwater.” REI – Recreational Equipment Incorporated – is opening an internet fulfillment and distribution center in Goodyear, and according to Lawrie, the company’s building was built with “an absolute dedication to our environment. Everything was put in with the thought of how to respect the environment.”
The city of Goodyear continues to grow and prosper, and Lawrie and Lord both agree that the main thing they want their city to be known for is its quality of life. “We have it all in Goodyear,” Lawrie says, emphatically. “It’s also a place where employers want to come and we’ve heard time and time again from companies, when they see the quality of our business parks and they see that we are a great economic environment, that’s where they want to be. We are that place where you can live, work, and play.”

WHERE: : A suburb of Phoenix in Maricopa County, Arizona

PV303 – PV303 is a master-planned business park designed to meet the growing demand for commercial and industrial opportunities in the greater Phoenix area. Located at the confluence of Interstate 10 and Loop 303 in Goodyear, Arizona, PV303 offers a total of ±1,600 acres with ±20 million square feet of office, retail, and industrial space. PV303 is ideally situated to serve Arizona and key markets in the western United States such as the Ports of Long Beach, Los Angeles and San Diego, California; El Paso, Texas and Las Vegas, Nevada. – www.pv303.com 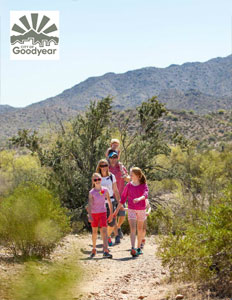