Wedged between the nearby suburbs of Montclair and Bloomfield in Essex County, New Jersey, and bordering the city of East Orange to it south, the Borough of Glen Ridge is a 1.5-square-mile slice of territory, about three miles long and no more than six blocks wide. Named after the glen next to the ridge formed by Toney’s Brook, Glen Ridge traces its beginning to 1666, when 64 Connecticut families, led by Robert Treat, bought land from the Lenni Lenape Native Americans and named it New Ark to reflect a covenant to worship freely without persecution.

At the time, the area included the future towns of Bloomfield, Montclair, Belleville, and Nutley. When Bloomfield was established in 1812, Glen Ridge was a section “on the hill” composed mostly of farms and woodlands with the exception of a thriving industrial area along Toney’s Brook in the glen. For most of the nineteenth century, three water-powered mills produced lumber, calico, pasteboard boxes, and brass fittings. A copper mine and a sandstone quarry were nearby.

With the arrival of the Newark and Bloomfield Railroad in 1856 and the construction of the Glen Ridge station and the New York and Greenwood Lake Railway station at today’s Benson Street in 1872, Glen Ridge began its transition to a suburban, residential community, 20 miles from Manhattan. Stately homes slowly replaced orchards and wooded fields. Over time, residents “on the hill” became unhappy with their representation on the Bloomfield Council; in spite of repeated requests to Bloomfield officials, roads remained unpaved, water and sewer systems were nonexistent, and schools were miles away. Area residents marked out the boundaries of a small area, and in 1895, Glen Ridge seceded from the adjoining town. 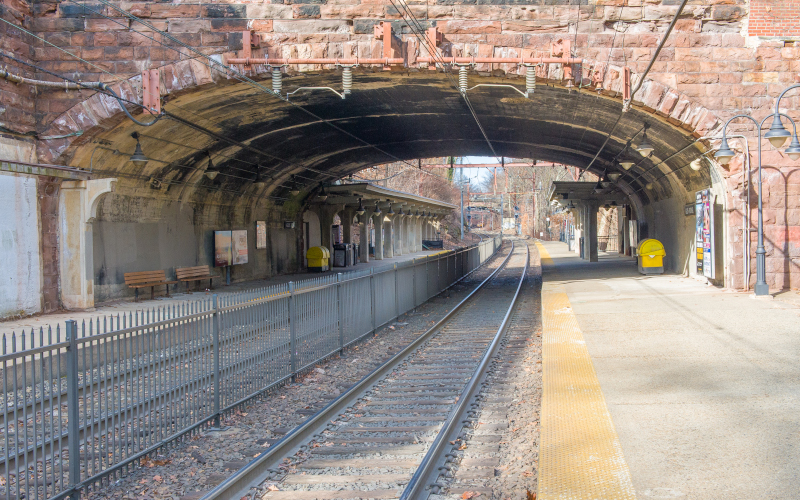 Today, the Borough of Glen Ridge is, according to Mayor Stuart K. Patrick, a “very attractive and restful type community,” home to approximately 7,600 residents. About 90 percent of the town is located in an historic district, with a preservation commission established in 1987 to conserve and protect its housing stock of vintage Victorian, Georgian, and Edwardian structures. “We still have slate walks, huge sycamores, and a gazebo down in the glen,” says Patrick. In addition, out of approximately 3,000 gas street lamps still in existence in the United States, Glen Ridge is home to 667.

In 1891, a three-story cottage belonging to Eliza Sheridan was purchased by Margaret Jane Merewether Power and friends to begin her mission of “caring for, curing, and nurturing the sick and injured.” Over the years, the Mountainside Hospital, as it became known, turned into the town’s main employer for generations. In 2007, on the verge of its shutting down, a private company purchased it and, according to Borough Administrator, Michael Rohal, “turned it around.” Renamed the Hackensack Meridian Health Mountainside Medical Center, it has become Glen Ridge’s largest taxpayer, while continuing its role of serving the healthcare needs of the Borough and surrounding communities.

Recently, the hospital grounds have become the site a major redevelopment project, plans of which include a 45,000-sq.-ft. medical office building and the razing of an obsolete school of nursing. “One of the surveys that the hospital performed showed there was a lack of family practitioners and internists in the area,” Rohal explains. “The hospital will employ approximately 20 internists/family practitioners to work in the facility.” Construction has begun with a project completion date of this coming November.

A second ongoing development project on the town’s agenda is a new apartment complex now under construction by JMF Properties. Located on Baldwin Avenue, just a short walk from downtown Montclair and steps from NJ TRANSIT’s Bay Street train station, Clarus Glen Ridge will deliver 110 modern rental residences and upscale amenities to the local market. The community is designed to offer an ultra-luxury lifestyle experience that incorporates the benefits of both urban and suburban living. 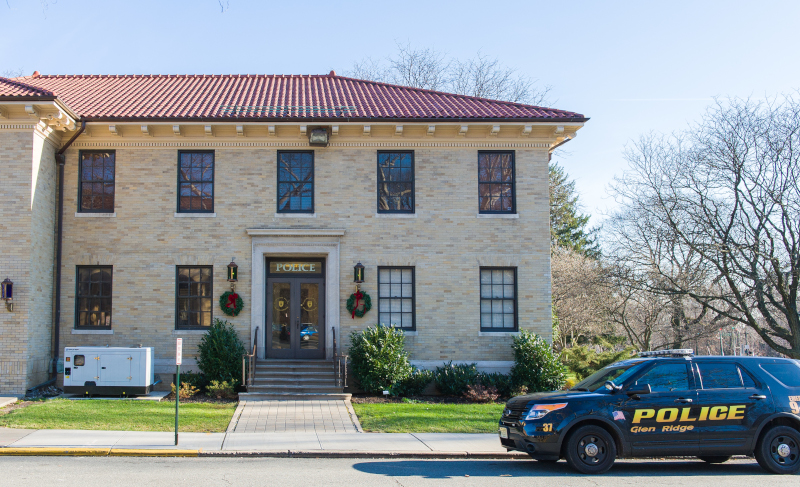 Residents of Clarus Glen Ridge will have access to a full-complement of amenities, including a state-of-the-art wellness center with fitness room and yoga/spin room with virtual fitness, lobby lounge, social lounge, billiards room, library, business center, package room, bike storage, second floor residents’ lounge, and a theater. Outside, a landscaped courtyard will include multiple seating areas, a game area, al fresco dining areas, grills, and a fire pit. Clarus Glen Ridge will be a pet-friendly community, and dog owners will appreciate the on-site bark park. Plenty of covered, secure garage parking will be available thanks to the 220-space garage that is already completed.

“Yet another upcoming project concerns the town’s educational system,” Rohal continues. “Years ago, when the school population was dropping, Glen Ridge sold its Central School to Wells Fargo Bank. The Board of Education reacquired the building through eminent domain, and we are now converting it back into an elementary school; it’s going to be pre-K to second grade. We anticipate the renovations to be completed by August. We’re going to phase in the grades; the first grade that’s going in is the pre-K, so it will be four years before it’s totally occupied.”

In an effort to lower its residents’ energy costs, Glen Ridge is currently working together with four neighboring communities – Maplewood, Montclair, South Orange, and Verona – in an energy aggregation program with its electricity provider, PSE&G – the Public Service Electric and Gas Company. PSE&G is the state’s largest provider of gas and electric service, servicing 1.8 million gas customers and 2.2 million electric customers in more than 300 urban, suburban, and rural communities, including New Jersey’s six largest cities.

Rohal explains, “We put that out for bid in April, and we received a bid which would reduce the supply costs for our residents by ten percent, and also double the amount of renewable energy from 20 percent to 41 percent. The program starts July 1st, and it’s a 17-month contract, with an average savings of $150 per resident over the 17 months.” Other planned infrastructure projects in Glen Ridge include the replacement of the borough’s 700 lead-lined water services and the relining of approximately 12,000 feet of sanitary sewer lines.

Recently, one of Glen Ridge’s most treasured institutions, the Borough’s library, first built in 1918, was rated the top library in the state by New Jersey Family Magazine. “I was on the Library Board for about eight years,” says Mayor Patrick, “and I think that it’s one of the most well-organized organizations I’ve ever been associated with. The Board is very forward-thinking; they are very supportive of new ideas that will ultimately make it the most important cultural and educational center in the town. Jennifer Breuer is a good leader and her staff have bought into her whole program. This is an old and historic facility that they’re in, but it’s very well-maintained, and they bring on every new piece of technology that will advance them. So, it’s a tremendously far-reaching operation as far as having programs for kids and adults. We’re very proud of that department in the town.”

Pride and progress – it’s no wonder that Niche.com, a company that ranks best places to live, recently awarded Glen Ridge Borough an A+ grade, and ranked it #4 out of 411 suburbs in New Jersey in which to raise a family, while USA Today ranked Glen Ridge as the 3rd wealthiest town in the state.

Intelligently-designed, highly-detailed, transit-oriented development continues to spread throughout New Jersey as government officials and local stakeholders recognize the lasting positive impact this type of development has on municipalities. Developer JMF Properties is at the forefront of this movement, creating properties that embrace the unique character of each community. JMF’s focus on this type of development is evident in thriving communities such as Estling Village in Denville and Clarus Maplewood, the first WELL Certified™ residential community in New Jersey.

Under the leadership of Joseph M. Forgione, with more than 25 years of experience in the industry, JMF Properties has earned a reputation for creating residential, retail and mixed-use communities of lasting value in some of the state’s most desirable locations. Mr. Forgione has developed more than 2,500 residential units that are under JMF’s management, as well as multiple commercial and retail properties during his career. Additionally, more than a dozen projects are currently in various stages of approval or construction, totaling 1,200 residential units and more than 1,000,000 square feet of retail anchored by top retailers such as Whole Foods, Starbucks, Homesense, Shake Shack, LA Fitness and Lowe’s Home Improvement.

Now JMF Properties is proud to introduce the newest residential community that will carry the “Clarus” brand name, Clarus Glen Ridge. Taking its cue from the property’s Latin name, which means “clear” or “bright”, Clarus Glen Ridge will offer a balanced lifestyle with light-filled residences, exquisite finishes and appointments, and a curated collection of amenities in the historic Borough of Glen Ridge, just a short walk from downtown Montclair and the Bay Street train station. Construction is underway, with an estimated spring, 2020 grand opening planned. To learn more, visit www.jmfproperties.com.