Town of Lincoln, Ontario – A hotbed of heritage and agricultural innovation

A hotbed of heritage and agricultural innovation

Business View Magazine interviews Sandra Easton, Mayor of the Town of Lincoln, Ontario, for our focus on Growth & Economic Development in Canadian Cities

Nestled between Lake Ontario’s southern shore and the Niagara Escarpment, the Town of Lincoln, Ontario has one of the most diverse economies in the Niagara Region, serving the communities of Beamsville, Vineland, Jordan, Jordan Station, Campden, Tintern, and Rockway. Steeped in history and with a strong agricultural base, Lincoln also has many nature sites that have earned it recognition as a top tourism destination in Southern Ontario. Sites such as Ball’s Falls and the Bruce Trail make it a perfect eco-tourism location, supported by Lincoln’s many craft beverage manufacturers. From wineries, to breweries and distilleries, Lincoln’s craft beverage scene is unparalleled throughout Ontario. In essence, the Town of Lincoln is truly a fully-realized town with a rich story to tell.

Today, Lincoln is a leading area for tender fruit production and grape growing, and houses the largest concentration of greenhouse operators in Canada, growing a wide variety of flowers for sale throughout Ontario, Quebec, and the U.S. Lincoln also has a strong advanced manufacturing industrial park that is home to many large multinational businesses, such as Ophardt Hygiene Technologies, Dorken Systems Inc., Champion Moyer Diebel Systems, and Cla-Val Canada, to name a few. The Town’s manufacturers produce some of the world’s best sanitization products, pistons, hydraulics, automatic control values, and advanced agricultural farm equipment. Lincoln’s manufacturing products are hot commodities for both domestic and international use.

The flower industry in Ontario accounts for $800 million in sales (half of which gets shipped to the U.S.) and Niagara producers account for approximately 50 percent of province-wide production. Of those Niagara growers, the Town of Lincoln happens to be the biggest floriculture supplier. Some fruits and vegetables are being grown under glass as well. “During the pandemic, we had a couple of companies that were so innovative,” says Easton. “One of those was Clean Works, whose co-founder Paul Moyer was already using proprietary technology to sanitize fruits and vegetables against problems like E. coli. They completely reimagined that technology to create the Clean Flow Healthcare Mini – an Ontario-made device that decontaminates up to 800 N-95 masks per hour, along with other personal protective equipment.” The Town was very proactive in helping Clean Works get their paperwork through to Health Canada to acquire the $2 million in resource dollars that were allocated to manufacture the device.

The Town of Lincoln is also progressively becoming a destination for food and drink tourism, in collaboration with other tourism destinations in Niagara, such as Niagara Falls. They’re working hard to educate the public about their homegrown attractions like Dillon’s Small Batch Distillers, Bench Brewing, and over 50 wineries they have in their own backyard.

“We host some wonderful events here,” says Di Ianni, referencing the annual Winter WineFest that takes over Jordan Village every January, and the always indulgent Niagara Icewine Festival. “In 2018, we developed our economic development strategy, identifying how we could grow our Greenbelt community and, in places where our urban boundaries are set, focusing on tourism and some of that value-added agriculture. Our tourism strategy, which was just approved and completed in June 2020, calls for the Town of Lincoln taking on a larger role in managing the overarching destination. We’re working with our destination marketing organization, the Twenty Valley Tourism Association, re-developing and re-envisioning what that organization looks like, to support and promote the Town of Lincoln in the tourism industry. We hired our first Tourism Coordinator in August, and she’s hit the ground running with some marketing strategies to help bring people – safely and responsibly, of course – into our community.” 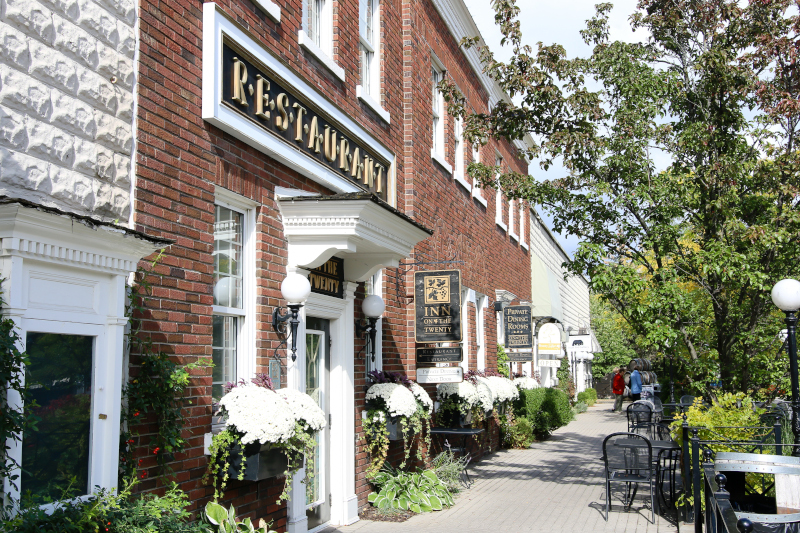 The Town has just formalized a partnership with the City of St. Catharines, largest city in the Niagara region and sixth largest urban area in the province, to orchestrate some joint marketing initiatives. “We think there’s an opportunity to market our rural experiences versus their urban ones,” says Di Ianni. “There’s a good trade-off between our two communities.”

GO Transit (a division of Metrolinx), the regional public transit system serving a population of more than seven million across the Greater Golden Horseshoe region of Ontario, is presently eyeing its own partnership with private developers and property owners for a GO train station that could come to Beamsville, as Metrolinx embarks on a GO expansion into Niagara. GO expansion into Niagara and the ability to usher Greater Toronto Area travelers into Lincoln would be a key component to supporting their tourism strategy and contribute to economic development by giving workers greater flexibility for commuting in and out of Lincoln.

“Lincoln is one of four locations identified in that plan, along with Grimsby, St. Catharines, and Niagara Falls,” says Mike Kirkopoulos, Chief Administrative Officer. “As a result of the change in government, the transit-oriented communities model really moved forward. Our private sector company, Court Holdings Ltd., owns 38 acres around our proposed GO station, and they’ve been in conversation with the region, the Town, and the provincial government about opportunities to bring a GO train station to our community.”

Because a large portion of Lincoln’s lands are included within the Greenbelt boundaries and therefore protected from urbanization by the Niagara Escarpment Commission, the Town has had to be more focused, careful, and deliberate with its decisions concerning residential development. “Intensification is really what we’re seeing more of,” says Kirkopoulos. “Land is at a premium everywhere, and Lincoln is no different.”

Prudhommes Landing, representing half a mile of Lake Ontario shoreline on 84 acres in Vineland, is Lincoln’s largest development and will be what Kirkopoulos portrays as “a very complete community. It’ll have an employment portion to it. It’ll have a commercial portion to it. But one of the key tenets that Council fought for was to protect as much of the natural environment there as possible. That includes natural preservation of some of the features, but also a waterfront park and a range of low- to high-rise accommodations. It’s a $1.2 billion development and probably one of the only remaining waterfront properties anywhere on Lake Ontario, from Toronto to the border here.”

“It will be a complete community, but we don’t want it to look like any other housing development,” affirms Easton. “We’ve taken quite a bit of care to ensure that the mixed housing offered there is, in itself, good quality, and that the look and feel of the community isn’t like those barracks you see when you look across the fields as you’re driving down the 400 series highways. Normally, Council wouldn’t get involved in the site plan process but, in this case, our noses are into it a little bit more because we want to make sure all the right things are done. It’s really an ideal place to put up some signature buildings, and that’s what we’re thinking about.”

The Mayor’s hope for Council is that they can continue to stand alone as a strong community, from every perspective that can be used. “It’s exciting, really, to live here now,” she stresses. “Investors should have confidence – and I believe they do – that long-term planning with them is an important part of the way things are done. We honor the people who come here to make Lincoln a great place to grow, prosper, and belong.”

Where: In the heart of the Niagara Region

Neptune is a technology company serving water utilities across North America. We make data actionable by providing effective measurement tools, networks, software, and services designed for the business of water. Neptune has a passion for serving water utilities. We will always deliver innovative solutions as your most valued partner