The Rabobank Arena, Theater and Convention Center – A lot to offer

A lot to offer

The Rabobank Arena, Theater and Convention Center, owned by the City of Bakersfield, and managed by  AEG (Anschutz Entertainment Group), a worldwide sporting and music entertainment presenter, is the area’s home for concerts, sports, family shows, community activities, and many other events throughout the year. The first building of the complex, the 3,000-seat, Civic Auditorium, was originally constructed in 1962 to house the communities’ musical groups, such as the Bakersfield Symphony, as well as serve as a venue for touring Broadway shows and other entertainment options.

In 1998, the facility was again modified – the parking lot, located east of the facility, was removed for the construction of a $36 million, 10,000-plus-seat sports arena and the combined complex was renamed the Centennial Garden and Convention Center. Incorporated in the design of the sports complex was a connection to the exhibit hall. This unique feature allowed the convention center to be used as a staging ground or warm-up facility for events being held in the arena. The entire complex was renamed seven years later, when the city signed a 10-year agreement with Rabobank, to name the complex the Rabobank Arena, Theater and Convention Center.

Today, the Rabobank Arena is home to the Bakersfield Condors, an ice hockey team in the American Hockey League, and occasional California State University, Bakersfield Roadrunners Men’s NCAA Division I basketball games. The Arena is also the current home of the California Interscholastic Federation High School State Wrestling Championship Tournament held the last weekend in February. It has also served as the home field of the Bakersfield Blitz arena football team and the home court of the Bakersfield Jam of the NBA-D League. As a concert venue, the building seats 5,400 for half-house shows and up to 10,225 for center stage and end-stage shows. The arena floor measures 17,000 square feet of total space.

Steve Eckerson, the combined facility’s General Manager, reports that AEG has a full-time staff of 20 at the facility, and approximately 200 part-time employees, and that the three venues host about 200 events per year. “Our events are wide-ranging,” he notes. “We do high school proms; we do corporate holiday parties; we do local women’s group’s events; we do job fairs; we’ll do a science fair; a comic book show; a wide variety.”

Eckerson explains that as a local venue, the Rabobank Arena, Theater and Convention Center does not have much competition from nearby facilities – Fresno is the closest big city and it’s over a hundred miles away. It also doesn’t compete with area hotels that may have large banquet rooms capable of attracting convention business. “The Marriott is actually connected and we work together to bring events to the complex,” he notes.

Eckerson reports that several major upgrade projects are in the planning stages. “We recently received city council approval to convert all our lighting to LED,” he begins. “That will be over a $700,000 dollars because it includes the theater stage lighting which is very inefficient and very hot. And you’re not going to be able to purchase some of those bulbs much longer. We think that the payback is going to be three years, so that’s significant.”

“The floor of the convention center – much of it is the original from back in the ‘60s – that’s going to be replaced,” he continues. “We’re not only dealing with cracks and gaps, which is a safety issue, it’s also very unattractive. The goal is to bring more events to the facility, so there’s a payback piece to this. The convention center also is where we park busses and trucks for concerts that are either in the theater or the arena. So, the floor has seen a lot of use. That’s a big project. We think that once we make this floor more presentable, we can attract more events.

“Also, we’re going to renovate all the meeting rooms – there are 12 and they have not been updated since the late ‘80s, early ‘90s. The rooms need carpets, ceiling tiles, wallpaper, and paint. And there will be some portable AV equipment that we don’t currently own and that has to be rented, so we will have some of our own gear, onsite, that we can offer to clients. Again, the idea is to attract more business to the facility.” 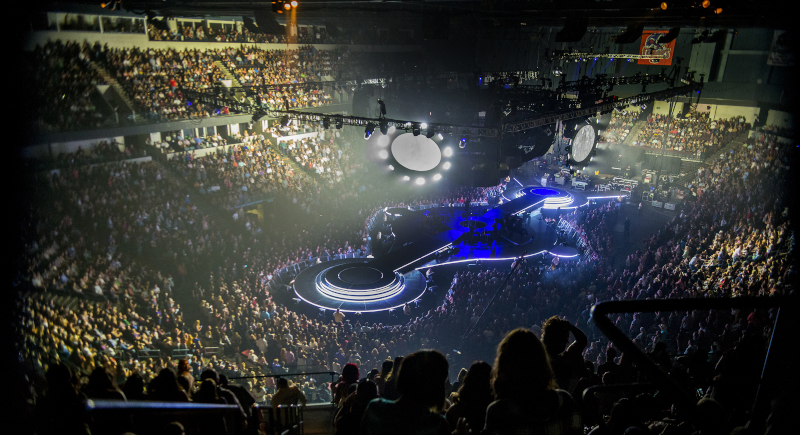 The price tag for the refurbished convention flooring is “in the $400,000 range,” says Eckerson. “The meeting room upgrade is $130-150,000. The city passed what’s called ‘Measure N.’ They went to the voters and asked for another half cent sales tax and it passed by 97 votes. The estimate is about $60 million in additional revenues. A lot of this money has been designated to hire 100 additional police officers; they’re going to address the homeless issue; there are monies for fire prevention and fire equipment. Then, there’s a piece that the city council approved from these Measure N funds – about $2.3 million – and that’s how these projects are going to get funded. As far as the arena, we’re asking for new dasher boards and glass for our hockey team, which is close to a half million dollars; a scoreboard upgrade; painting of the inside of the arena; painting a pedestrian bridge which crosses railroad tracks; there are 11 or 12 projects that we’re confident that the city council will approve.”

Regarding green practices at the Rabobank Arena, Theater and Convention Center, the complex is committed to reducing its environmental impact through ongoing efforts to save energy and water, recycle, and purchase environmentally preferable products. A few of the projects it has implemented to minimize its environmental impact include: a recycling program for glass, plastic, aluminum, cardboard, paper, and more; a composting program for food waste and paper towels; the installation of water-efficient toilets, urinals, and faucets throughout the facility; and a program to purchase recycled-content toilet paper and paper towels.

However, other than its planned program to replace its lighting fixtures with LEDs, Eckerson says, “There isn’t a big project that would give us gold certification. We continue to explore solar and also a demand limiter system,” he adds. “When it comes to solar, though, there’s no way to put solar panels on the roof to create a solar field. It’s not cost-effective, presently. But we are certainly conscious of our environment. AEG has a sustainability department with full-time staff, and I think we manage in an environmentally prudent way.”

Since the Arena opened 21 years ago, the complex has been the catalyst for further downtown development, tourism, and job creation – an Amtrak Train center, a movie theater complex, an ice rink (that is also managed by AEG), and an aquatic center have all opened, nearby. Going forward, Eckerson says that he would like to continue to attract more local and regional events, such as banquets, corporate meetings, and the like.

And he believes that the complex, as well as the City of Bakersfield, has many advantages. “The fact that there are three unique venues all in one footprint, including the Marriott Hotel, makes us very flexible, very multipurpose, very easy to get to, and to stay,” he asserts. “And I think Bakersfield is kind of underappreciated because it has a lot to offer. The community has a lot of pride in what they have.”

WHO: The Rabobank Arena, Theater and Convention Center

WHAT: A venue for concerts, shows, and events

Payroll Vault – A National Leader in...