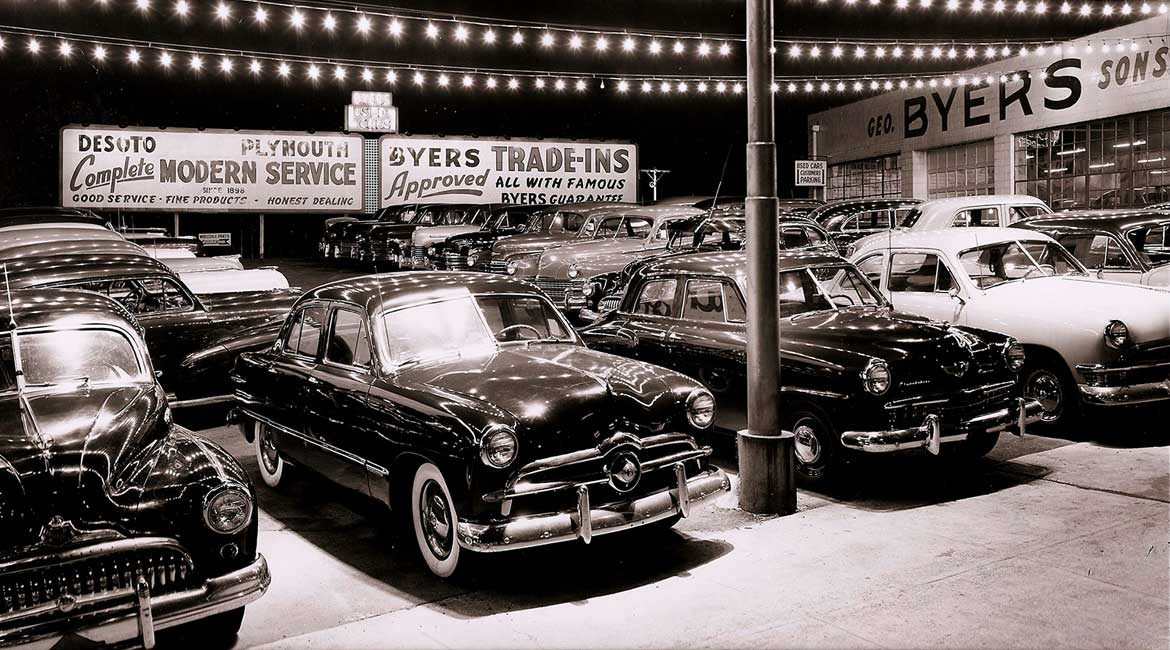 George Kauffman has always been around cars. He’s the fifth generation of a fabled Columbus, Ohio family that has been in the transportation business, in one form or another, for 120 years. “My great-great-grandfather, George W. Byers, founded Blue Ribbon Stables in 1897,” Kaufmann recounts. “He was a horse trader and he built buggies for Chillicothe and Columbus. He was a pretty renowned showman; he once staged the largest horse sale in central Ohio. He rented the entire Ohio State Fair grounds and he installed electric lights, at his own cost, back in 1899. He was a forward-thinking, aggressive salesperson.”

In 1929, the company founded by George W. changed its name to George Byers & Sons, and the two brothers, Frank Byers, Sr. and George Byers, Sr., like their dad, were also forward-thinking and aggressive. They knew that the automobile was here to stay and they began buying and selling cars. “The first models of cars that we sold were Hudson, DeSoto, Essex, and Plymouth,” Kauffman continues. “In 1934, we added a truck department and started our relationship with GMC. In 1954, we added our Hertz car and truck rental franchise, so we were in the retail and rental world. 1957 was when we started our import division with Subaru and Volvo. That store is still operating with Subaru, Volvo, Audi, Volkswagen, Porsche, and Jaguar. We once sold Triumphs there – and Sterlings, which were built by Honda and Land Rover.”

In 1977, the company purchased the remaining models and all the rights to the Briklin car brand. (The Bricklin was a gull-wing door, sports car manufactured in Canada from 1974 to 1975. It was the creation of Malcolm Bricklin, an American millionaire who had previously founded Subaru of America.) “In 1982, we became a Chevrolet dealer,” Kauffman says. “In 2003, we added Toyota; in 2007, we added Ford; and in 2008, we added Kia. We don’t sell Honda or BMW. This is our 120 anniversary and we’re still family-owned and operated. We’re at 15 brands; we’ve got eight locations; and we hover around 800 employees. My grandfather, who turned 88, still comes to work three days a week. It’s pretty neat to be able to rely on his wisdom, and information, and criticism.”

In fact, Kauffman has been following in his grandfather, Frank M. Byers, Jr.’s footsteps his entire life, and admits that he always wanted to be like him and do what he did. When he was little, he would play in his grandfather’s office, and when he was eight or nine, he started washing cars. When older, there were countless hours on the sales floor, learning all facets of the business. “Nobody’s been given anything,” he remarks. “You’re not just taken aside one day and told, ‘Here’s your store, or here’s what you’re going to do.’ You have to work for it; so when you do get to a position where you’ve got some authority, you not only appreciate it, you understand why the company has succeeded and why you want to contribute to its growth.”

The enduring growth that the Byers Automotive Group has experienced for over a century can largely be attributed to the company’s ethos as passed down, over time, from father to son – and grandson. “One of the things my grandfather always used to tell me was, ‘If you think you’re going to sell one person one car, you’re not going to be in business very long,’” Kauffman relates. “’You have to treat that person well enough that they want to come back to you for everything. You want to sell them, their kids, their parents, their friends.  And in order to have that opportunity, you need to sell that particular person in front of you, right, the first time.’ It’s something I’ve lived by ever since I was a little kid. I completely agree with that.”

But innovation has also been a hallmark of the company’s business model, and each generation has made its own contribution. Kauffman says that he came of age at the same time that new communication technologies were creating a paradigm shift – similar to the time when cars supplanted horses and buggies. “Right coming out of college, I was able to recognize that the internet was not going away, and the importance of having a website; that this was the true future of where retail was going,” he declares. “Your number one showroom is now on your computer screen and your smartphone.”

People doing research and shopping for their cars online has shattered the old way of selling, and Kauffman, for one, believes that the change is for the better. “It’s definitely revolutionized what we do,” he says, “and it’s allowed us to streamline the sales process.  The number one thing is the customer experience. But, no matter how happy customers were when they left here, when you asked them if they could change anything, they’d say, ‘Why did I have to wait in the showroom for so long? Why did I have to wait for the finance office for so long?’ Now, with the customers doing 99 percent of their homework on the internet, once they come into the store, they’re pretty much prequalified. And they know the reliability of a car, of that year, of that make and model, because they’ve done a ton of research. So, people are feeling a lot more confident in making a decision. That allows us to get them in and out in a much quicker and more efficient process. So, overall, it’s made the customers much happier; they’re not spending four, five, six hours here on a Saturday.”

Kauffman further acknowledges that up-to-the-minute communication technologies help the company stay in better touch with its customers. “Before, you had to call and leave a message and write letters,” he explains. “Nowadays, with texting and CRM tools, everything is very quick and you know the customer is getting your emails or your texts and is able to respond in a more timely fashion. They’re getting alerts on where their car is, or a repair status.”

At the same time, Kauffman understands that face-to-face customer service is still held in high regard at Byers, and employees are trained to make the most of personal interactions whenever and wherever they can. “Cars are much more reliable, these days, and as customers are spending less time in the showroom, your main point of contact is when they are coming in for service, and warranty repairs, and buying parts,” he says. “So, you’ve got to treat them right when they’re in your service department. It’s more important than ever.”

What is also important to the Byers family is its employees. “Some of our employees have been with us twenty, thirty, forty years,” Kauffman says, proudly. “And it’s generational – their children come and work for us. I was told at a young age – I was in the Chrysler showroom and my grandfather pointed out a salesperson and asked, ‘Do you know his name?’ And I said, ‘No, I don’t.’ And he said, ‘You should. He does a wonderful job and without him, without good people, you will never have anything.’ That stuck with me forever. The people who work for you are the most important asset you will ever have. If you don’t treat your employees well, I don’t think you’re going to treat your customers well. We have a lot of happy employees who enjoy working for us and I think that’s a good testament to how we run things.”

No doubt, both grand-father and great-great grandfather would agree that the present day Byers family is still running a tight ship. And Kauffman says that, some day, there might be a sixth generation ready to take the reins of the legacy business. “I’ve got a cousin whose son is in college,” he states. “He’s not fully committed, but I hope he decides to work for us. There are a couple of nephews in there, and a niece or two. And I hope one or two want to give it a shot. You have to like family. I walk into the corporate office and the first people I see is my mother and my grandfather; and my aunt’s right next to him. I have a son who’s about to turn eight. So, he’s a little ways off – but I’d like to think I have a shot.”

WHO: The Byers Automotive Group
WHAT: A family-owned new and used car dealership
WHERE: Columbus, Ohio
WEBSITE: www.byersauto.com

WASCO  – The mission of WASCO, or Wholesale Auto Supply Co., is to offer the highest quality products and services at the most competitive prices while functioning as a one-stop shop for auto dealers. The company was founded in 1959, when a group of individual business owners realized the necessity of pooling their purchasing power to acquire goods and services which would lower their operating costs. In 1967, it became apparent that the concept worked well and a warehouse facility was purchased. Currently, this 30,000 square-foot space is equipped with the latest technology in distribution functionality which allows optimal inventory management. – www.wascoonline.com 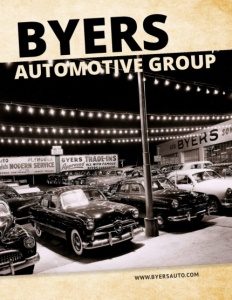