The Yardmen Arena – Popular in a hockey town

Business View Magazine interviews Peter Lyng, Director of Facilities at the Yardmen Arena, as part of our focus on Canadian sports venues. 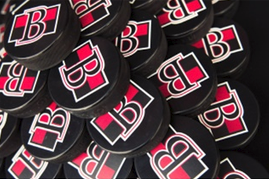 The Yardmen Arena, originally called the Quinte Sports Center, was named after a group of Canadian National Railway workers who spearheaded the drive to build a sports venue in the community, raising more than $3 million to contribute to its construction. “They came up with a strategy to run a lottery with small prizes for local people, but the funds all went back into building the Yardmen,” says Lyng. “They had some grand plans, including an outdoor pad, the main indoor pad, a curling rink, a swimming pool, ball diamonds, and a track and field facility. Unfortunately they couldn’t do anything more than just the main bowl and the outdoor rink, and they opened it up in 1978. After a year of operation, they couldn’t make a go of it, so they handed it over to the municipality to run it for them.”

In the 1990s, a second rink was added to the Yardmen, and in 2012, two more rinks and three swimming pools were added to the complex, now known as the Quinte Sports & Wellness Centre, a 335,000-sq.-ft. facility, with four NHL-sized ice pads, one of which is in the Yardmen; an aquatics center; a multi-use gymnasium space; an indoor track; fitness studios; community and cultural spaces; a pro shop; and retail and food services. “So, we actually achieved what the Yardmen wanted to do, originally,” says Lyng.

In 2015, the Belleville Bulls were acquired by a new owner who moved the team to Hamilton and renamed them the Hamilton Bulldogs. “When we lost our OHL team, the city was in mourning,” Lyng recounts. Luckily, for a hockey town like Belleville, suitors were soon lining up to take over the Yardmen Arena home ice, assuming the presence of an eager fan base. “Ten different teams came knocking at our door when they heard we were without a team,” he adds. The town finally settled on the Binghamton Senators of the American Hockey League, who said they would move from New York and sign an eight-year lease, provided the city would make substantial improvements to the Yardmen.

Belleville agreed to renovate the Arena at a cost of $20.5 million. The Yardmen grew its seating capacity from 3217 to 4400 and its ice rink was upgraded to NHL standards. Other improvements included an expanded and renovated home team dressing room, corporate and club suites, a new refrigeration system, upgraded concourses, a new score clock, and an enhanced sound system. On November 1, 2017, the newly-named Belleville Senators, a top minor league affiliate of the National Hockey League’s Ottawa Senators, began their debut season.

“We’ve tried to get our customer experience 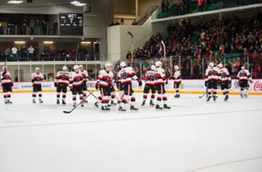 well above what it used to be,” Lyng asserts. “We’ve changed seating angles, we’ve changed washroom accessibility, we’ve changed the elevator function – all three levels of our building are fully accessible to wheelchairs, now. We’re able to control our temperature better. We gutted all the old lighting systems in the building; it’s completely LED, now.

“We have a solar farm on the roof – 2,800 solar panels and 490 megawatts. We generate approximately $1,000 a day of electricity that we feed back into our local grid, as well as into the building to help reduce operating costs. We went back to thermal storage, which is like the old iceboxes that our grandparents used to have in the 1930s and ‘40s. We freeze large vats of water overnight when electricity is cheaper in Ontario. In the daytime, I use that cold material to chill the air in the building. In the first year of operation, I reduced my energy consumption by $60,000.

“The last project we did was an eco-chill plant that is 98 percent efficient. So for every dollar I spend to make ice to skate on, I get 98 cents back worth of heat into the building. And, we are in the process of installing co-gens in the building, which will reclaim waste heat from the heating and hot water systems. So, I have two boilers that only run once a year – on New Year’s Day. And the AHL referees say this is the best ice they’ve skated on.”

In addition to the Senators and other area hockey teams, the Arena is also home to The Quinte Sports Hall of Fame, and hosts many concerts, circuses, religious events, and other events such as Monster Trucks and The Price is Right Live stage show. “We’re open to any type of show that wants to make a stop in Bellville,” says Lyng. As for the rest of the Quinte Sports & Wellness Centre, it’s a perpetually busy place with an average of 1,500 visitors per day. “When you do the math over the year, and you look at our population, which is just 50,000, it shows how popular we are,” he declares.

WHO: The Yardmen Arena
WHAT: A hockey arena in the Quinte Sports & Wellness Centre
WHERE: Belleville, Ontario
WEBSITE: www.quintesportsandwellnesscentre.ca 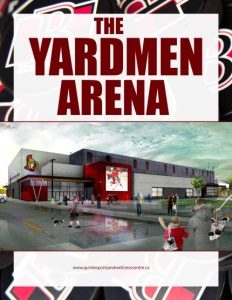