Pinmar USA – Having the best of the best

Pinmar USA is the U.S. division of the largest yacht refinishing company in the world, currently known as the Global Yachting Group (GYG), based in Palma Mallorca, Spain. “The Pinmar brand has been in existence for 40 years and is recognized as the biggest name in superyacht finishing,” says Phil Burgess, General Manager, of Pinmar USA, based in Fort Lauderdale, Florida. “In 2009, Pinmar decided to enter the U.S. market, working closely with the shipyards, expanding the service that the company offers to the fleets of mega-yachts that travel the world. The Company wanted to have an outlet in the U.S. side that would be able to service and maintain the same European service to the yachts in the Caribbean, Bahamas or Florida.”

Although the community of mega-yacht owners may be small in comparison to the overall population of the world, Burgess says that the company is expanding to the U.S. simply because the demand is there. “We have between 100 and 150 yachts that regularly come to Pinmar for their paint work,” he reports; “anything from 100-200 foot, all the way up to 550 foot – the largest yachts on the planet. We have a base of faithful clients that will come back to us every three to five years. As such, we have a lot of new business that comes from being the leading brand in the industry and wanted to expand this in the American market.”

Today, Pinmar USA has around 45 permanent staff that could double, seasonally. Across the globe, the GYG Group has between 400-500 employees. GYG owns a portfolio of superyacht painting brands including Pinmar, Rolling Stock, and France-based ACA Marine. Collectively they offer services across the globe and have painted some of the largest superyachts in the world. “It’s mainly re-fit in the U.S. with a few select  new build and conversion projects; and in Europe, we’re around 75 percent  re-fit and 25 percent new-build in terms of annual revenue,” Burgess explains. “Pinmar and Rolling Stock would be contracted to go to shipyards, whether in Germany, or Holland, or France, or Italy, and they would work on a brand new hull, whether it be steel or aluminum, or even glass fiber, depending on the type of yacht and where it’s built, managing everything from the raw surface of the metal all the way up to the fairing and finish gloss paint.”

GYG also owns Techno Craft, a European company that supplies all the scaffolding and containment coverings used when yachts are serviced. “These boats have to be covered to protect them, and also to contain the fumes and dust, so that everything passes the environment requirements,” Burgess says. “We also have Pinmar Supply, which is a large chandlery in Europe that supplies all the yachts with its requirements such as painting supplies, cleaning supplies, or anything to do with yacht maintenance. Burgess says that plans for the U.S. operation include mirroring what the Group already has in place on the other side of the Atlantic. “We have ambitious growth plans for Pinmar USA so we are always on the lookout for business development opportunities.”

Those plans may now be put into overdrive, as GYG just recently became a publicly traded company on the London Stock Exchange. “The whole idea behind the company wanting to become public was to get the new investment and the backing to push forward our strategy in a big way,” Burgess states. “The USA has a growing superyacht fleet and Pinmar is intent on exploiting that market growth. We are well positioned with operations established in all the leading refit yards in both Fort Lauderdale and West Palm Beach, whilst opening new facilities in Savannah, Georgia. We want to establish our market leadership here to a similar position in Europe, where the company does have the reputation of being the largest paint refinishing company in the world. We want our clients to know that when they’re on this side of the ‘pond,’ that they have the same service and the same excellence of finish that they would get over in Europe.”

Apart from being the biggest, Burgess says that being the best at what they do makes Pinmar attractive to shipyards that use their own workers for paint jobs. “There are two or three shipyards that are now just starting to see the potential of bringing Pinmar in, instead of using their own in-house staff that would have normally done all the fairing and paint work.” Another competitive advantage is the company’s warranty on both workmanship and the paint finish. “The discerning yacht captain and owner are now looking for a warranty that they can have wherever they are,” he says. “If the boat is on the other side of the world from where it was actually painted, it would have a backup warranty. There’s no other company out there that could do that.  So, we are different in the respect that we now have a global presence.”

Finally, Burgess believes that Pinmar USA stands out for its attention to detail and its professionalism in the marketplace. “We go the extra mile for the client,” he concludes. “And the clients that come to Pinmar tend to remain loyal to us, forming a strong rapport together. We never back down on any of our promises when it comes to warranty; they get the full cover whether they’re on one side of the pond or the other. Pinmar has a reputation of being a brand of excellence and reliability; it’s a brand that is synonymous with what yachting is all about, which is to have the best of the best. And we strive to be that.”

WHO: Pinmar USA
WHAT: A division of the GYG Group, the largest yacht refinishing company in the world
WHERE: Dania Beach, Florida
WEBSITE: www.pinmar.com/pinmar-usa

Axalta Coating Systems – Axalta Coating Systems, headquartered in Philadelphia, PA, develops and manufactures coatings for light and commercial vehicles, industrial, and refinish applications. The firm does business in 130 countries, has nearly 13,000 employees, and has more than 100,000 customers. – www.axaltacs.com 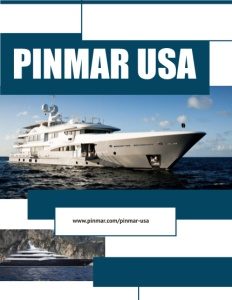