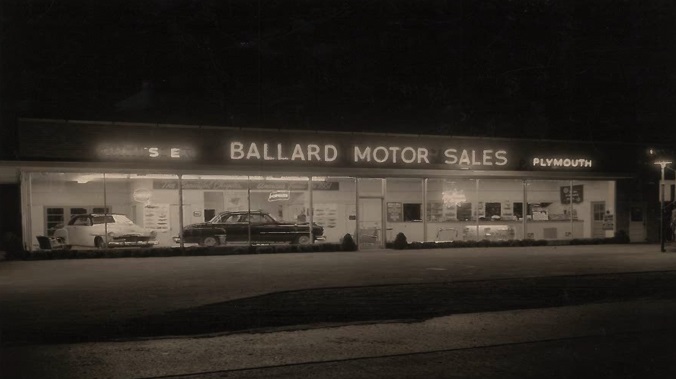 Ballard Truck Centers, a family-owned and operated business with four New England locations, began life in 1906 as a blacksmith shop in the small town of Millbury, Massachusetts. “I had a great-great-uncle who was a blacksmith and got into carriage repairs and then, at the dawn of the automobile, he transitioned into automobile repairs, and eventually, sales,” recounts Company President, Steve Grahn. That ancestor was Louis Ballard and the original name of his business was L.H. Ballard’s Garage, or as the locals would say: “The Ballards.”

Louis Ballard’s garage was the first automobile repair shop between Worcester and Blackstone – a distance of more than 40 miles. By the 1920s, as more and more automobiles hit the road, the repair business was booming. By the end of the decade, Ballard added a sales department – Fords, Chevys, and then, Chrysler Plymouths. In the 1940s, Louis’ son, Harold began working for his father, and by 1948, he and his wife, Minnie, began to take ownership of the dealership.

“My business partner is my cousin John Picking, and his dad worked for the family business,” Grahn continues. “Harold and Minnie never had any kids, so my mom, Janet Grahn, their niece, and John’s dad, Bob, their nephew, took over the business. In 1988, my mom, in addition to working as the accountant, also worked for an accounting firm that had a client who was a Mack Truck dealer. The woman’s husband had passed away and she had no interest in continuing to run the dealership, so Janet and Bob took a leap of faith and went into the truck business.”

Cousin John joined the firm in 1982, working at Ballard Motor Sales; Steve began working at Ballard’s first Mack dealership in 1988. Throughout the 1990’s, the 3rd and 4th generations of Ballards worked hard to transition from the car business into the commercial trucking industry, trading in light duty vehicle sales for heavy duty sales, while adding a variety of services along the way. In 1999, the company officially became the Ballard Truck Center. Then came acquisition and expansion. Today, Ballard Truck Centers serve all of Massachusetts, Rhode Island, and Eastern Connecticut.

“Our first location is in Worcester,” says Grahn. “The second location that we picked up in 2001 is located in Johnston, Rhode Island. It was originally in a different town, but in 2008, we started to put up a brand new facility closer to our customer base in Rhode Island. The economy was kind of in shambles at the time and it was a little scary, but it worked out really well. The third location we picked up was in West Springfield, Massachusetts – that was in 2010. And, most recently, we purchased a dealership in Avon, Massachusetts, which is just south of Boston – that was in 2011. So, it’s been a busy couple of years.”

Ballard Truck Centers represent Mack, Volvo, Isuzu, Hino, and Fuso Trucks. “The Mack and Volvo are considered heavy duty trucks; the other three brands are medium duty trucks,” Grahn explains. “On the heavy duty side, we sell to transportation companies and vocational businesses – construction companies that buy dump trucks or trucks to haul their heavy equipment from site to site; refuse is a very big segment of ours – trash trucks. On the medium duty side, almost any company is a potential customer. Recently we have made great strides in increasing our municipal sales.

“We do sales, both new and used, we do quite a bit of repair work and we have a very large parts business,” he continues. “We have outside parts salesmen that travel all around and try to drum up business; we’ve got 12 delivery vans that are out delivering parts. It’s a lot different than it used to be years ago – you wouldn’t deliver at all; people always came to you. But things are more customer-focused, now, and if you don’t deliver, somebody else will. You have to maintain a high level of service to keep the business that you have and grow the business that you have.”

Grahn believes that the company’s present success is based upon those same enduring values about service that began generations ago. “Both of our parents instilled in my cousin and me: ‘Do the right thing, be honest, and don’t worry about being bigger. Worry about being better, and bigger will take care of itself.’ And it has. Even though, sometimes doing the right thing costs a little bit of money, in the long run, it pays off through customer retention and loyalty. John came up through the service department; I came up through the parts department, so we ‘get it.’”

“And we certainly couldn’t do without the group of employees we have,” Grahn adds. “We have a very high retention rate, especially key employees and managers. But we keep stressing the family thing; we consider our employees as family; we have 30-year relationships with a lot of our customers and they become like family too.”

While long-time, loyal customers make up a good portion of the company’s client base, Grahn knows there is always a need to market proactively. “Two or three years ago, we hired a marketing person, and she concentrates on getting our name out there,” he says. “And we always try and stress the family-owned and operated part in all of the marketing that we do. The internet is huge. If you would have asked me ten years ago if we ever would have sold a truck over the internet, I would have said, ‘You’re crazy.’ Now, it’s real. You’re always getting internet leads, and a lot of them turn into sales.”

For now, Grahn says that there are no more immediate plans for further expansion. “We’re happy with the footprint we have,” he relates. “We certainly would entertain further growth – the three purchases that we made over the years to expand from one location to four were people calling us – but we do believe in putting money back into our facilities. We have one brand new building. Our main location is older; it’s been around for awhile and we’re constantly putting money back into it, investing in new technology and things like that. But, as far as something right over the horizon – no.”

Meanwhile, another generation of Ballards is being prepped to run the family company. “Both John and I each have a kid in the business with us, so we have the next generation, the fifth, in place,” Grahn reveals. “Both of the kids are in their mid to late twenties, right now, so it’s going to be awhile before they take over.” No doubt, though, when that time arrives, Steve and John will remind them of the number one principle that has sustained Ballard Truck Centers for over a hundred years: “Do the right thing. Be honest in everything you do, and success will follow.”

WHO: Ballard Truck Centers
WHAT: A family-owned and operated business with four New England locations
WHERE: Headquarters in Worcester, Massachusetts
WEBSITE: www.ballardtrucks.com

Isuzu Commercial Trucks – Isuzu Commercial Truck of America, Inc. (ICTA) is the North American subsidiary of Isuzu Motors. Headquartered in Anaheim, California, ICTA is the distributor of Isuzu commercial vehicles in the United States. Isuzu commercial trucks have been the #1 selling, low-cab forward trucks in America every year since 1986. The Isuzu N-Series low-cab forward (LCF) truck family is consistent of class 3-5 trucks, and the only low-cab forward lineup that includes two diesel engines and a gasoline engine that is CNG/LPG capable. – www.isuzucv.com 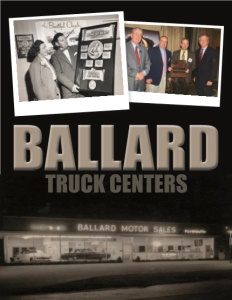