RWDI (Rowan Williams Davies & Irwin Inc.) is a wind and environmental engineering consulting firm, renowned for its expertise in engineering modeling and analysis. The company offers a range of services to help create buildings that are more efficient, sustainable, comfortable to inhabit, and resilient to natural disasters. It has conducted wind engineering on projects including the London Millennium Bridge, the International Commerce Centre in Hong Kong, the Petronas Towers in Malaysia, the Freedom Tower on the WTC Site, the second span of the Tacoma Narrows Bridge, the Taipei 101 Tower, and the mega-skyscraper, Burj Khalifa, currently the world’s tallest building.

Michael Soligo, RWDI’s President and CEO, recounts the company’s origins and growth: “The company was formed in 1972 by Bill Rowan and his neighbor, Frank Theakston, who was a professor at the University of Guelph. Guelph is in the province of Ontario, which had quite an extensive building code by the 1970s. But the University of Guelph, which is a renowned agricultural university, had noticed that a lot of farm buildings in the area were failing under snow loads. So, something was clearly insufficient about how the snow loads were identified in the building code. Rowan and Theakston decided to build physical models of farm buildings and submerge them in a water tank. The university, at the time, had something called an open channel water flume with running water. They would put particulate in that running water, which was just a very fine sand, and then that sand would fall out on the roofs of these agricultural model ‘buildings.’ That would let Rowan and Theakston identify snow patterns, and then, from there, they could predict more accurately the snow loads on the building. There’s a lot of physics behind it, but that’s the general concept. That’s the impetus of how we started.

“From that point on, our company, which has gone by several names over time, got into simulation of environmental effects. Today, we simulate many different environmental phenomena: snow, drifting snow, drifting sand, wind, solar impacts, noise – the list goes on. Some of our tools have remained remarkably similar over time; we just moved into a brand-new facility last year and it includes a new open channel water flume, not unlike the one at the university in 1972. But of course, we use much more advanced technology as well. We’ve developed computer software that simulates wind, and we use three-dimensional computer models to conduct wind and environmental impact studies. We also continue to do lots of model simulations of wind and other environmental impacts using physical models in our five state-of-the-art wind tunnels – three in Canada, one in the UK, and one in India.

“So, our niche has grown from snow to wind to every aspect of environmental study. Our meteorological capabilities are, at this point, probably our greatest strength. We can re-create past meteorological occurrences; we do forensic work to understand – if an accident has occurred or a structure has been damaged – how exactly those results have come about. We can also make extremely accurate predictions. Understanding the predictability of meteorological conditions in given surroundings, we can use physical and computer-aided modeling to predict future impacts of the environment on developments and people.”

Soligo reports that RWDI’s clients include developers, governments, architects, and engineers. “Those would be the primary ones, but we really work with anyone who’s interested in understanding the relationship between the environment and any type of development – high rise buildings, low rise buildings, medical facilities. We do a lot of work for laboratories and hospitals; they have particular needs with respect to managing their exhaust – so we help them answer questions like: ‘Where are those exhausts going to go? Are they going to come back into the building? What’s the concentration of them? Are they going to meet government standards? Are they going to create health issues?’

“We do work for the oil and gas industry because when they’re drilling new wells, sour gas can often emerge first, and depending on the directionality and strength of the wind, that gas can carry toxins to neighboring towns and cities and create very strong environmental impacts. We generate detailed predictions of wind conditions at the particular drill site at particular times so they can optimize their drilling schedules. The result is that they don’t go out there and spend hundreds of thousands of dollars and then get shut down a half an hour later by the Ministry of the Environment because it’s a gusty day and the sour gas immediately created a hazardous situation.

“In fact, we developed a methodology for the oil and gas industry that has since found a much wider range of uses. The City of Calgary found out about our detailed meteorological prediction system and they mandated that any development in the City needed to use it. The story begins several years ago, when a strong but unexpected wind came through the city, and contractors hadn’t had a chance to tie down all their materials. Sheeting and plywood flew off a building under construction and killed a little girl. So, the City said, ‘No more. We need a better warning system so job sites can tie down their equipment, and increase safety.’ Thus, our predictive method is used in the construction industry. Part of its value is that it’s so specific. We identify that the winds are coming, their speed and timing, and what they’ll be carrying, whether it’s rain, sleet, snow, or hail. And, we can be very specific about location: if you’re building a building on a particular corner, we can tell you what the wind is going to be like on that corner, two or three days in advance.

“The methodology has moved from oil and gas to construction and now to ski resorts in western Canada. They are using it for avalanche and snow prediction. The movie industry is also using our service increasingly to help them with scheduling outdoor scenes; delays are very costly, so we help them avoid scheduling outside scenes during periods with inclement weather. Our method is more powerful than any meteorological predictive method we are aware of anywhere in the world, and that’s why it’s gaining so much traction.”

Soligo says that RWDI’s fastest growing area is in building science: “A perfect example is the Burj Khalifa in Dubai. So far, it is the tallest building in the world. We did preliminary work on the structure and provided some feedback into both the external shape of the building and its orientation. Orientation was critical: by rotating the whole structure about 18 degrees from where it was originally going to be positioned on the site, they saved over 20 percent in wind loading.  That made the difference: it got them to the height that they needed to get to be the tallest building in the world.

“We also do a lot of sustainability work, including energy modeling and day lighting – looking at the reactivity of materials and how they might affect the environment from a glare perspective. This has become a very important aspect of design, because, in North America, we’re paying more and more attention to how much energy it takes to operate a building. Our studies help to identify how shapes, designs, orientations, material selections, noise, acoustics, vibration, air quality, wind, snow and rain, all affect a building’s performance. All those factors can also affect how much the building costs both in terms of initial capital outlay, and in terms of long-term operations.

“Another major area of our services is in damping systems for tall buildings. Designers have been making buildings taller and taller for decades. Today, they’re also trying to make a lot of buildings thinner because the footprints that they have to build on are very narrow. A damper system helps keep buildings from swaying too much, even when they are extremely tall and slender. There are a couple of reasons why designers need to control how much their buildings sway. One is to avoid too much motion thus affecting the structure. A less obvious but also very serious problem is that sway can cause people on the upper floors to experience motion effects. If you just paid $20 million for the penthouse suite, feeling nauseated whenever you’re up there is not going to be appealing.  Our ‘Motioneering’ department specializes in dampers that stabilize all kinds of buildings; tall, long span roofs, large flooring systems, bridges, stadiums, and the super-tall hi-rises.”

Regarding competition in the industry, Soligo says the following: “There are companies that do parts of what we do; there is no company that does all the aspects of what we do. And that really separates us. If someone wants a holistic understanding of the impact of the environment on their development – and a complete view of all the strategies they can use to optimize that development for its context – we’re really the only company that can provide all of these services. That’s what makes us unique. We started out in the small town of Guelph, Ontario, and now we’ve grown into the world’s largest niche environmental company of its kind. We’re doing work from the North Pole to the South Pole and everywhere in between. We have 17 locations around the world and we work on every continent.”

Consistently reinvesting in the company is another aspect that helps keep RWDI on top of its game. “There are a lot of advancements that we’re working on right now – we’re always aiming for that next level,” Soligo says. “We have a history of putting a major part of our profits every year into innovation and technical advancement, and that history continues. In fact, in the last few years, we put more money into technical advancement and innovation than we ever have in the history of our company. It’s important that we do so.”

Soligo also pays tribute to RWDI’s 500+ employees: “We hire and we seek out the top people in many fields around the world. It’s the top people who have a passion for what they’re doing. That’s why we’ve been successful for 45 years; that’s why we’ve been able to expand and innovate because we have a lot of highly intelligent people who are passionate about what they’re doing. That may be the most important thing.”

WHO: RWDI
WHAT: An environmental consulting firm
WHERE: Guelph, Ontario, Canada
WEBSITE: www.rwdi.com 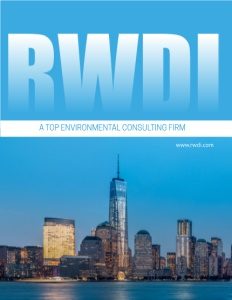