The Adirondack Bank Center – History was made here

Business View Magazine interviews Robert Esche, CEO and President of the Utica Comets, as part of its focus on best practices of American sports venues.

The Adirondack Bank Center at the Utica Memorial Auditorium, affectionately known as “The Aud,” is a multi-purpose arena in this upstate New York city of approximately 65,000. “The Aud was commissioned back in 1957 by Mayor John McKennan,” says Robert Esche, CEO and President of the Utica Comets, the American Hockey League (AHL) team that has called the Aud its home ice since 2013. “The lead architect was Gil Seltzer, who is still alive today and 103 years old, and a Russian immigrant by the name of Lev Zetlin was the lead engineer on the building.” 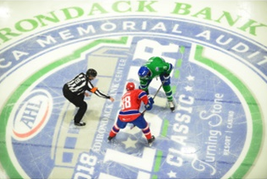 According to Esche, Zetlin’s immediate challenge was to create as light a roof structure as possible since the Aud’s site happened to be on land that was backfilled along the old Erie Canal, and soil compression tests showed that it would not tolerate a heavy building.  Zetlin came up with a radical design which became the world’s first pre-stressed, dual cable roof system. “It’s a cable tension roof system,” says Esche. “It’s like taking a bicycle wheel and turning it on its side. It ended up becoming a prototype for Madison Square Garden.” In fact, Zetlin’s design was the predecessor of many modern dome designs seen today, and in 2011, the Utica Memorial Auditorium was designated as a National Historic Civil Engineering Landmark by the American Society of Civil Engineers in recognition of its innovative cable suspended roof.

Dedicated to the memory of area veterans and the wars in which they served, the Aud opened in March 1960, and it was, at the time, one of only three arenas worldwide that had completely unobstructed views with no support pillars to see around. Over the years, the Aud served as a skating rink and events center, hosting various semi-professional, college, and high school hockey teams, professional boxing and wrestling, exhibition basketball, cheerleading and gymnastics competitions, and big name musical acts and shows such as the Grateful Dead, Bruce Springsteen, the Harlem Globetrotters, Monster Trucks, and the Ice Capades. In 1977, scenes from the movie, Slap Shot, starring Paul Newman, were filmed there.

The City of Utica operated the Aud until 1996, when it was sold to the Upper Mohawk Valley Memorial Auditorium Authority, a state-appointed body charged with determining policy and overseeing the operation of the facility. Unfortunately, over the next several years, the Aud continued to deteriorate, and in 2013, the Authority signed a six-year deal with Esche’s company, Mohawk Valley Garden, to manage the auditorium and book all future events, replacing the former operating company, Venue Services. “When our company came in, the Aud was in a very weak state,” he recalls. “It pretty much sat dormant for 16 years; there wasn’t a lot that was done to the facility, itself, and it was ready to shut the doors within 18 months.”

With $10 million promised by the State of New York for facility upgrades, Esche was able to entice the Peoria Rivermen, the AHL farm team of the National Hockey League’s Vancouver Canucks, to relocate and become the Utica Comets. In the first phase of renovation, a whole new façade was added to the building, two giant video boards were installed, and a new, state-of-the-art AHL locker room was built and outfitted.

“Our second phase, which was another state-funded $10 million, was finished this past November,” says Esche. Work included a 26,000-square-foot expansion and a new entrance to the building from a new, outdoor plaza, a new women’s bathroom, a building-wide sprinkler system, all new LED light fixtures, new offices, six new luxury boxes with room for up to twenty fans, and a separate box-seating suite, called Zuhaus, which means “at home” in German, capable of handling parties of up to 50. “It’s like a brand new facility,” Esche says. The new design can accommodate 3,924 for hockey games and anywhere from 5,300 to 5,800 for a concert. 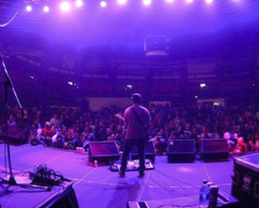 Esche reports that the Center presents a little over 100 events a year, including home games for the Comets and Pioneers and three to five major concerts, in addition to various other proceedings, such as local graduations. His company employs 54 full-time workers, a number which can swell to 250 on an event day. In terms of its operations, there are three different models that come into play: for self-promoted events, the company takes in all ticket revenue, concessions, and parking; for co-promoted events, revenue is shared; and if someone wants to come in and just rent the whole building, “we can do that, too,” Esche says.

Next up in Esche’s plans is the U District – a proposed arts, sports, and entertainment district, adjacent to the Center. “We’re done with rehabbing of the Aud,” he says. “So, we have a future vision for the area and we’re going step by step, one of them being the Nexus Center, targeting sports tournament-based play. We’re in a purchase agreement for the land next door to us.” In fact, the Upper Mohawk Valley Memorial Authority had only just acquired the former Tartan Textile property, a 1.9-acre parcel, just east of the Center, this past December.

Demolition of the textile plant is complete, with a groundbreaking for the Nexus Center slated soon. The design for the new facility involves three ice rinks that can be converted into playing fields. “Currently the Adirondack Bank Center has about 225,000 visitors a year,” Esche says. “The Center is projected to do about 350,000 visitors a year. That’s over half a million visitors coming to downtown Utica, which will allow restaurants, bars, and hotels to grow.”

Esche, who grew up in Utica and was a professional hockey player in Canada, the U.S. and Europe, before returning home to spearhead the revitalization of the Aud, and soon, the U District, says that the renovation of the building and the institution of AHL hockey in Utica have rekindled a sense of civic pride in the city. “We’ve sold out for 122 games, now,” he states, “and it’s really given our area a shot in the arm. It’s been a catalyst for growth and revitalization and all of us here are very proud of it.”

WHO: The Adirondack Bank Center
WHAT: A multi-purpose sports and events arena
WHERE: Utica, New York
WEBSITE: www.theuticaaud.com 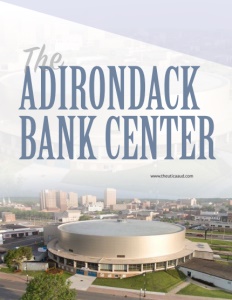