Known as “The Queen City of the Valley,” Mercedes, Texas was founded by the American Rio Grande Land & Irrigation Company in 1907 and is one of the oldest towns in the Rio Grande Valley. Mercedes takes full advantage of its ideal location in Hidalgo County, part of the McAllen–Edinburg–Mission and Reynosa–McAllen metropolitan areas and only four miles from the Progreso International Bridge. This proximity to a major port of entry, along with air, rail, and freight services – and a pro-business attitude – enhances the city’s appeal to a wealth of industries, suppliers, tourists, and retail centers.

Sergio Zavala, Mercedes City Manager, reports, “In a city this size (just under 19,000 people), we regularly have to assess infrastructural needs that have to be upgraded or replaced. That assessment happened last year and with the help of the City Commission, we secured Certificates of Obligation so we could go ahead and get some of those needs done. One thing we did was to extend our water line to the adjoining City of Weslaco’s water system – we refer to it as the Water Line Interconnect. What that means is, there was a component of Mercedes along a major commercial street that did not have potable water and now they do, which opens up the value of the property because when you don’t have water, it’s very difficult for developers to maximize the commercial potential of the acreage.” 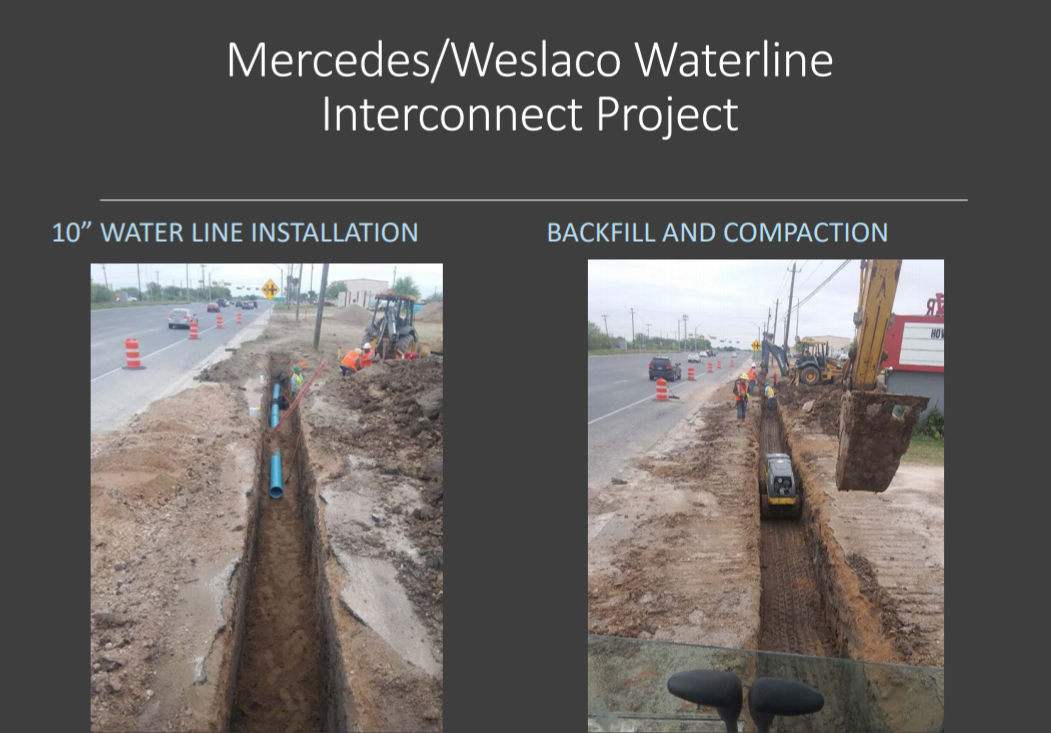 Last summer, Mercedes was hit by a storm that lingered over the mid-Valley area. It was dubbed a 500-year storm because such a thing hadn’t happened in a very long time, and it gave the city a red flag on things that needed to be done. As a result, they obtained Certificates of Obligation for storm sewer improvements to maximize the outflow of stormwater into floodways and appropriate ditches. Also, the City secured some heavy-duty pumps, so whenever they experience standing water – especially in residential areas – it can be outflowed into the proper canals and ditches.

When it was also discovered that certain neighborhoods had never had sanitary sewers, those too were assessed and have recently been extended with sewers. Those residents are, of course, extremely happy, since not only is it a health and sanitation issue but it also improves property values. Another issue of note: there was an old water well that had been dormant for many years, and when the city was alerted about a possible water capacity issue, the powers that be went ahead and explored the potential of reactivating and restoring that water well. Thankfully, work on the well is already underway and should be finished by the fall of this year. According to the city engineer’s report, the well should distribute about one million gallons of water per day once it’s activated, which will help the community, tremendously.

Zavala notes, “We also have an ongoing infrastructure project for the restoration of 12 lift stations for the sanitary sewer, so those stations can be upgraded to maximize efficiency for our systems. Then there’s the street infrastructure, which is a circus. We invested $3.5 million into the overlay and/or new construction or reconstruction of 48 current city streets that needed a lot of work. For a city our size that’s a tremendous facelift for our community. We also discovered a long lead of a water line that does not have a second source, and that water sometimes becomes unhealthy. So, we approved a project to loop that water line, at a cost of about $160,000. It means we won’t have stagnant water anymore; it will be perpetually circulating. Those are just some of the infrastructure projects we have going on now.”

The Development Corporation of Mercedes is a publicly-funded, non-profit corporation established to create jobs in the city by attracting new industry and business, as well as assisting expansion of existing companies. Executive Director of the Development Corporation, Melissa Ramirez, shares, “Over the course of about three years, Mercedes has focused on industrial development and increasing rooftops throughout the community. That has added about $40 million of construction projects to the city and the tax base. Those projects are city-driven/EDC-driven, so we’ve become a resource partner for developers. The largest project in recent times is the FedEx facility which is anchored in our Mercedes Light Industrial Park and will bring about 125 jobs to the community, this year. The park is owned by the City of Mercedes and the Mercedes EDC, and we’re actively marketing it.”

The City also has a new, 128-unit, luxury apartment complex under construction with easy access from the expressway. The Raybeck development is valued at about $6.8 million and slated for opening in the fall of 2019. With those two projects, and others in the pipeline, the EDC hopes to increase retail development. Currently, Mercedes has an Outlet Mall with over 130 stores and the goal is to have more retail businesses nearby to complement the Mall. 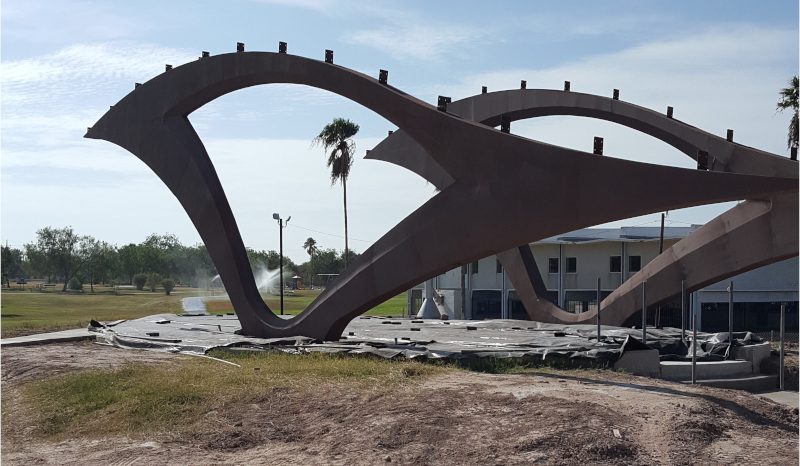 Ramirez adds, “We also have a significant Rio Grande Valley Livestock Show that is known as a scholarship program for youth. Kids raise an animal all year, then bring it to the show and sell it. The experiences teaches them about responsibility, finances, and it’s a huge draw for the community during March. The Livestock Show grounds are open year-round, so they have a variety of events targeting specific demographics; Winter Texan events, family-focused events, concerts – we’re the fourth largest rodeo in Texas.” The Livestock Show has been a valued partner with the city for over 70 years, bringing in hundreds of thousands of visitors and providing a huge economic boost to Mercedes.

Location, location, location is the ultimate asset for Mercedes; being geographically located in the dead center of the Valley, 10 minutes from the Mexico border. Major employers include the School District, H-E-B, and LNG Engineering, and once they ramp up – FedEx. According to Zavala, “Regarding FedEx, to give an indication of how big a feather that is in our cap, the building value is $16 million but their equipment value is at $25 million, so that’s a significant number for a city our size. We’re also pleased to have another business coming in – DaVita Kidney Care has a $1.3 million building, also in the Mercedes Light Industrial Park.”

The population of Mercedes has been fairly stable for several years, however, in the past 12 months there have been several good-sized residential subdivisions on tap for development, along with infill in the city center area. In order for a jump in population to occur, a subdivision needs to be completed and fully occupied, so that will be about 12 to 18 months. Enhancing the quality of life, the city invested about $250,000 in the Mercedes H-E-B Park – a combination civic center, a park with pathways, and a recently-constructed amphitheater. The venue will be a gem of the community; looking great in the daytime, beautifully lit at night, and they’re also going to add a splash pad for the kids.

City Commissioner, Leo Villarreal, speaks to other important environmental projects. “We started a waste collection station where citizens can take trash, tires, brush, electronics, and anything else not picked up by our Waste Management. There are also recycling bins for plastic, paper, cardboard, and it’s all in one location. As for going green, we are in the process of acquiring solar panels for the library, the city hall, the police department, and other buildings, so in the case of an emergency, when power goes down we also have a solar power backup. That is ongoing now.”

Looking ahead, Zavala states, “Over the next five years, I would like to see continued improvement of the infrastructure. A lot of folks don’t understand because much of it’s underground, but it’s important because it provides for immediate development of the adjoining areas and improves property value. The County of Hidalgo passed a huge bond issue of $220 million and a lot of those moneys will be benefitting Mercedes in the next couple years. And that’s for storm purposes, because if they can capture storm water upstream, we won’t have to deal with it.”

Offering Tax Increment Investment Zones, Opportunity Zones, and an abundance of commercial and industrial space, Mercedes is ready to accommodate operations, large or small. With such a competitive, business-friendly environment and a focus on an excellent quality of life for residents, it’s no wonder Mercedes is touted as the best city in the Rio Grande Valley to live and do business.

West Springfield, Massachusetts – Sitting at the...