Nationwide Boiler Inc. pioneered the first trailer-mounted watertube boiler in 1967, marking the start of the rental boiler industry as it is today. Since then, plant operators and owners have relied on the company to deliver high-quality, dependable boiler solutions to support both planned and unplanned boiler outages, as well as new and retrofit boiler equipment projects. Nationwide Boiler’s large selection of inventory includes rental, new, and refurbished/used boilers, emergency boilers, mobile boiler rooms and temporary steam plants, ancillary equipment, and emissions reduction equipment – everything needed to help customer operations run smoothly and efficiently. Readily available for delivery anywhere in the world, Nationwide’s boilers are superior in quality and guaranteed best performance on the market. 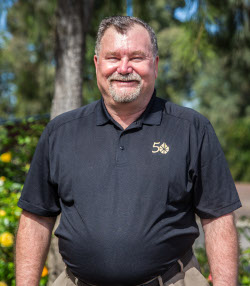 Larry Day, President of Nationwide Boiler Inc., describes the firm’s interesting backstory. “Our company was founded 51 years ago by Richard K. Bliss, a boiler inspector for the well-known insurance company, Hartford Steam Boiler. Bliss realized that not one company in the marketplace was offering complete temporary solutions when a facility’s boiler was out of service for annual inspections or repairs. Bliss saw an opportunity and became a pioneer in today’s rental boiler industry, which was in its infancy back then.”

At the time, there were a handful of service companies providing old locomotives taken out of service or used boilers taken in on a trade, but there were no full-service rental boiler companies and no statistics on the rental boiler business. Bliss had a vision that instead of relying on these used or rebuilt boilers for temporary steam supply, he would buy a fleet of brand-new boilers built and maintained specifically for rental use. These boilers would be mounted on trailers for mobility, able to move to a customer facility on a moment’s notice.

Pursuing his dream, Bliss convinced his wife to sell their house and use the money to buy his first two boilers. That was the start of Nationwide Boiler Rentals, which was later re-named Nationwide Boiler Inc. in 1980. Today, Nationwide boasts a fleet of over 100 boilers and nearly $70 million in assets. While rentals comprise about fifty-percent of the business, the company also sells boilers and other steam plant equipment, in addition to buying good-quality used boilers that it reconditions for resale. From a one-man operation at the start, to over sixty employees today, Bliss’s early entrepreneurship is truly inspirational.

Nationwide Boiler’s headquarters are in Fremont, California, but its territory is worldwide. The company has supplied boilers to customers on six continents and currently has projects in Saudi Arabia and Africa, regularly does business in Mexico and Canada, and has previously done business in Malaysia, China, Australia, South America, the United Kingdom, and other parts of the Middle East. In the boiler rental sector, Nationwide is the largest rental company west of the Mississippi, however, it also has partners that store and help maintain its boilers in multiple locations across the United States. These facilities are located in Pennsylvania, Michigan, Ohio, North Carolina, Oklahoma, Alabama, Iowa, and Washington. This strategic initiative allows for quick shipment and cost savings for the company’s rental customers.

The first acquisition in company history was made last year. According to Day, “They were one of our key vendors – Pacific Combustion Engineering. They had supplied most of our control panels and fuel skids for about seventeen years. The owner of the company was ready to retire, so we jumped at the opportunity to bring them into the Nationwide Boiler fold. We now have the in-house capability of providing custom PLC controls and related combustion equipment to our customers. It was a strategic acquisition for growth in an area where they were strong, and where we could expand on our capabilities.”

“Since boilers were first brought to market, we really haven’t seen many physical or mechanical changes,” Day Continues. “However, there have been some improvements on the tech-side, with new touch-screen controls for instance. Being one of the premier companies in building sophisticated control panels and combustion systems, we felt that acquiring Pacific Combustion Engineering was the perfect opportunity for us to expand and grow, not only our product and service offerings, but our company as a whole.” 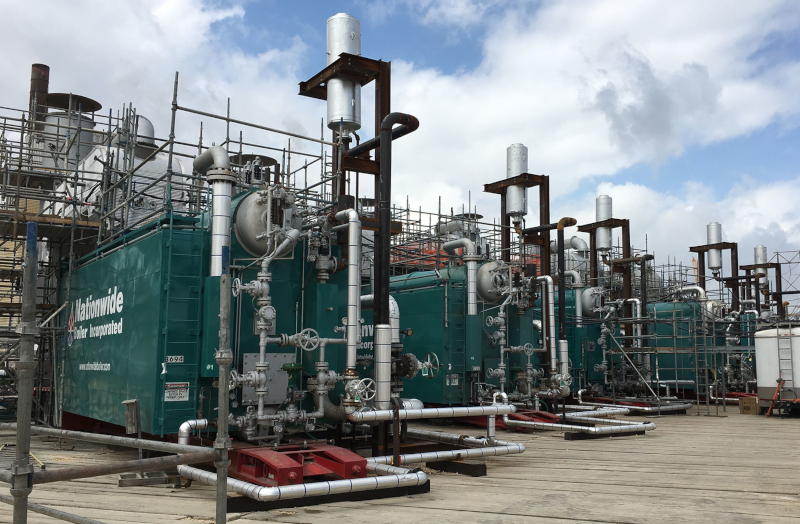 Employment at Nationwide Boiler has increased by fifty-percent in the last 10 years. Nationwide Boiler now has a sales office in Visalia, California, its controls division, Pacific Combustion Engineering, in Washougal, Washington, and sales representatives in offices around the country. Typical customers include large industrial facilities such as refineries, petrochemical companies, pulp and paper manufacturers, and food processors. Major food processors make up a good portion of its customer base, which could correlate to the fact that ninety-percent of tomato paste in the U.S. is made in the Central Valley of California.

The company also supplies equipment to small industrial and large commercial facilities including hospitals and large medical centers, colleges and universities, and district heating providers. One of the most notable projects in the company’s history was in New York City after 9/11, where Nationwide supplied boilers to Con Edison at Ground Zero to help heat lower Manhattan after a 20-inch steam line was severed by the towers’ collapse.

The company utilizes a number of resources for the promotion of its products and services to end-users. Chelsey Ryker, Nationwide Boiler’s Marketing Manager, notes, “We attend many trade shows, conferences, and other industry events throughout the year, almost on a monthly basis. Ultimately, we are exhibiting at, and attending, these industry events to promote our company to end-users, network with new and past customers and vendors, and gain insight into the current marketplace.”

Additional marketing initiatives include trade journal advertising, providing feature content for industry magazines, and email campaigns including newsletters, inventory lists, and product spotlights. “The past few years, we have been focusing more on digital marketing,” Ryker shares. “We updated our website last year to integrate all three divisions of our company – boiler rentals and sales, emissions & efficiency control, and combustion control systems. We have also spent a lot of time and resources on enhancing our SEO to ensure that we are at the top of each search engine when people are looking for rental boilers and related equipment. Looking ahead, we would like to begin focusing on educational video content as a resource for our end-users.” 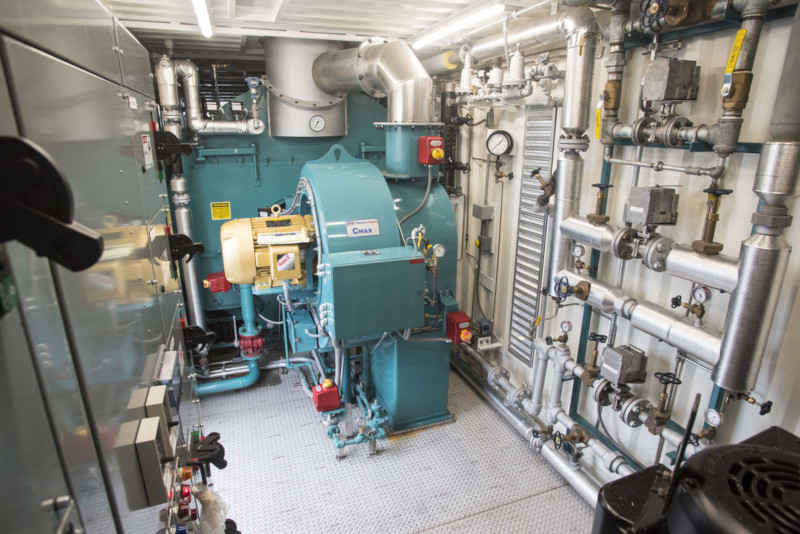 Nationwide Boiler is proud to be an innovator in the industry, pushing the envelope and working with manufacturers to solve customer problems and bring new, innovative equipment to market. “We tend to have the latest and greatest, as far as the biggest boiler on wheels, and equipment with the lowest emissions in the country,” says Day. Nationwide Boiler pioneered the largest trailer-mounted, saturated steam boiler at 120,000 lb/hr, and has, in recent years, branched out, bringing to market the new “world’s largest” mobile boilers, including a 125,000 lb/hr high pressure, saturated steam boiler, and a 110,000 lb/hr high pressure, superheated steam boiler.

“Being a California company, we feel we’re ahead of the curve for low emission equipment that meets not only federal standards, but California’s strict emissions standards,” he adds. “This includes both low carbon footprint and reduced greenhouse gases. You could say that we are the greenest company in the rental boiler industry. One product that we are really proud of is our CataStak selective catalytic reduction (SCR) system, for NOx reduction as low as 2½ ppm.”

The SCR process is similar to that of a catalytic converter, which reduces emission output from a car. On a larger scale, it is installed at the tail-end of the boiler system, gas turbine, fired heater, or other fired equipment application. The system initiates a chemical reaction within the catalyst that can reduce emissions output by over 90 percent. “As a selling point, we like to make it known that we were a user before we decided to bring it to market for permanent applications,” Day reports. “We actively used our CataStak SCR systems on the boilers in our rental fleet, proving the superior performance of the CataStak compared to ultra low NOx burners and solidifying our presence in the market.”

Nearly eight years ago, the company added to the development of the CataStak, introducing the ammonia-free option. Day notes, “SCR systems utilize ammonia as the standard NOx reduction reagent. However, we can now substitute the use of ammonia for a 32.5% liquid urea solution, commonly known as diesel exhaust fluid (DEF). This alternate option eliminates the HAZMAT requirements that are tied with the use of ammonia, allowing customers to experience the proven, superior performance of our CataStak SCR system without the hassle of storing and handling ammonia.

“Although we have been selling our Ammonia-Free CataStak for quite some time, this year we were the first rental boiler company to provide urea-based SCR systems with our units. We currently have multiple rental customers utilizing these systems, and have built an inventory for future use. This is a big step in our industry, and we look forward to providing urea-based systems for many more rental applications.”

Nationwide Boiler continues to innovate and bring new products to the market. This includes its recent development, the DataStak Monitoring System. This is a standalone device that monitors emissions, efficiency, and the overall carbon footprint of a boiler system in real time. Facility engineers can now have this information at their fingertips, at a fraction of the cost of traditional CEMS equipment. The DataStak was developed about two years ago and is now available for both rental and permanent use.

Day believes the biggest challenge currently affecting the boiler industry is climate change and the push to get away from carbon-based fuels. “Fossil fuels will continue to be utilized for a long time; 95 percent of our boilers are natural gas fired,” he notes. “Even though it’s considered a clean fuel, it’s still carbon-based and produces greenhouse gases. With that said, we are constantly working to improve both the efficiency and emissions performance of our boiler systems to meet the demands of both our customers and federal and state regulations.”

Looking to the future, Day shares, “We’re a small company with a big company name, and we go by the motto, ‘Integrity, Dependability, and Real Customer Service.’ These values are important to us. We have a really high repeat customer base, so when we secure a customer, they typically come back. We like to think that we go to work after the sale. Some of our competitors do a great sales job but fall down after the sale. That’s when we hit the ground running.”

Check out this handpicked feature on Cameron Manufacturing & Design, Inc. – More than a job shop.

WHAT: An industrial boiler sales and rental company

WHERE: Headquarters in Fremont, California

Superior Boiler manufactures a full line of firetube, watertube, and commercial boilers as well as deaerators, blowdown separators, and other ancillary boiler room equipment. Our products are made in the USA and have provided efficient and reliable operation since 1917. We take great pride in the quality of our vessels, they are the most rugged in the industry and are built to exceed stringent ASME Code standards.

Why Warehouse Automation is Gaining Momentum in... 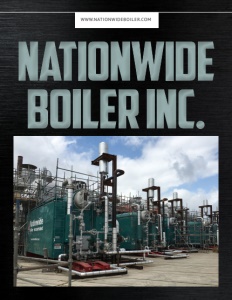