It’s hard to believe that anyone could have a warm, fuzzy feeling for a convention center. In most places, these glass and steel, cavernous buildings with their endless function rooms and long halls with industrial carpeting, seem rather sterile and removed from the communities they inhabit. Their job, most usually, is merely to act as transient holding pens for the conventions, home shows, and other events that show up, dazzle for a few days, then pack up and leave town. They may generate jobs and income for the locals, but the emotional bond is not often there.
On the other end of the spectrum is the Allen County War Memorial Coliseum in Fort Wayne, Indiana – as much a part of its community as a building could ever be. In fact, it was members of the Fort Wayne community, themselves, who, in 1944, conceived the idea as a project that would both commemorate those who gave their lives in service during World War II, as well as serve as a civic center and venue for community functions such as sports events and concerts.

The citizens of Allen County warmed to the idea and a county-wide referendum on the Memorial Coliseum passed in 1946, despite its $3 million price tag. Ground was broken in 1950, and the building opened in September 1952 as a ten thousand seat arena and fifty thousand square foot exhibition facility. The Allen County War Memorial Coliseum quickly became the site of major professional and amateur sporting events, circuses, ice skating shows, religious gatherings, political rallies, civic and school events, and patriotic observances. In many ways, it reflected the heart and soul of the community through the events that it hosted. Still owned by Allen County, today, the Memorial Coliseum serves the tri-state area as a focal point for family entertainment, arts and culture, sports, and community gatherings. It draws visitors from all over the Midwest and has earned its reputation as one of the most successful facilities in the country.

Randy Brown is the General Manager of the Allen County War Memorial Coliseum. One of his responsibilities is “to keep the facility relevant and maintain the physical plant as a state-of-the-art complex.” Brown possesses an encyclopedic knowledge of all the Coliseum’s expansions and upgrades over the years – numbers, included. “The first major renovation occurred in 1988-89,” he begins. “At that time, an exposition facility called the Expo Center was added with a gross square footage of about 250 thousand square feet of new space. At the same time, the arena was renovated.” Brown says that the Expo Center cost $27 million and the renovation of the original building came with a $7 million bill. “That turned us from a so-so exhibit player to a much bigger regional player – number two in the state of Indiana,” he adds.

“In 2000-02, we did a $34.5 million renovation of the arena and we actually raised the roof – a 41-foot, 10-inch raise,” Brown continues. “It took our seating capacity to nearly 13,000. We added 24 suites and 318 club seats – a total, top-to-bottom modernization of the facility.” Other renovations continued. “We’ve gone through every rest room in the arena and taken them down to the studs,” he says. “LED lighting; touchless fixtures; Corian countertops; tile floors; stainless steel toilet partitions. There’s one last expansion that we just finished in December 2015. We added a conference center with a gross square footage of 60,000 square feet. The big room is just over 27,000 square feet with 18,000 square feet of pre-function lobby space. It has a 29-foot ceiling, LED lighting, and very high-tech theatrical lighting. It’s another type of facility within our arsenal.”

And Brown has plans for more improvements. “This summer,” he says, “we’re tearing out the concrete in front of our main entranceway and putting heated sidewalks in so that, in wintertime, we don’t have to worry about having to plow the sidewalks – they will automatically be warm. It’s a better safety situation, and it will also create some outdoor exhibit space. We’re also renovating our main ticket office. And lastly, all of the arena dressing rooms will be renovated.”

And still more. “Within the next three years, we want every light in the complex to be LED; we’re about halfway there, now. We’ve got a million square feet under roof, so it’s no small endeavor to convert everything,” Brown says. “I don’t see us building in the next five years outside the four walls, but I see us continuing to do facility improvements, renovations, technology upgrades, and all those things. And we’re fortunate to have the funding in place to be able to do that.”

The funding to which Brown alludes is actually several sources of community financing that, together, generate $2.6 million per year for the Allen County War Memorial Coliseum’s capital projects. “We have our own TIF (Tax Increment Financing) area,” he says, “where the tax dollars from the state sales tax, the county food and beverage tax, the state income tax on employees, and the county income tax on employees is returned to us.” For the citizens of Allen County, Indiana, the investment is a prudent one since, according to Brown, the economic impact of the venue is in excess of $100 million a year to the greater community, in addition to a total of 500 full and part-time jobs.

And of course, the Allen County War Memorial Coliseum gives back to the community in ways other than jobs and dollars. “We are still a war memorial,” says Brown, “and everything we do is with veterans in mind. We support the veterans with events on Memorial Day, Veterans Day, Pearl Harbor Day. Parades are started, or end here, at the Coliseum. There’s an area of the building off the arena that’s called Memorial Hall. It has a number of plaques with names of those people who lost their lives in wars and conflicts. That relationship with the veterans is something we hold dear and we want to make it stronger with every opportunity that we can.”

Brown notes that the Allen County War Memorial Coliseum also serves as the community’s major evacuation site. “When things go wrong, whether it’s bad weather or some catastrophe in town, like a fire, and people have to be evacuated, we’re frequently called into action,” he says. Indeed, during the catastrophic flood of 1982, which put Fort Wayne on the national map, the Memorial Coliseum served as a shelter and command post for relief efforts. Brown says that when disaster strikes, the Coliseum employees provide food and beverages, as well as a phone bank, so that people coming in for shelter can call their loved ones and let them know they’re safe. “So, there’s a real connection within the community for the Coliseum,” he adds.

It would be impossible to list all of the entertainment legends that have appeared at the Coliseum over the years, much less all of the thousands and thousands of sports events, ceremonies, weddings, graduations, shows, concerts, exhibitions, and other programs that have passed through its halls. “Last year, we did 1,350 events,” Brown exclaims. “We’ve gone 25 consecutive years now hosting over a million guests per year. We have two sports teams – the Komets of the East Coast Hockey League have been with us since 1952; the Mad Ants is our basketball client – that’s the NBA Development League; our last sports client is a women’s flat track roller derby team known as the Derby Girls.” The Coliseum also once also had a minor league baseball stadium on site, which was eventually torn down after several years of hosting the Fort Wayne Wizards of the MLB’s A League. “When I talk to colleagues across the country about the activity level of this venue, some people think I’m fibbing. But we are just doing an unbelievable number of events and attracting an amazing number of guests per year.”

In it sixty-plus years, The Allen County War Memorial Coliseum has been an integral part of the lives of Fort Wayne residents and their neighbors. Frank sums up its importance to the local community by pointing out the emotional bonds that have been forged over generations: “Hockey is the best example of this,” he states. “Our hockey team’s been here for 64 years, so you think you’d have mom and dad who would bring a boy or girl to a hockey game. Well, we’re at a point now of not just having grandparents bringing grandkids – it’s great grandparents bringing the great grandkids. And we always do a traditional Thanksgiving game; we always do a New Year’s Eve game. And we host approximately 20 graduation ceremonies, here, so the probability is that the kid or grandkid has, or will have, his or her ceremony here. These are special family moments. A lot of memories have been made here at the Coliseum.”

Check out this handpicked feature on Sun Prairie, Wisconsin – The best of both worlds.

WHAT: A 13,000-seat multi-purpose arena and war memorial 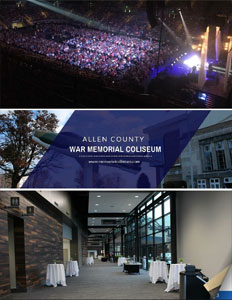