Business View Magazine interviews representatives of Commerce City, Colorado for our focus on Economic Development and Growth in U.S. Cities

Commerce City is a northern suburb of Denver, Colorado’s capital,  which had its humble beginnings in 1859 as a trading post selling meat and other supplies to gold prospectors. Since then, the community has welcomed a diverse residential base and has had an eye for business. The area grew a reputation as an agricultural hub until the late 1920s. The city’s population and industry steadily increased after incorporating as a city in 1952. Today, it is home to 62,400 residents and 1,700 businesses.  Impressively, Commerce City maintains a friendly small-town atmosphere, while focusing on future expansion.

“I’ve been working for Commerce City for about eight years,” shares Economic Development Director, Michelle Claymore. “The people who grew up and still live here love engaging with their community. We’re a rapidly changing city too, with so much growth. During the pandemic, while development in many communities across the country slowed down, we experienced the opposite.” City Manager, Roger Tinklenberg adds how Commerce City is also changing in terms of diversity. “It’s not just white suburbia here. We have a significant Hispanic population, including recent arrivals and families that have been here for generations. We also have Russian residents as well as many other internationals. We anticipate hitting a population of 80,000 by the end of 2025; a massive difference from the 21,000 recorded by the U.S. census of 2000.” 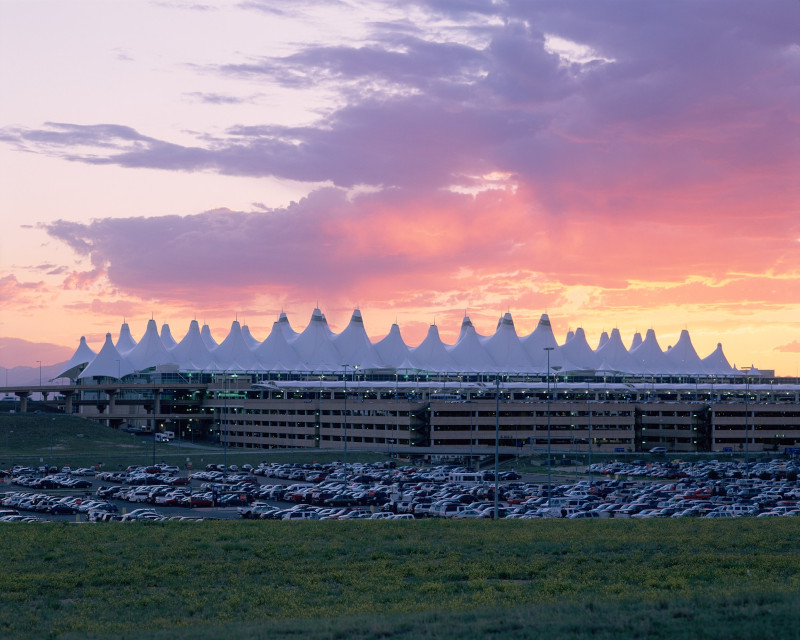 The city can anticipate and prepare for this growth because of the significant amount of land yet to be developed. During the last several years, an average of 1,000 new units  were permitted annually for residential housing, especially for single- and multi-family homes. One such project is Reunion, an Oakwood Homes Community. Currently under construction in the city’s northern range, the 3,000-acre development is a residential community with some mixed-use and commercial areas. It includes parks, trails, pools, and a recreation center. On the other side of town, Delwest is redeveloping the former Mile High Greyhound Park. This mixed-use development will offer duplexes and townhomes as well as apartments both below and at market rate. The redevelopment also includes land for a new hotel and other commercial and civic development.

Developers are actively looking for buildable land in Commerce City because of the city’s proximity to Denver International Airport (DEN) – one of the world’s busiest airports. DEN is a major employer for the area, along with a flour mill and several food product manufacturers. “Ardent Mills has been in the community a long time and is even part of our skyline. They produce flours for many of the country’s baked goods,” states Claymore. “There’s also Asahi Foods, a Japanese company that imports fish to process for most of the sushi restaurants in the Denver area. When you slice raw fish for sushi, it requires a high level of skill mastered through rigorous training. These companies are two examples of the many diverse and unique companies that are located in Commerce City, along with a large cluster of transportation and warehousing operations.”

However, this is not that random, considering the school districts in Commerce City offer Careers and Technical Education (CTE) programs. One of Adams County School District 14’s most popular CTE tracks is in the culinary arts. Claymore reports, “Students practice in Adams City High School’s commercial kitchen. This program really prepares the next generation of chefs, food truck operators and restauranteurs.” Programs like these would not be possible without partnerships, which Claymore says the city is “always open to” because strong partnerships solve problems and help get things done!

A current collaboration involves the area north of Interstate 70 where Denver’s transit, Regional Transportation District (RTD), has been expanding over the last 20 years. Commerce City has a new station stop along the North (N) Line or North Metro Rail Line. “We have one station, the 72nd Avenue station, the second station stop going northbound from downtown Denver,” clarifies Claymore. “There’s been discussions with landowners, RTD, the county and the school district on community opportunities around the new station stop. What will it look like over the next two decades? What revitalization efforts can we start now?”

These types of proactive discussions are important, because the city’s downtown district, locally known as ‘the old town of Derby’, is less than eight miles away. During the 1950s, Derby was the place everybody went for entertainment whether it was being served dinner from the roller skating waitstaff at the drive-in diner or renting a lane at the bowling alley. Even though it has changed a lot since then, it remains a popular business-centric area. Only now, the area includes a number of Latino business owners and operators. For example, El Jardín Restaurant has been a Derby staple for the last 39 years and is well known throughout the area. Claymore shares how Derby is being revitalized through restoration. Specifically, promoting its original 1950-60s aesthetics through lighting, signage and architectural design standards referred to as “googie”. There are also efforts underway to preserve three iconic murals that display some of the history and character of Derby. 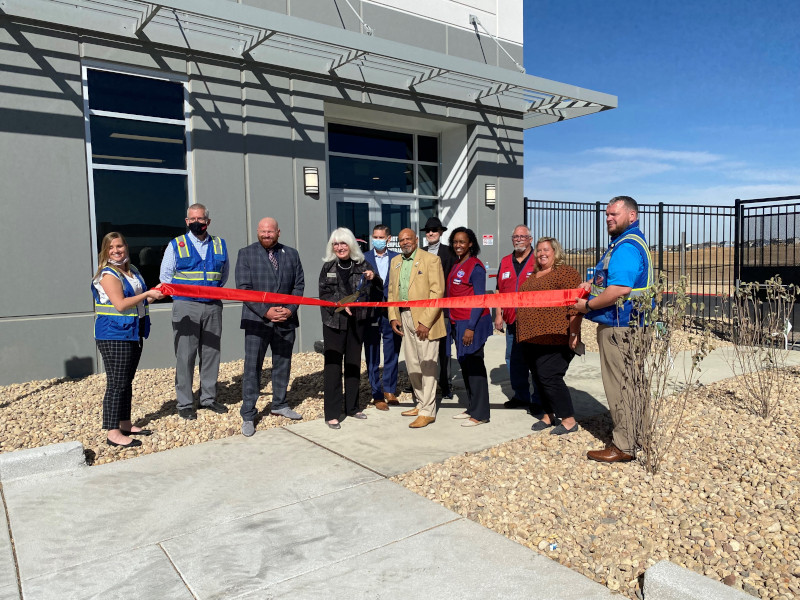 In addition to this revitalization, the city’s infrastructure is always being improved such as widening two-lane roads to be four-lane arterial streets. Tinklenberg reports that the South Adams County Water & Sanitation  District provides water and sanitation services as a separate entity from the city. “We work closely with them to meet the demand for new development. We’ve completed cooperative projects, where we use a special district to help pay for improvements like water main extensions. They’re putting in a second system for irrigation water and they’ll provide potable water for drinking. They’ll parallel it with an irrigation water distribution system that provides untreated water for irrigation.” In terms of innovation, he cites how in 2021 they finished construction on The John Ennis Water Softening Plant, which removes minerals from the water. “We also have several drainage projects because we have multiple creeks draining towards the South Platte River. Each one needs its own regional detention basin. So, those are in various stages of planning and construction.”

Commerce City’s Comprehensive Plan outlines future land uses, infrastructure projects as well as recreation. For example, a park needs to be located within a half mile of any residential area. “We want to provide that amenity to residents,” says Tinklenberg. “We’re also building trail networks along our creek corridors to link into the South Platte River Trail. That trail then links into even more trails throughout the area. It’s an important component to building a quality community.”

In 2013, city residents voted to pass a dedicated penny tax, which helped fund capital improvement projects like the Paradice Island Pool at Pioneer Park as well as the Bison Ridge Recreation Center, which opened in 2018. Other recreational hotspots include the Buffalo Run Golf Course and Dick’s Sporting Goods Park (DSG Park). The stadium is located on land that was once part of the Rocky Mountain Arsenal, a U.S. Army weapons manufacturing facility. When that closed, the city acquired over 900 acres of the land. Kroenke Sports & Entertainment built DSG Park on a portion of the land, which is where the Colorado Rapids, Denver’s major league soccer team, plays its home games.

Also located on the former Rocky Mountain Arsenal lands is the Rocky Mountain Arsenal National Wildlife Refuge. The United States Congress designated the 15,988-acre sanctuary, a national wildlife refuge in 1992 and it is now the largest urban refuge of its kind in the country with more than 300 species of wildlife. Managed by the United States Fish and Wildlife Service, the site is in the middle of the community. “It’s a major amenity with lots of visitors. It’s the only place where you can drive in the metropolitan Denver area and find bison, bald eagles, and red-tailed hawks; the same variety of wildlife out on the prairie,” explains Tinklenberg.

He hopes that in three to five years, some of the 300-acres surrounding the DSG Park is “kick started into development” with the help of Kroenke Sports & Entertainment. He admits that right now it is unclear exactly what that will look like, but the planning process and market analysis, have already begun.

Claymore discussed opportunities to attract world-class companies to the open land around the Denver International Airport. She noted, “We have a partnership with DEN, Adams County, Denver, Brighton, Aurora and other surrounding communities, to market this area we are calling the Colorado Aerotropolis internationally. It’s a great chance for our city to embrace the industries we already have, while diversifying by attracting headquarter and technology-based companies. It’s an exciting time for us because there’s lots of opportunities.”

What: A rapidly growing community; population 62,400

Suncor Energy (U.S.A.) Inc. owns and operates the Commerce City Refinery. The refinery is comprised of three plants from two refineries, which Suncor acquired in 2003 and 2005. It is the only facility of its kind in Colorado and the largest in the Rocky Mountain Region, processing approximately 98,000 barrels of crude oil per day which in turn provides quality fuel and petroleum products for Coloradans.

Suncor’s Colorado operations, products, workforce, and community initiatives are local. We purchase crude from the Denver-Julesburg Basin, process it in Commerce City, and sell nearly 95% of our products – including gasoline, diesel and paving asphalt for roads – within Colorado. The refinery is also a key supplier to the Denver International Airport, providing about a third of its jet fuel.

Guided by its purpose to provide trusted energy that enhances people’s lives, while caring for each other and the earth, Suncor takes its role as a good neighbor seriously. Suncor has always been an active member of the community, which is reflected in the many local investments that connect our business to community strengths to make a positive difference in society.