The city now known as Belton, Mo., sprang from an 80-acre land purchase made by George W. Scott and William H. Colbern from one Manzey Q. Ashby in 1869. It was incorporated in 1872 and named for one of Scott’s closest friends – Marcus Lindsey Belt – with whom he had served in the Civil War.
Many of its initial settlers moved west from Kentucky, and, most recently, its population ticked upward by 6.3 percent between the 2000 and 2010 federal census counts – growing from 21,730 to 23,116 persons.

According to Jeff Fisher, the city’s Public Works Director, the people living in Belton now still maintain a tangible level of reverence for its history.

“It is a caring community that is very engaged in charity and celebration of its military history and special moments in history,” he said. “There is a former Air Force base very close that still has a few remnants of active military units. But community perception of the city is not unlike it is in other areas, I think. There are some that are very supportive and some that are fairly skeptical. However, the expectations for local government are reasonable and probably realistic, really. The identity depends on who you speak with but certainly not clear or cohesive, and, in fact, there are very initial efforts to rebrand and create a new identity.”

Fisher oversees a department of 42 full-time employees and an annual operating budget of $151 million, in addition to the management of between $25 million and $30 million in capital.

Public Works is responsible for ensuring safe and reliable drinking water, efficient and smooth travel throughout the city, environmentally responsible treatment of waste, effective storm water management, and sound stewardship of public funds. The department is made up of three divisions: Transportation Services, Water Services and Engineering/GIS.

Transportation Services is responsible for the repair and maintenance of the city’s street and storm water collection infrastructure. Water Services operates and maintains the city’s water reservoirs, pump stations and water mains to deliver the highest quality drinkable water to its customers. It also operates and maintains the wastewater collection and treatment system. Engineering/GIS handles all the construction-related activities within the public right-of-way, while employing the most effective project management practices possible, in order to protect the public safety.

“Staff has worked very diligently over the last five years to build confidence and trust with the community and the council,” Fisher said. “We are strong in the area of wastewater but have real challenges in water, storm and streets. Replacement of water mains is a new focus but currently not at a level that will address the needs before serious maintenance issues will begin to take place. And there has been additional discussion, recently, about the need to increase the level of funding.

“The arterial streets are at an acceptable level and collectors are generally at an acceptable level, but have some weaknesses. The biggest challenge is in the residential class, where we have a significant number of poor and failed streets. There are just not enough revenues to keep up with the system and we focused a lot of effort on maximizing what we have. There are no dedicated revenue streams to the storm system and so it is a serious challenge. Overall, I would give us a D+ to C- in the area of maintenance levels.”

Both the water and wastewater projects were financed through low-interest, state revolving-fund loans.

Belton finished up a $6 million arterial road project in the commercial center of the city that was funded by the transportation development districts, and $3 million worth of work on another segment of the same artery that was funded by a separate transportation development district. Currently in the design stage is a $6 million road improvement project adjacent to a major city interchange that will be completed in 2017, thanks, in part, to some federal funding.

A small waterline replacement program will cost $400,000 per year, Fisher said, and also underway are a $2 million sanitary sewer interceptor lining project, and a $2 million per year project on infiltration and inflow, in addition to other sanitary sewer projects.

“We have been very deliberate about identifying great partners and outsourcing what we cannot do well as much as makes sense,” he said. “We have created and used cooperative contracts for all kinds of activities including street maintenance. We are using various design-build methods and have had excellent success. One thing that we started about four years ago that is close to my heart is the addition of a Quality Assurance Plan that is required of the contractor for project bids where there are not federal or state dollars involved. This has proven to be successful. We have multiple partners on call, so we can be nimble and meet demands quicker. We do performance appraisals for each partner after each project and each anniversary year.”

Going forward, developing an internal mindset will play an important role, too.

“A few of the key things that we spend time on are right culture, right attitude and disciplined action,” Fisher said. “So, I see a team of public servants that have no other obligation than to meet the needs of the community and play an important role in a higher quality of life. I see smart decisions and quality outcomes. I see a greater focus on streets, storm and water. Belton has some work to do but it has great potential to be an the economic center for northern Cass County and a southern gateway to Kansas City.”

WHO: City of Belton
WHAT: A city in Cass County that was incorporated in 1872 and was home to 23,116 residents at the time of the 2010 census
WHERE: West-central Missouri, on the state’s border with Kansas; 22 miles south of Kansas City
WEBSITE: www.belton.org 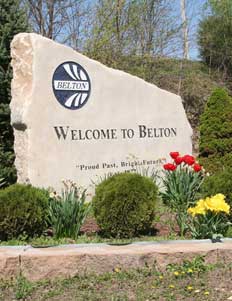