The City of Ontario, California elevates the quality of life with urban lifestyle districts that create sustainable places to live, work, and play. Located in the western part of the Inland Empire metro area, just 35 miles east of downtown Los Angeles, Ontario is one of the 150 largest cities in the United States and is home to over 11,000 businesses and 119,000 jobs. With major freeways, rail transportation, and the Ontario International Airport, this culturally diverse, best-for-business community is well positioned for quality development and economic sustainability.

The city takes its name from the visionary Ontario Model Colony development established in 1882 by Canadian engineer, George Chaffey, and his brothers William and Charles. They named the settlement after their home province of Ontario. Today, Ontario offers premium entertainment venues, such as the Ontario Convention Center, Toyota Arena, and the Ontario Mills Mall, and prime employers, including QVC, UPS, Amazon, FedEx, Niagara Bottling, and Toyota. The city is committed to investing in the growth of the area’s economy while providing a balance of jobs, housing, and educational and recreational opportunities for its residents in a safe, well-maintained community.

Business View Magazine recently spoke with City of Ontario Executive Director of Economic Development, John Andrews, and Business Operations Director of Economic Development, Bradley Gates, about the city’s growth strategy, as Ontario is slated to double its already significant population in the next decade. The following is an edited transcript of that conversation. 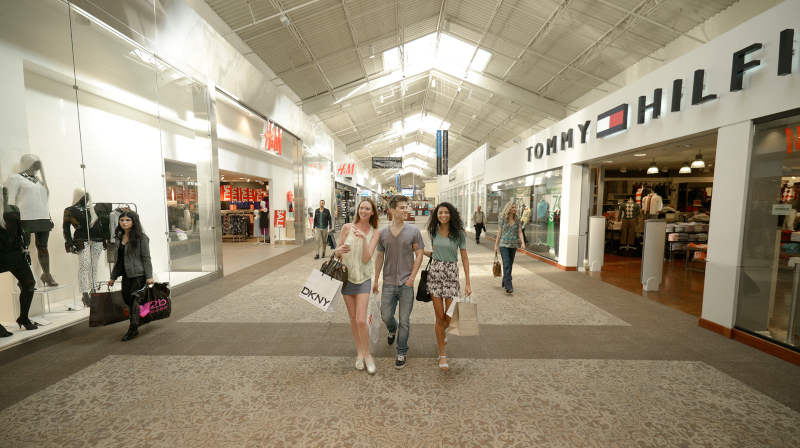 BVM: Can you give us an overview of your city from an economic development perspective?

Andrews: “We have a lot of connections to our history here; from the initial city plan of the downtown, the grid of streets, and the Euclid Avenue divided median thoroughfare, which is unique for southern California. We’re about 35 miles east of downtown Los Angeles and 40 miles from the ports of Los Angeles and Long Beach. That distance, coupled with the fact that we are at the intersection of some major state and interstate highways, gives Ontario very good locational advantages. On top of that, we have an international airport here.

“Ontario has emerged, along with the west Inland Empire, as a hub for businesses that are focused on supply chain and goods movement, so that’s put us on the map in that regard. Several Fortune 500 companies have major investments here – distribution centers that are half a million square feet and up, with hundreds of employees. That’s the bread and butter of our local economy. We work closely with those businesses on a day-to-day basis to facilitate their success.”

BVM: Is there space available for more of those large facilities?

Andrews: “Not really. That’s one of the challenges we face, looking forward. We’ve got about 110 million square feet of industrial or logistic space under roof that’s occupied under historically low vacancy rates of less than four percent. The demand for space is high and the availability is low. We do have some projects that will add up to an additional 20 million square feet in the southwestern portion of our city. Once that is developed, our areas that are set aside for major logistics and supply chain space will be pretty well used up. But that’s a fair amount of additional supply coming online, so we’re optimistic and excited about that. The timeline for those projects is five to eight years, and there is already an initial phase under construction. Our current population is around 177,000. In the next 10 years, the population is expected to more than double because we have large acreage in the south part of the city for residential growth. And we expect to build out 40,000 new homes over the next 10 to 20 years. That will definitely push us up to one of the largest cities in not only California but the whole country.”

BVM: What is your planning strategy for all this growth?

Andrews: “About a decade ago, we adopted what we call ‘The Ontario Plan.’ There have been some amendments in the ensuing years, but it’s a combination of a land-use, general plan and a business operations plan for the city; melding together the traditional land-use goals with an operations plan that brings in elements of finance and economic development that our agency was responsible for. That document is about ten years old now and it has worked well for the city. When investors or new homeowners come in, and want to know what the city’s vision is, that’s the document we refer to.

“Our council is pretty creative and aggressive when it comes to trying to attract and retain business in the city. One of the tools we’ve used on a very selective, but strategic, basis is location and retention agreements. In a nutshell, we use either the anticipated revenue from a new development coming in, or in the case of an existing business that is generating revenue to the city, we will use a revenue participation structure to retain and, hopefully, facilitate the expansion of a business in the city.

“These are instances in many cases where the businesses are considering facilities out of the state. Our city council has been very strategic in their direction to us, as staff, to work very closely with businesses to ensure we are using every means necessary to either attract or retain them. Because, for Ontario, what many of those revenues work their way into on the expense side are what we use for public safety, parks, libraries, and the essential services of a growing population.” 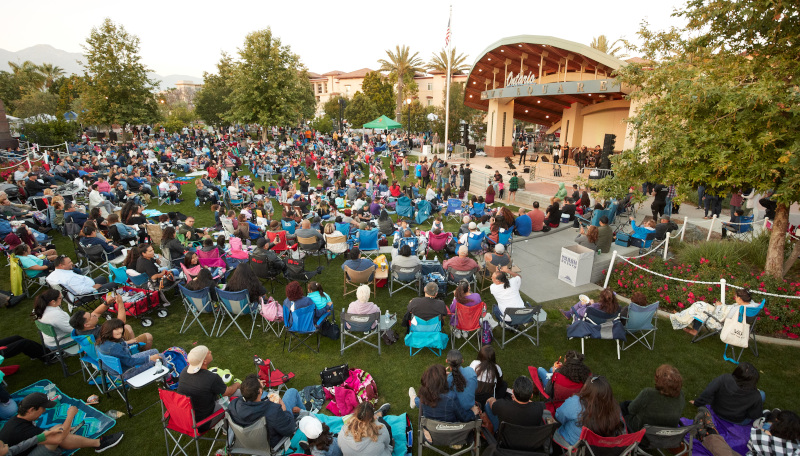 Concerts in the Park at Ontario Town Square

BVM: What draws people to Ontario?

Gates: “We are the location of the Ontario Mills Outlet Mall that has 24 million visitors a year. It’s one of the top tourist and shopping destinations in California and a great source of revenue for the city. We also have the recently renamed Toyota Arena (formerly Citizens Bank Arena) – a great, multi-purpose venue for concerts and big sporting events. We worked really hard with Toyota to secure that 10-year deal for naming rights. They have a huge distribution center here in the city, so it really cements our relationship with them, as one of Ontario’s top employers.”

Andrews: “Another significant destination for visitors is our historic downtown/Euclid Avenue district; home to Ontario Town Square – an open air amphitheater that hosts concerts and special events throughout the year and draws thousands of visitors. We also host the annual Route 66 Cruisin’ Reunion, which brings thousands of classic cars and tens of thousands of car enthusiasts to the downtown area every September.

“We’re also in the process of creating new mixed-use developments in the downtown that would incorporate ground floor retail space with multiple stories of multi-family housing above. As for adaptive re-use of buildings, we’ve partnered with Brand Pacific Development of Glendale, California who are creating a restaurant and distillery in our historic Bank of Italy building, right next to Town Square overlooking the concert venue.

“And we’ve partnered with Fourth Sector Innovations to establish a business incubator, accelerator, and co-working space in our downtown. They will operate the space which will help entrepreneurs and start-up businesses in the logistics technology sector. We see that as a great way to help create new businesses and jobs in the city, in addition to new technologies that can be utilized by our thriving logistics sector.”

Gates: “Also downtown, we’re partnering with our local Chaffey College, one of the top community college systems in the country, for the establishment of a downtown campus. It would take up a whole city block and, potentially, bring thousands of students and faculty there, every day.”

BVM: Are there significant infrastructure projects in the works?

Andrews: “With goods movement being so important to our economy, council always wants to ensure our roads are set up to accommodate a vast amount of trucks from a maintenance and construction perspective. Also, the folks in our public works department pay very close attention to the quality of streets in our neighborhoods to make sure they are safe and well maintained. Plus, they continually monitor all elements of our city infrastructure.”

Gates: “We have a big fiber project going on, right now. We’ve installed 35 miles of conduit in the city and we’re in the process of installing another 35 miles. And this is just getting started. The goal is to have every residence and business connected to what we call Ontario Net (one Gb per-second internet). We’ve partnered with Inyo Networks for this; we’re installing the conduit and they’re providing the internet service at very affordable rates for our residents and businesses.”

Andrews: “Ontario is one of the older incorporated cities in southern California, so we have established neighborhoods in parts of the city, but we also have an area of about 13 square miles that was annexed about 20 years ago. It has been master planned as part of the city, and now we’re starting to see the fruits of that planning put into place, in terms of new residential neighborhoods going in, new people buying homes, and new businesses being established. That’s pretty exciting for the future of Ontario because we’re on the cusp of a remarkable period of growth for the whole community.”

REDA has experience in all facets of commercial real estate, with capabilities to provide a range of services for it clients, including: Pre-Development and Entitlement, Corporate Build-to-Suit, Capital Placement, Asset Management, Acquisition / Disposition Analysis, Distressed Property Workouts, Construction and Development Services, and Property / Portfolio Management.

The company’s Founders and Principals are Jason Krotts and Bill Goltermann. REDA’s partners have been responsible for in excess of 15 million square feet of entitlement, development, leasing, and sales of buildings over the past 30-plus years, with a valuation in excess of $3 billion.

Over the years, the company has completed numerous development transactions in various communities throughout Southern California and, according to Krotts, “not one compares to the City of Ontario.” Regionally, Ontario is a vital player in the overall Inland Empire region of Southern California, which serves as a catalyst for goods movement and logistics for much of California and the western U.S.

“The City of Ontario, working with the development community in a partnership, has created one of the largest, most active logistics hubs, globally,” Krotts continues. “It would never have been possible without the desire by Council to create a strong live, work, play environment. Council and staff are continually seeking new avenues to try and blend these three components while also challenging the development community to do better. From Council to staff, everything runs smoothly, and it is major reason we continue to deepen our relationship with the City through our various developments.”