With 237 franchises in five countries, Fibrenew is going far in the mobile, leather, plastic, and vinyl repair industry. Even through economic downturns, the company has continued to enjoy success over the years. Now, it has its sights fixed on more than doubling in size within five years.

“We’ve grown every single year since we started franchising in ’87,” says Jesse
Johnstone, Vice President of Technology and Marketing for Fibrenew. “Today,” he adds, “we’ve got more than twice the market share as our closest competitor, in terms of the number of franchises and technicians in the field.”

But it’s about much more than that.

“What really sets us apart, aside from the numbers, is the quality of our products. We
manufacture all of our own products in-house. They’re under constant refinement to be
the best they can possibly be,” Johnstone says. “That and our color-matching
technology,” which technicians use on their iPads. “The accuracy of that with our
proprietary products and techniques is really what sets us apart from the competition.”

Established in Toronto in 1985, the company started franchising in 1987. In 1994,
Fibrenew began a push to franchise throughout Canada. Fibrenew started manufacturing its own products in 1995. The following year, the company set up shop in New Zealand, and three years later, in the United States. Currently, the company, based in Alberta, Canada, does business in Canada, the United States, Mexico, New Zealand and Australia. Altogether, its network of franchisees completes roughly 1,265 repair and restoration jobs daily – 303,600-plus, yearly. 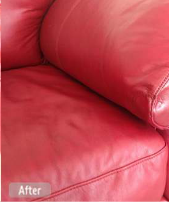 Since 1987, Fibrenew has worked with some of the biggest brands in the automotive,
aviation, medical, furniture, retail, insurance, disaster recovery, and warranty industries – including Sears, Kohl’s, Ashley Furniture Home Stores, major rental car agencies, and the big car manufacturers. It also services customers in their homes and businesses.

Fibrenew can refurbish everything from dashboards, to leather couches, to vinyl siding, for a fraction of the cost of replacing those items. In addition, the company prevents tons of plastics and leather from being sent to landfills. With leather, plastic and vinyl about everywhere you go – from dentist offices, to salons, to rental cars, to veterinarian offices – the business possibilities are endless … and growing.

“Last year we added 50 new franchises, and we’re on pace to do the same this year. At
that rate, five years from now, we’ll be over 500 units,” says Johnstone. “With that, of
course, comes the expansion of our support systems and backbone and larger
warehousing to manage that growth.”

In terms of services, Fibrenew recently has woven into its business fabric a light
upholstery service. “What that means is we’re able to offer seam repairs, button
replacements, fixing foam on cushions, on furniture and in vehicles … anything that can
be done upholstery-wise on-site – that’s the only criteria. … Our emphasis is still being
able to do it on-site.”

Lately, the company also has expanded into the medical market. “That’s really because of a new product we’ve developed that caters specifically to the vinyl coverings on
examination tables and dentist chairs. We’re now able to go in and refurbish that
material.”

Though more than half the company’s locations – 155 currently – are in the United
States, Fibrenew sees much untapped potential there. “In the U.S., we’re only at about 20 percent of our potential,” says Johnstone. “That means we’ve got a lot of open territory out there still. There’s still potential in every major city across the country.”

For those interested in jumping on the franchise-owning bandwagon – and many will, as
the company’s mobile units are all franchises – a key trait to possess is drive.
“Self-starters, I think, is the biggest one – you’ve got to have the ability to go out and sell
yourself and your services, and how you can help other people. Primarily, it’s the people
who are willing to get out there and work,” Johnstone says. “We can teach the skill, in
terms of the actual trade skill, matching color and their actual process for doing the repair itself. But it’s having that internal fire to get out there and really grow a business. Those are the guys who always do the best.”

Among the few requirements for potential franchisees, which are all home-based, are:
they cannot be color-blind; they must like to work with their hands; and they must be able to move furniture. “And the other one that’s coming into play more and more is the
ability to be trainable; the ability to follow a program that we have in place,” Johnstone
says. “Having your own ideas is good, but we know what works and what doesn’t in this
industry. And those who stick to the framework we have in place are usually the guys
who do the best.”

When considering a franchise territory,

Fibrenew looks for a mix of business and
residential potential, as well as a population base of at least 350,000. “For instance, we just had somebody interested in a territory in Quebec, Canada, which was very much what we call cottage country, and it’s almost strictly vacation homes. And we had to take the position that even though the population base was there, there isn’t that
mix of business and anything outside of residential, so we’re not going to award a
territory in that area.”

Those who are awarded a franchise enjoy low business overhead, few or no employees to manage, and a flexible work schedule, among other things – including a constant need for their services. With that need and the company’s expansion plans, Fibrenew is sure to continue leaving its mark on the industry.