In 1846, according to local legend, federal surveyors named the beautiful Lake Dora for Ms. Dora Ann Drawdy, a homesteader who befriended them with her warm hospitality. Years later, in 1883, the small but growing town was named after the lake. Research has shown that the first survey maps were published in 1848 with the name “Lake Dora.” However, Ms. Drawdy’s family was shown elsewhere on the census around that time, so there’s a bit of a mystery as to the true identity of the namesake Dora. But there is no disputing that, three years later, the town’s name was officially changed to Mount Dora to reflect that the settlement rests upon a plateau 184 feet above sea level – an unusual feature in central Florida.

By the early 1920s, residential growth and business development were booming, and Mount Dora was on its way to becoming a city. Investments were made in public infrastructure; streetlights, a water system, curbs, and paved roads were installed. The town’s first two public parks were created along Lake Dora’s shore. Today, the City of Mount Dora is home to just over 14,000 residents. It retains the flavor of a small town with a bevy of historic buildings and large canopy oak trees, and is popular for antique and specialty shops, and special events that draw thousands of visitors throughout the year. Most notable: the Annual Christmas Lighting Festival, Bicycle Festival, Antique Spring Show, Crafts Fair, Mount Dora Arts Festival, and the Sailing Regatta. 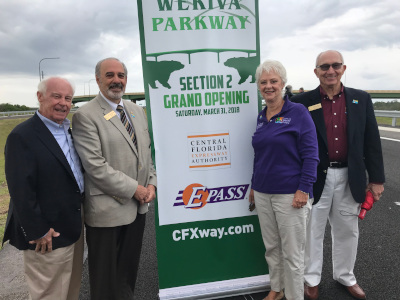 For the last several years, the city has worked with Lake County to establish an area east of town within the city’s Joint Planning Area for the establishment of an employment based economic development district. This area is ideally located to take advantage of the imminent construction of the Wekiva Parkway and improved transportation system along State Road 46. To date, the city and Lake County have jointly developed and adopted consistent land use designations to allow for higher intensity office and light industrial and support retail uses.

BVM: Mount Dora has significant plans for 1300 acres of land. Can you update us on that initiative?

Hayes: “We are very fortunate in Mount Dora to have a Joint Planning Agreement (JPA) with Lake County that takes into account 1,300 acres to the east of our city. Referred to as the Wolf Branch Innovation District, it’s basically an undeveloped area with just a few homesteads and a couple of small businesses. In 2010, we prepared an Envisioning Plan for the area, that’s since been revised to accommodate infrastructure – installation of water and sewer systems, and conduit for future fiber, running along State Rd. 46 from Mount Dora to the Seminole County-Sanford area. Part of the new 429 roadway has also been the interconnect into Mount Dora, which is the 453. So, we’ll see the growth and impact from having two major highways, not going through, but connected to our city.

“The fiber is city-owned and we’re able to pipe it through the Innovation District hoping to encourage health and life science companies to move in. We performed a study through Duke Energy and McCallum Sweeney Consulting. They looked at the area and felt 300 of the 1,300 acres we had slated for commercial development are better suited for health sciences, i.e. IT-type functions and medical and educational services, which we’re considering. We have a tentative agreement with a college on 20 acres that a property owner donated; the college is now seeking funding for the build. Within the 1,300 acres, we also hope to build housing that will allow folks that live and work in Lake County to stay in the county and not have to cross county boundaries. Right now, we are a transitional area into Seminole and Orange Counties, so we’re hoping to bring more families into Mount Dora to sustain our future.”

BVM: Are you annexing that acreage into the city? 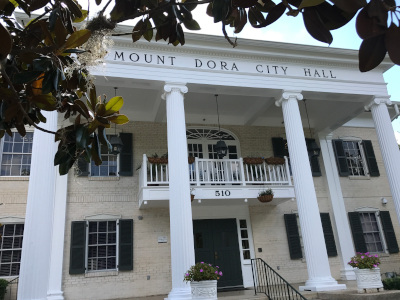 Hayes: “Yes, we are annexing that area now. Because of the JPA, the county has acknowledged that the property will be part of the city. We’ll have the infrastructure services to that area, and we’re accepting voluntary applications at no cost to land owners to annex. That 1,300 acres, in the near future, will be annexed into the city, and we’ll have those basic services (water services, police, fire, and fiber) afforded to them.

“As part of the process, we have strategic partnerships with developers, as well as engineering firms, government partners, consultants, and several great public-private partnerships. The city has hired an Economic Development Manager to carry out the objectives set out by our Lake County Commissioners and City Council. Last year, we jointly hired an economic development consultant to implement division of the two, so we can see the Wolf Branch Innovation District area developed in the way we all feel it should be for the future.”

BVM: How do tourism and recreation factor into your city’s economic growth?

Hayes: “We expect to increase tourism in the city as part of our Economic Development growth plans. Mount Dora is proud to have 30-plus events throughout the year, including festivals and cornerstone events. There are three to four weekends, annually, where the city hosts close to 250,000 people in a single day. We are a critical contributor to Lake County’s tourism dollars – we drive the beds and restaurants on those weekends to full capacity. The great thing is they return to visit Mount Dora and our boutiques and eateries. Our strong tourist season continues to be October 1st to the end of April.

“We’ve worked tirelessly to make sure or parks and rec system attracts families, as well as the adult community. This includes pickle ball courts, lawn bowling, boating on Lake Dora, and other activities for all ages. We’re also expanding our trail system, in terms of mobility, infrastructure, and greenspace, connecting it to other parks and recreation facilities, and the Wekiva, West Orange, and Seminole Trails. We’ve partnered on the trail expansion with Lake County and other cities in the area, so we’re looking forward to seeing the trails as a major function in our downtown and all through the Innovation District. Any developers that present packages in that District have to include connectivity to the trail system.”

McDonald: “We have four parks within walking distance to each other. Gilbert Park has a large, new playground; Palm Island features walking paths along the water; Grantham Park has the only freshwater lighthouse in Florida; and picturesque Elizabeth Evans Park has a lot of festivals. We’re also known for spectacular sunsets – people come to Mount Dora to have their picture taken at sunset at the lighthouse.”

BVM: What role does your downtown core play? 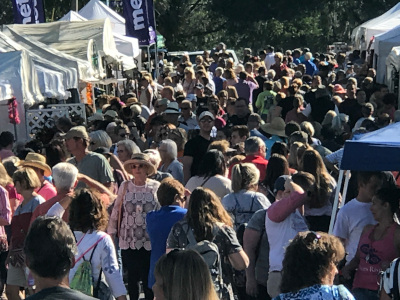 Hayes: “We refer to Mount Dora as an eccentric, innovative community. We want to carry the charm and vibrancy out to our new development area, but also keep in mind that the downtown is the downtown and keeping it clean and sustaining the credibility of life in that area is very important. We have close to 30 restaurants in a four-block area, so we have challenges with garbage collection and recycling. We’ve worked with our carriers, Waste Management, to provide downtown businesses with some automated recycling bins and garbage containers that compact. With daily pickup, we’re able to collect around four times the amount we did originally. So restaurants can place their boxes and plastics out for pickup and truly feel good as part of a recycling program – something we didn’t have available before for our commercial community.

“On the planning front, fiber is very important, and we’re looking into how we can sustain smart city connectivity in our historic downtown. Our demographics state Mount Dora’s median age of residents is about 50 years of age. It used to be in the 60s, so it’s changing. Families enjoy the quaintness of being able to walk to the downtown, and we’d ideally like to have a median age around 40. We do have an active senior community, as well, with Waterman Village expanding from 100 to 200 homes for retirees. They keep the downtown businesses very busy during the day, and tourists and younger people come out in the evenings and on weekends. It’s a nice balanced blend.”

BVM: All in all, how would you describe Mount Dora to outsiders?

Hayes: “We’re a truly quaint, charming community looking to grow and expand into the future. We value our residents and our tourists – they play an integral part in our festivals and events and how our city is maintained.”

McDonald: “Mount Dora is definitely a community and a city worth visiting!”

Check out this handpicked feature on Marion, Iowa – Projects abound. 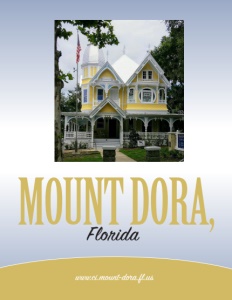