All railroads in America began as short lines. From the first commercial railroad, the Granite Railway, built in 1826, to haul granite blocks from Quincy, Massachusetts to the Neponset River for trans-shipment to Boston, these independent, short line operations were financed and built by 19th century, entrepreneurial risk takers, within the communities they served, in order to move freight and people in local commerce.

As the nation grew, and by the time the century had ended, more and more short lines were consolidated into regional systems that served ever widening areas of the country. These large railroads were owned by a coterie of wealthy industrialists (sometimes known as barons), and their shareholders. Those independent railway lines that either were not subsumed into these systems, or over time, became marginal and unprofitable branches for the major lines that did own them, became the core of today’s short line railroad industry.

The American Short Line and Regional Railroad Association (ASLRRA) has been the voice of the short line industry since 1913, when 22 short line railroad managers met in Atlanta, GA, to form the Short Line Railroad Association (SLRA) of the Southeast. The new organization’s central purpose was to deal with legislative matters, primarily on the federal level. Annual dues were five dollars. By 1915, its membership had increased to 75. 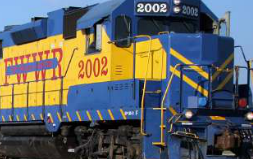 Between 1917 and 1921, more short line organizations merged together to increase the ranks of the newly formed American Short Line Railroad Association (ASLRA). In 1997, the ASLRA merged with the Regional Railroads of America to form the American Short Line and Regional Railroad Association (ASLRRA). Today, the ASLRRA continues its mandate of representing the interests of the American short line industry, and railroads, in general. Its current membership is 550 rail lines and 500 suppliers and contractors.

Short line railroads are thriving today and are an important part, both of the railroad industry and the national economy. Short lines connect the rural communities of America and provide a viable and affordable means of transportation for goods and people, not served by the larger railroads. They operate and maintain 30 percent of the country’s railroad mileage – approximately 50,000 miles – and account for nine percent of its freight revenue and 12 percent of all railroad employment.

But for decades throughout the 20th century, the survival of short line railroads was far from assured. Hard times began in the 1920s. Trucking competition was increasing, and the legislative agenda in Washington was tilting toward the newer way of delivering goods and services, imposing burdensome regulations on railroads, while subsidizing the trucking industry with government built highways. At the beginning of the Great Depression, 50 percent of all short lines reported net losses. By its end, that number had increased to 65 percent.

The downward trend continued into the 1970s, largely because of the country’s new Interstate Highway System, which further eroded rail traffic in favor of trucks and automobiles. In addition, punitive taxation policies and burdensome federal regulations helped drive many independent lines into bankruptcy. As the situation worsened, ASLRRA membership continued to decline, even as the organization persevered in its advocacy role, trying to get Congress to ameliorate what was clearly seen by many as the last dying throes of a once profitable and vibrant American industry.

Finally, in 1976 Congress passed the Railroad

Revitalization and Regulatory Reform (4R) Act and, in 1980, the Staggers Act, two pieces of legislation that ended most of the economic regulation on the rail industry and gave the larger railroads a viable exit strategy for divesting themselves of their unprofitable lines.

All at once, the major railroads began to market these lines to short line operators and independent entrepreneurs, and America’s small railroad industry was, in essence, reborn, returning to its early 19th century roots of serving local customers with efficient and cost-effective transportation. Between 1980 and 2014, America’s freight railroads invested $575 billion on capital expenditures and maintenance expenses related to locomotives, freight cars, tracks, bridges, tunnels, and other infrastructure and equipment.

Having just celebrated its 100th Anniversary, the ASLRRA continues to further the industry’s legislative priorities in the nation’s capital, as well as providing networking possibilities for its members via events and conventions throughout the year. Its committees are designed to advance issues such as technology, legislative policy, mechanical issues, passenger rail, etc. It communicates with its members via its website, e-newsletters and bulletins, and bi-monthly articles to Railway Age magazine.

Once again vibrant and viable, the American short line industry serves the needs of its last mile/first mile customers by connecting them to the larger rail lines; providing their transportation needs when the larger railroads can’t or won’t; and, generally, saving all of its customers, large and small, money, compared to the costs of truck transportation. And, according to Jim Howarth, Vice President for Business Development for the New York, Susquehanna & Western Railway, “Small customers and not small customers to small railroads.”

For the next hundred years, the ASLRRA will continue to champion the sustainability and growth of what The Economist magazine has noted about the American freight rail system: “[It’s] one of the unsung transport successes of the past 30 years. . .universally recognized in the industry as the best in the world.”

No doubt, the ASLRRA would agree.

WHO: The American Short Line and Regional Railroad Association
WHAT: Railroad association operating in north eastern US
WHERE: Albany, New York
WEBSITE: www.amshortline.com