January 2015Past IssuesSupply Chain and Logistics

Birmingham, Ala.’s Church Transportation & Logistics is an asset-based whose primary bottom-line mission is to get client shipments from point A to point B in a safe and timely manner. Its current menu of services includes full truckload, multi-stop truckload, dedicated transportation, cross-dock/warehousing, expedited, logistics management and consulting.

But while the company’s present-day operation boasts 70 tractors, 125 trailers, a new corporate office and a 30,000-square-foot warehousing/cross-dock facility, its founder and namesake – Fenn Church – doesn’t have to strain to recall times when evidence of success was a little harder to come by.
“There were plenty of dark days,” he said, “but come hell or high water we were going to get through them. I just had the mindset of ‘Never Give Up.’”

In fact, Church’s business tale traces back to the years he spent on the less-than truckload side of the industry, and the initial (and ultimately unsuccessful) search he made at that point for companies available for purchase. When no suitable operation was found, he began his own endeavor by buying a truck and employing a single driver. And once he was in, the forever forward mindset took over.

The one-truck/one-driver operation became two trucks and then four trucks and then eight trucks within the first couple years, though Church still supplemented the new endeavor with a part-time night job as a driver with a handicapped bus service in Birmingham. Once the day job got to a point where a full-time dispatcher was needed, though, he’d reached a milestone of success.

“I stepped out and just concentrated on trucking,” he said.

“We just grew it. We had to go out and find more customers. When you get so far invested in it, you can’t turn backward. You’ve just got to keep pushing forward. What wasn’t profitable, we found a way to make it profitable or we quit doing it. I put every bit of my personal savings into this thing. I just couldn’t back up. Failure was not an option.”

The choppy early years ultimately yielded a sustainable operation that now supports a workforce of nearly 90 employees – including 10 new hires in 2014. The business had amassed 50 trucks by the end of 2012, then boosted the asset collection to 74 trucks last year with the formation of a dump-truck operation through a partnership with Mid-South Paving, in which three drivers were also brought on.

The company’s core function is still dry-van operation and its service reach extends across the United States, though Gene Sweeney, Church’s vice president of operations since 2005, said an effort has been made in the last 18 months to close territorial focus to the eastern half of the country.

The customer base remains dotted with Birmingham-area clients who, in Church’s words, “know who we are and they don’t mind paying a little more, but they expect a higher level of service.” Meanwhile, merchandise like furniture, soft drinks, building products and appliances – freight that other carriers consider difficult, and often decide not to handle at all – has become a Church go-to. 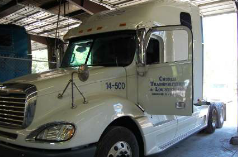 investment in technology – independent satellite tracking on every truck and trailer, and electronic on-board recording devices in every truck – has made it both more attractive to customers with sensitive shipments, and less under the thumb of the federal and state regulators who are cracking down more heavily on companies in violation of drive-time rules.
Sweeney said this April will mark four consecutive years in which the company has maintained 100 percent compliance with the various requirements for onboard electronic logs.

“We’re able to walk into our customers with confidence and tell them, ‘We are a safe organization,’” he said. “We also walk in and explain to them, ‘Hey, don’t ask us to do 1,000 miles between 5 in the evening and 9 tomorrow morning. It’s not possible legally and we just make sure they understand our role. What does that give them? It gives them the confidence that they can go to bed tonight and know that my driver is not going to be overtired. He’s not going to drive into a busload of nuns carrying orphans. He’s going to get that product there safely and on time and we give them a realistic ETA. That’s huge in this litigious society. Liability is not just housed with the trucking company now.”

The straightforward method used to spell out a safety mindset with clients also carries over to Church’s forecasts for the future, where aspirations are set high – then approached with good sense.

Getting the operation to 200 trucks by the end of the decade is among the primary corporate objectives, Church said, as is watching the monthly sales revenue continually climb from the $1 million to $1.5 million range, to the $2 million to $2.5 million levels.

Further diversification into other transportation business units is also on the table, he said.

“That will not be possible if we can’t manage it at the same level that we’re managing right now,” Church said. “We’re not going to just go and add trucks if we can’t keep the control. Keeping the same personality of the company as we grow is a tremendous goal. You don’t want to get away from what brought you to the dance, so to speak. We’re trying to maintain a steady course.

“We kick ideas around all the time when we all talk. At the end of the game, just knowing we’ve had a successful company is what we’re after.” 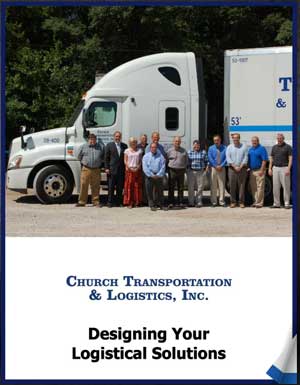