The Oregon Convention Center – Still the showcase of the Rose City 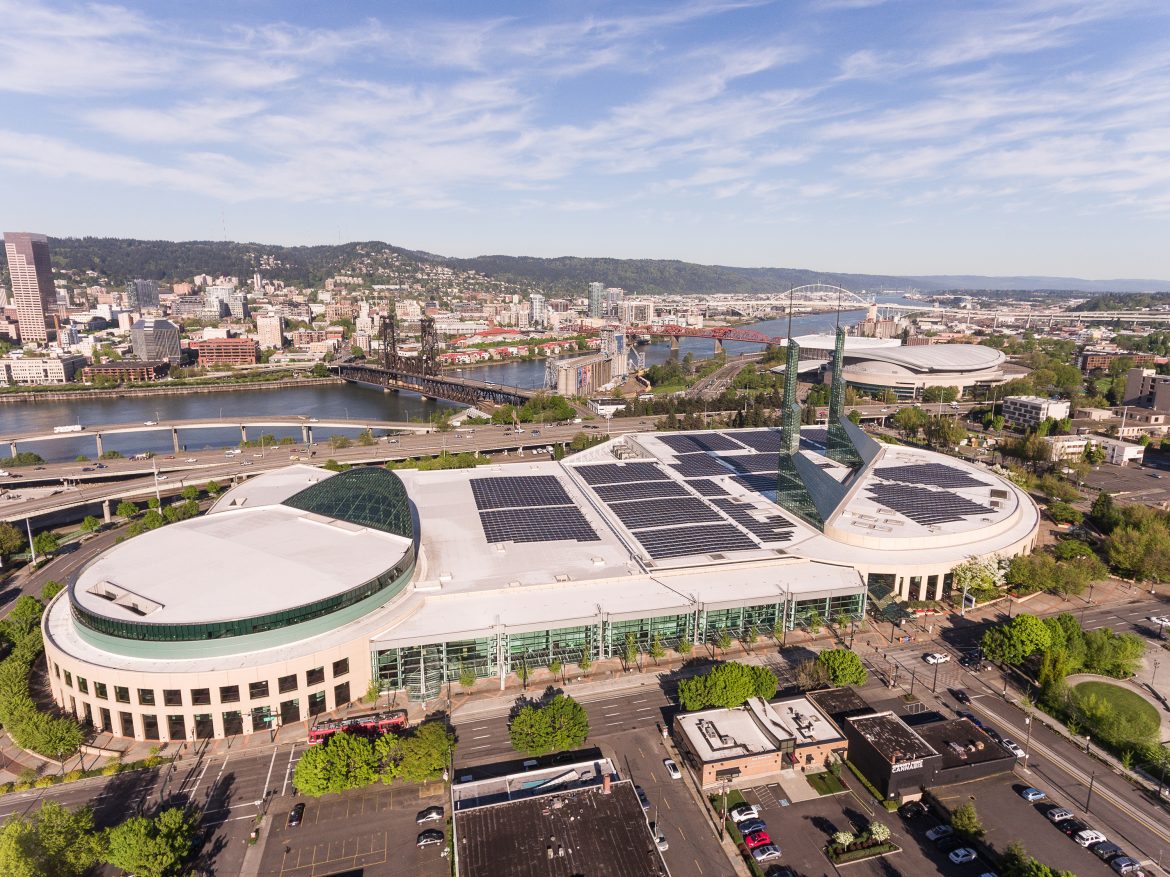 The OCC’s complex covers 18 square blocks. The building, itself, is LEED Platinum certified; one of only two similar convention facilities in the U.S. The Center’s building and grounds also display a two-million dollar collection of public art, with works from over two dozen, mainly Pacific Northwest, artists. There are paintings, plaques, glass and ceramic tiles, sconces, mosaics, bells, etc. Each of the Center’s signature glass, twin towers has a focal point work: a forty-foot long Chinese dragon boat is suspended in the east tower, and the Principia, the world’s largest Foucault pendulum, swings and rotates across a 40-foot halo of suspended, gilded rays, in the north tower.

The OCC is owned by Metro, the Portland area’s regional government. It is managed by the Metropolitan Exposition Recreation Commission, and supported by a variety of local funding, including a portion of the city’s transient lodging tax. In the 2015-2016 fiscal year, the Center generated about $700 million worth of economic impact for the City of Portland and its surrounding communities.

Business View Magazine first spoke with the OCC’s Deputy Director, Matt Pizzuti, a year ago, at which time he apprised us of some of the facility’s signature characteristics, including the recent addition of a 6,500-panel photovoltaic solar array on the building’s rooftop. This past month, we caught up with Pizzuti for an update on the solar system, as well as several other items on the Center’s agenda.

“The solar roof array has already produced nearly 1.7 megawatts of electricity,” Pizzuti begins. “It’s a two megawatt system and it hasn’t been in operation yet a full year, so it’s nearly producing to that level. We’ve had a few glitches along the way – some snow in January – but on days when the sun is out, there is 12,000 kilowatt hours per day, which is a substantial amount of energy – 20 to 25 percent of the total amount of energy used at the Center. It’s zero cost to the taxpayers of Portland and zero cost to the Convention Center. It was funded through a grant from Pacific Power, as well as the Energy Trust of Oregon and through the power purchase agreement with Solar City.”

Regarding some other of the OCC’s sustainable best practices, Pizzuti says, “As far as our waste diversion plan – that has been in effect now for a year and a half. The latest figures over the last six months show a compliance rate of 89 percent. So, nine out of ten customers are assisting us in following our waste diversion policy, which states that they are operating sustainably and not leaving the Convention Center with waste that cannot be diverted from the waste stream. They’re helping us sort material; they’re helping us provide ways to meet our goal of being one of the most sustainable convention centers in the world, and certainly in North America.” The Center has also been working on converting its lighting systems. “We’re about 80 percent switched from standard over to LED,” Pizzuti adds. “The only thing that we have left to do, as far as major projects, is back hallways and service areas out of the public eye.”

Another news item concerns the recent groundbreaking of a 602-room Hyatt Regency Hotel at the Oregon convention Center, across the street from the OCC, to be completed by the end of 2019. “A lot of groups love Portland and want to come here,” says Pizzuti, “but they look at housing their attendees and there’s nothing right by the Convention Center. It’s been our number one reason that we have been passed over for particular events. The hotel package in Portland has not been one that meeting planners are excited about because of its spread out nature. The hotels in town, themselves, are fantastic; they’re just not all here at the Convention Center. So, having an anchor hotel is a huge deal and it changes the pool of business that we can go after.”

Pizzuti adds that the Center is embarking on a $35 million renovation project to be completed in advance of the hotel opening. “We want to look like a brand new, fresh, desirable place to be, next door to a brand new hotel, rather than a 27-year-old building,” he states. “That will take place between this time, next year, and the following summer, to be completed by mid-2019.” The renovation will be financed by a combination of the Center’s revenues, a portion of the transient lodging tax monies, and some of its reserve funds. “Over the last few years, with Portland’s success as a destination, that fund has grown to the point where we can repurpose that money into capital projects to prepare for the hotel,” he adds.

Pizzuti believes that the renovation, coupled with the new hotel, will help the OCC increase its business, which will then positively impact the greater Portland community. “The more conventions we do, the better we service our region, our hotel partners, restaurants, retailers, taxis – everybody benefits when we get conventions in town,” he declares. “So, the interest in the Hyatt, from the very beginning, was to increase convention business. We figure that’s five to ten new conventions a year – citywide conventions that are using not just one hotel, but additional properties. The average was in the 40 to 50 range; we expect that to grow to the 50 to 55 range. That changes our ability to deliver on the promise that we’re built on – to bring those outside dollars into town.”

Now celebrating its 27th year, and with a new hotel on the horizon, the Oregon Convention Center is well-poised to continue its award-winning service to the people of Portland, while serving as a showcase for the many groups and travelers who wish to hold their events in the Rose City.

WHO: The Oregon Convention Center
WHAT: The largest venue of its kind in the Pacific Northwest
WHERE: Portland, Oregon
WEBSITE: www.oregoncc.org 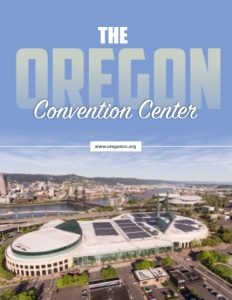