The historic seaport city of Bridgeport holds pride of place at the mouth of the Pequonnock River on Long Island Sound in Fairfield County, Connecticut. Located a mere 60 miles from Manhattan and 40 miles from The Bronx, Bridgeport is bordered by the towns of Trumbull to the north, Fairfield to the west, and Stratford to the east. This progressive community, known as “The Park City,” collectively embraces green as a way of life and a guiding concept for the future.

Part of that forward thinking is an initiative called BGreen 2020, a 10-year strategic plan for improving the environmental quality and livability of Bridgeport’s parks and neighborhoods and promoting Bridgeport as a location for the development of green industries and green employment. The initiative is the result of a public-private partnership between the City of Bridgeport and the Bridgeport Regional Business Council, a consortium of local business groups. By building on Bridgeport’s existing strengths, BGreen will modernize the city’s infrastructure, create wealth, intensify urban amenities, enhance environmental quality, enable revitalization without gentrification, and retain Bridgeport’s historic character. 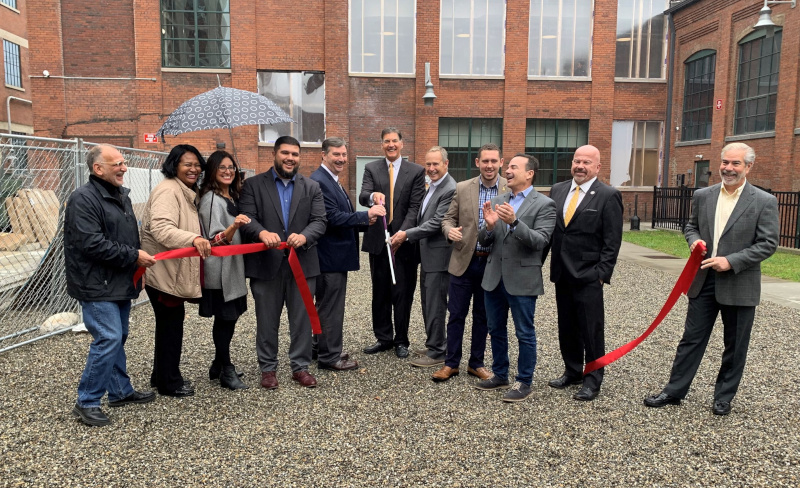 Early priorities are the creation of an Energy Improvement District to support energy efficiency and production, adopting a “Transit First” policy, developing a plan for open space use and maintenance, expanding recycling, and protecting the region’s waterways through enhanced stormwater management. A Green Collar Institute will train workers and act as an incubator for developing green industries.

Joe Gresko, the City of Bridgeport’s Green Issues Coordinator, serves in a capacity overseeing both energy and environment. He reports, “One project the city has been working on for a few years is now coming to fruition. Our Public Utility Regulatory Authority (PURA) just issued a decision on our thermal loop, a combined heat and power loop that would service our downtown area buildings (municipal and state) and also downtown residents with heat. We view that as an attractive feature to engage potential locators in our downtown area. The technology is very big in Scandinavia, and we’ve worked with a local company over the years to pass this through the state regulatory process via legislation that I co-sponsored, and also our Department of Energy and Environmental Protection. And now we have our PURA decision, so I’m very excited about that. We’re hoping to break ground before the end of the year, to take advantage of some zero energy credits.”

Bridgeport is potentially the first city in the nation to have such an extensive loop, in addition to already having one of the largest fuel cell farms in the U.S., which powers many local homes. The heat generated from that farm would be used in the thermal loop. Bridgeport also has an extensive solar array installed on a former landfill and that generates power for the city, as well. According to Gresko, “We also have an extensive residential program going on. When last I looked, the city was leading our state in the amount of residential solar hookups, so we’re trying to balance it out between business and residential benefits from our energy portfolio. That portfolio will, hopefully, be expanded. As a state legislator, I serve on both the environment and energy committees and, last session, we had our Department of Energy and Environmental Protection issue another RFP for offshore wind generation. Vineyard Winds has been front and center in Massachusetts with the idea of putting a wind farm off of Martha’s Vineyard, and they’re very interested in locating a facility here in Bridgeport. So, we’re trying to round out our portfolio in that way.”

Following Superstorm Sandy and Hurricane Irene, earlier in this decade, there was a call for a more resilient energy grid, so Bridgeport established a natural gas-fuelled micro-grid behind city hall that powers not only that building but also the police dept and seniors’ center. The project has been highly regarded across the country. People from Indiana and Kentucky have come to see how it works and how they can duplicate it in their own states. “We’re attacking on all fronts,” says Gresko. “Bridgeport is the largest city by population (145,000) in Connecticut – we’re not the capital, and we don’t have Yale University like New Haven does, so we view the green and sustainable avenue as a way of putting our stake in the ground and letting people know that’s how we roll here.”

Building-wise, Bridgeport has a new high school and two brand new grammar schools that have taken advantage of the LEED certification program, and have earned both Gold and Silver in that aspect. As far as the environment, Bridgeport, being known as The Park City, boasts several large parks, including Seaside Park which borders the University of Bridgeport and Beardsley Park, home to the state’s only zoo, Beardsley Zoo. There is also another park, close to 400 acres, with quite an interesting history. Back in the day, Remington Artillery was the ammunition provider for the war effort. Fast forward multiple decades later and there has been a large remediation project happening on the site, thanks to Dupont De Nemours, Inc., and they are finishing that up. So, Bridgeport will have the benefit of 400 unspoiled acres that haven’t been touched in a hundred years.

Gresko is spearheading an effort to create a land trust that, hopefully, will be able to save and salvage as much of that property as possible over the next few years. He reports, “As far as doing economic development in a green way, I look at these 400 acres and we’re never going to get this chance again to preserve as much as we can. That effort is going to take, probably, two to three years more of remediation to get all the ‘artillery shells’ safely off the property. And we’re not doing this alone. We’ve been working with the Trust for Public Land that has been very helpful in multiple avenues, as far as our smaller parks in the city. We’ve done upgrades that have included neighborhood involvement; we’ve also partnered with the Nature Conservancy on massive tree planting programs; and we just unveiled a new rain garden at a local school that can be used for stormwater control and also education for the kids. It just looks a whole lot better than it did. We’re trying to do a diversified portfolio approach on many levels, rather than putting all our ‘green eggs’ in one basket.”

Bridgeport’s population has stayed steady over the last 10 years, despite the trend of exodus from the northeast colder areas to the south and the west. In fact, the city is seeing an influx of younger people in the downtown, and renovation projects of historic buildings into downtown residences are ongoing. Bridgeport is going through a renaissance as people decide to move back to the urban area, and the city is definitely seeing the benefits of that with a resurgence of the downtown. Transportation is no problem, with a train station and a bus station right in the core, connecting to Metro North – one of the most-used commuter lines in the country, as people commute down to Stanford and New York.

The city’s tax base is a mix of residential, commercial, and industrial, with some significant employers. Gresko notes, “We have a pair of hospitals in our city that service not only us but the surrounding suburbs and employ a large number of people. The main headquarters of Sikorski Aircraft Corporation is in our neighboring town of Stratford, but they also have a facility here in Bridgeport and they are committed to staying here, as they anticipate even more defense contracts with governments across the world. They employ around 600 people just in an off-shoot facility. And we have all the ancillary businesses that play off of that.”

Looking to the future, the city of Bridgeport has just updated their 10-year Comprehensive Plan. Gresko says, “We made a point to go out to all the neighborhood revitalization zone meetings, and we put up a website that allowed people to put their opinions in. So, this wasn’t done in a vacuum. We’ve had a lot of public input and are anticipating more, because it hits quality of life and aesthetics. But also, I’m a big believer in the environmental justice kind of viewpoint, in that oftentimes your urban residents are the victims or poor zoning or conditions, which if discovered in a suburb would not be tolerated. So we’re trying to relate the fact that we’re not just some pie in the sky environmental tree huggers – we’re here to make your life better. And I think people in Bridgeport are really starting to realize that.”