What happens in Vegas…

Even over-the-top Las Vegas has never seen the likes of this – a SuperStore Entertainment Complex that rivals anything on “the strip” for sheer WOW factor. What makes it so special? Well, beyond its spectacular rooftop array of giant waving lotus flowers, when Planet 13 opened its doors on Nov. 1, 2018, it became the largest, most advanced retail dispensary for cannabis in the world. Planet 13 Holdings, Inc. operates as a vertically integrated cannabis organization, holding six licenses in the Nevada market. Its shares trade on the Canadian Stock Exchange (CSE) and the OTCQB venture market.

Business View Magazine recently spoke with Larry Scheffler, Co-CEO of Planet 13 Holdings, Inc. for a behind-the-scenes perspective of this super-creative company, and his insights into the Nevada cannabis industry. The following is an edited transcript of that conversation.

BVM: What is the story behind Planet 13 Holdings? 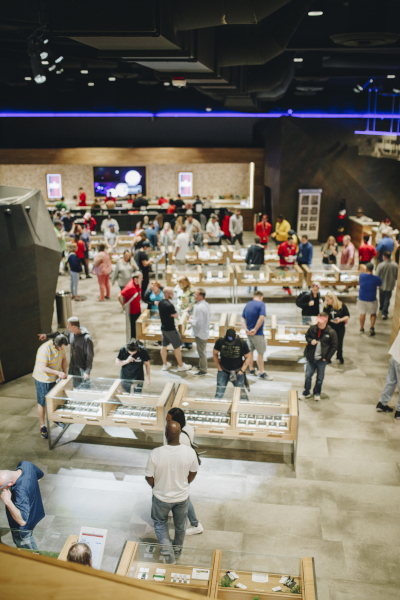 Scheffler: “Long story short, about five years ago my long-time attorney, friend, and co-CEO of Planet 13, Bob Groesbeck, called me with the question, “Do you know they’re licensing marijuana here?” That led to talk about how we wished we’d been around in 1931 when they’d licensed gambling, and after prohibition when they’d licensed alcohol, and we thought – this is the chance of five lifetimes to be here for one of the last sins that prohibition ends.

“So, in 2015, we applied and got a medical cannabis license, opened our first store in 2016, and got a recreational license when that was legalized on July 1, 2017. We were six miles southwest of Mandalay Bay – along with 46 other people, that was a lot of dispensaries fighting for 2.3 million locals. We thought, why are we arguing about 2.3 million people when there are 55 million visitors on the strip? So, we did our homework and looked at all the zoning; you cannot sell or have a dispensary within the gaming corridor – that’s about a mile either side of the strip. But there was a donut hole they’d zoned around – 1,500 feet from Wynn’s front door at the heart of the strip.

“We found a 112,000-sq.-ft. building we liked, and it took us a year to talk the landlord into leasing it to us. Our first phase we opened was 40,000 sq. ft., for offices and dispensary. Trident Construction is our general contractor. This was an old, tired building – great bones – but it was just a giant warehouse cooler. Everybody told us there was no way we’d get it done in five months. Trident made it possible. We could not have done it without them, they were fantastic. And our interior designer, Brianna Tiberdi, from TSquared was amazing to work with. Those two groups were paramount in executing our outrageous time frames. In March 2019, we broke ground on 23,000 sq. ft more for a coffee shop, a bistro, and a 15,000-sq.-ft. production facility.”

BVM: What kind of unique “experience” do you provide?

Scheffler: “Being in Las Vegas, we tried to out-Vegas Vegas with shows we imported from around the world. From floating orbs, the first permanent installation in the western hemisphere, to the 18-foot diameter ball out front with water coming over it, to interactive floors when you first walk into the building that are like giant iPads – 10 ft. by 16 ft. – it’s like walking across a koi pond. In the dispensary are orbs three feet in diameter driven by indoor GPS that do a show once an hour, floating above people buying product, changing colors and patterns, and dancing up on the 25-foot ceiling. The orbs are from Airstage, a small but very technically-savvy company.

“If you spend $50 on purchases, you can go to our 124-foot-long outdoor art wall. If you stand 30 feet away after dusk, you can laser spray paint onto it – messages like, ‘Jill, will you marry me?’ Everybody takes a picture and puts it on social media and helps advertise for us. Then, you press a button and it’s gone. I do hours of research to source these special effects. Then Bob and I sit together and decide which one we’d rather do, which draws the most customers, which is most entertaining for the average person. We put our budget at $1 million for this opening and it came to a total of about $1.5 million, so we had to cut some.

“Our new project takes up one third of the 15,000-sq.-ft. production facility we just announced. It’s 120 ft. long and 30 ft. deep with solid glass where you can watch the chocolates and gummy squares being made, and the bottling of the beer – like a Willy Wonka’s Chocolate Factory. On the little level above it, KUKA Robots from Germany has created two robotic arms – one that takes the cans and puts them on the conveyor through the canning process and the other puts them in the cases. That’s all fine but after a while it gets boring to us, so we had the company put one on a rail and, once an hour, it goes over to the other and pretends to hit it. Then they start dueling with wooden sticks. It’s all choreographed. One knocks the stick out of the other’s hand, the loser bows, the winner uncaps a bottle of beer, while the other one tilts an empty glass sideways, and the winning arm pours. They share a beer, then go back to work. Our shows always have to give something more for the tourists.”

BVM: What do your cannabis operations entail?

Scheffler: “We started with Medizin as the name of the company. Then, when we got our recreational license, we changed it to Planet 13 and Medizin became our main product line. We’re vertically integrated so we have a grow, a production, a medical, and a recreational in Clark County. And we have a grow and a production in Nye County. That second site location is 120 miles northwest of Las Vegas.

“A funny story about that: a year and a half ago, we also bought a legal brothel in Nye County. The owner had died and we bought it from his wife. For about 14½ minutes, we held that brothel, then gave up the license, because we only bought it for the 80 acres of land. We then went to Nye County and had it hard-zoned for 2.4 million sq. ft. of cannabis grow. It’s probably the largest area hard-zoned for cannabis in the U.S., right now. We only have 10,000 sq. ft. up there to maintain our license, but it will be a great asset for the future. It’s got municipal water; all the power you could need; in a remote area – no neighbors. A perfect location.” 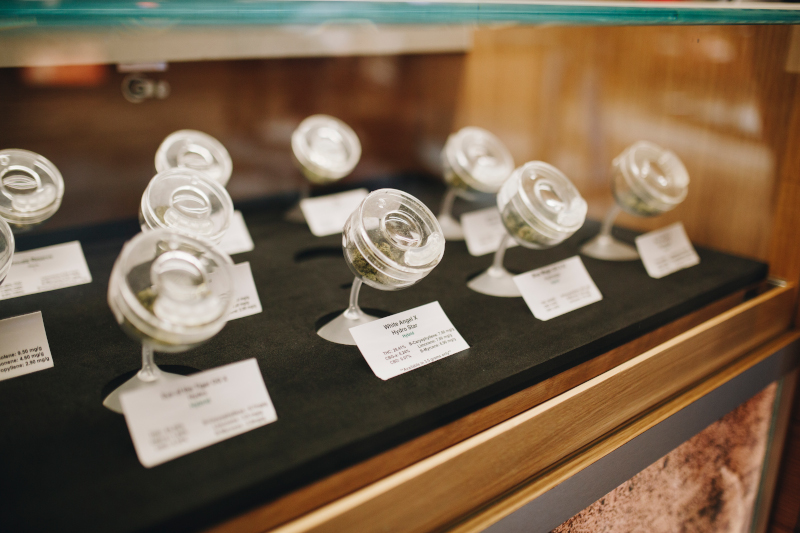 BVM: Can anyone walk in and buy your products?

Scheffler: “The SuperStore is open to everyone. The good part is when you come in the Grand Hallway – which with the second phase done will be a football field long and 30 ft. wide – you don’t have to be 21 because you’re not in the dispensary. On the righthand side, we have guards and turnstiles and you need a card we issue with a barcode that allows you in the dispensary, so we know you’re 21. If you’re underage, you can wait in the Grand Hallway, go in the Bistro, the Coffee Shop, shop in the Gift Store. Those options attract a lot more clientele.

“The new Governor of Nevada is forming a Cannabis Commission, like the Gaming Commission. They will make all the rules for the state, because right now, it’s confusing and everyone is interpreting the law differently. When those regulations are in place, we’ve dedicated about 20,000 sq. ft. for a cannabis consumption lounge and a future club, if they merge it together with alcohol. We’d also like to have a 5,000-sq.-ft. patio, 15 ft. in the air. It faces the street and we have 65,000 rooms looking down on us. We’re going to put a splash pool up there, where you can stay cool, dance in the water, smoke cannabis… nobody in the world has this right now. The state limits the amount of cannabis you can buy to one ounce and medical is still a big thing for us. We didn’t forget about the locals on our loyalty program, and the veterans. They always receive a discount.”

BVM: Is future expansion on tap?

Scheffler: “Absolutely. It may not be this large, but we’d like to have many Superstores, four or five times larger and better than the nearest competitor, and still an attraction for that area. We have to blend into the fabric of the cities we’re moving into. Not every place is over the top like Vegas but everybody still wants to be entertained. And people tell us how safe they feel here. Our show of force on security – outside, inside, every entrance – the good lighting, the atmosphere. They are so surprised and want to come back again. It’s like walking into a high-end shopping mall of a five-star hotel. We’re looking in four different states, right now. Watch for announcements very shortly. We’re very excited. Our big thing is location, location, location.

“There is nothing like Planet 13 in the world in size, in entertainment, in a destination. None of what we have has ever been seen in Vegas. People have seen the rest and this is entirely new. It’s a sensory overload. Everyone is welcome to come and enjoy what we’ve done!”