Greenville, North Carolina – The gem of the east

The gem of the east

Greenville, North Carolina is the county seat of Pitt County and, with a population of approximately 92,000, the 10th most populous city in the state. It is located about 85 miles east of Raleigh and 90 miles west of the Atlantic Ocean. Greenville, North Carolina was originally founded in 1771 as Martinsborough, named after the Royal Governor, Josiah Martin. In 1774, the town was moved to its present location on the south bank of the Tar River, three miles west of its original site. In 1786, its name was changed to Greenesville in honor of General Nathanael Greene, the American Revolutionary War hero. It was later shortened to Greenville.

During the 19th century, cotton was the area’s leading agricultural crop, and there were several established steamboat lines transporting passengers and goods on the Tar River. Late in the century, tobacco surpassed cotton as the leading money crop, and Greenville, North Carolina became one of the state’s principal tobacco marketing and warehouse centers. Greenville’s current economic development began in 1968, when Burroughs Wellcome, a major pharmaceutical research and manufacturing firm, located in the city. 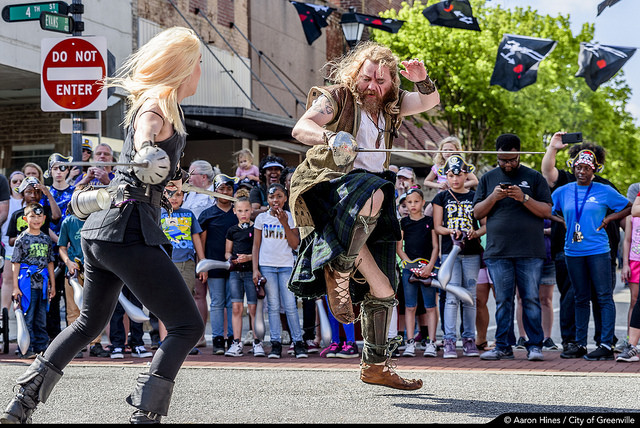 Today, in addition to a thriving pharmaceutical sector, Greenville, North Carolina and Pitt County have become home to many other major industries and businesses including Harper Brush; Grady-White Boats, Hyster-Yale, which designs, engineers, manufactures, sells, and services a line of lift trucks and aftermarket parts; ASMO, a producer of front wiper motor linkages, rear wiper motors, arms and blades, and radiator fan motors; and The Hammock Source, the world’s largest hammock manufacturer.

“We are known as the cultural, educational, economic, and medical hub of eastern North Carolina,” claims Brock Letchworth, Greenville’s Public Information Officer. “About 42 percent of the people here have college degrees and we’re proud to say that we just recently posted one of our lowest unemployment rates in 20 years, at 3.1 percent. Additionally, we’ve got a vibrant and thriving uptown district in Greenville that offers art, music, food, festivals, and a number of unique and locally-owned businesses, galleries, shops, and restaurants. We recently completed a citizen survey and 80 percent of the respondents considered Greenville to be a great place to live, while 70 percent cited Greenville as a great place to get a job or grow a business.’

Greenville, North Carolina is a rapidly growing city that has recently made some significant upgrades to its infrastructure. Public Works Director, Kevin Mulligan, talks about a major project that incorporates several noteworthy sustainable and environmentally-friendly aspects: “A large stormwater project, Town Creek Culvert, involves the replacement of the large culvert system that traverses through our uptown area,” he begins. “The routing actually bisects ECU from our business district. A key point for us was sustainability – what measures can we take to ensure a green project in a developed urban area? While this can be a challenge, we were fortunate to find opportunities to implement green practices, such as removing nutrients – phosphorous and nitrogen – that deplete oxygen levels in our river.”

“Instead of a hidden stormwater collection system with piping that is normally underground,” Mulligan continues, “we’re doing it through the use of constructed wetlands, which holds water and filters it; bio-retention cells; permeable pavers incorporated into our roadway repairs; tree boxes, where underground stone beds allow for infiltration; and a filtration, or screening, system that is built into a series of step pools – the technical name is ‘regenerative stormwater conveyance,’ and we have two of these implemented into the project. So, the green infrastructure that we implemented will remove several hundred pounds of phosphorous and nitrogen, annually, and besides being a sustainable feature in removing nutrients, is also less costly to install. The project was the recipient of the largest green infrastructure project in the state; it cost $33 million and we’re saving about $9 million through the implementation of this grant. We’re showcasing our system and treating it as an educational opportunity, while it also serves as the foundational support for our continued economic development.” 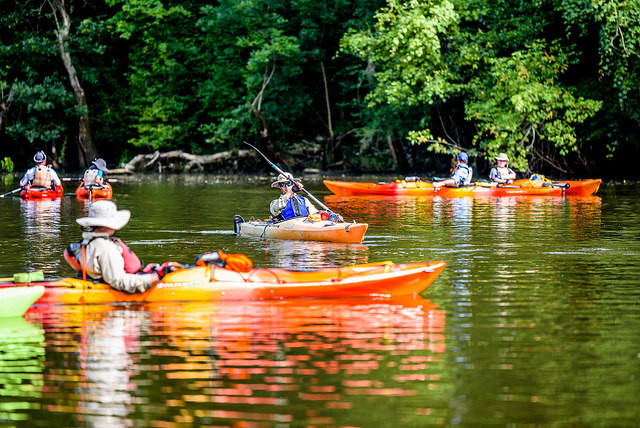 “Another project in the uptown area is our intermodal facility,” Mulligan adds. “Again, sustainability was paramount, there. The finished product is a LEED-certified building – the G.K. Butterfield Transportation Center. It’s a beautiful building made from sustainable timber and glass. Some of the major architectural features are glulam beams – wood pieces that are glued together. The timber comes from managed forests; the glulam is as strong as steel, but has a much lower carbon footprint. Other items in the building are water and energy metering; low VOC (volatile organic compound) emitting materials; hearing induction loops (an assistive listening technology for individuals with reduced ranges of hearing), and, obviously, connections to our public transportation – Amtrak and other local transit.”

Greenville has also made substantial improvements to its uptown district – more than $650 million in public and private investment over the last ten years. “Most downtowns serve as the ‘living room’ for any community,” says City Manger, Ann Wall. “It’s the place where you gather and celebrate, where you entertain, where people come to interact. And we try to do all of that with our downtown, particularly with Millennials and the young students at East Carolina University. They want a downtown with interesting places to go, fun activities, and so we do that with a combination of infrastructure development, providing incentives to property owners to redevelop properties, and by providing events and activities that they can participate in.” “We continue to offer small business grants and façade improvement grants to try to attract businesses to our uptown district and to make it more aesthetically pleasing for people who visit,” Letchworth adds.

Regarding other infrastructure projects on the city’s agenda, Mulligan notes, “We’re working with the NCDOT (North Carolina Department of Transportation). We’re investing approximately $450 million in roadway improvement projects throughout the city. There are eight major, ongoing road projects, right now. And, in the last five years, the city has added several miles of greenway; any time we’re upgrading or resurfacing a road, we’re looking at installing bike lanes. In the uptown area, we have lots of sidewalks and alleys that connect and weave throughout the city for increased walkability.” Wall adds, “In North Carolina, there are city roads and state roads. In Greenville, every major state road is either under construction or under design, which shows the amount of growth and development that we have seen – that so much of our infrastructure is under construction or soon to be under construction.” 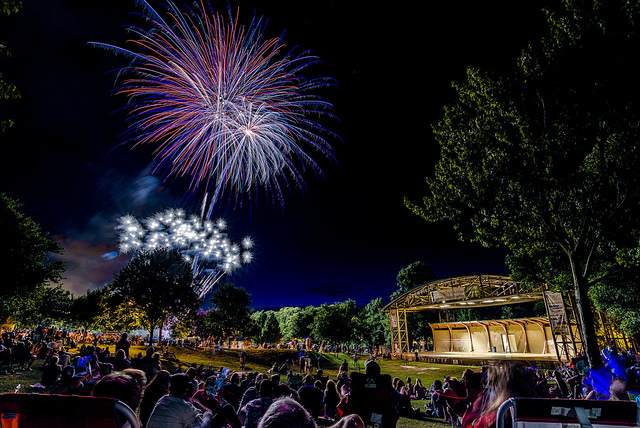 Greenville, North Carolina also has more than 25 parks and recreational facilities including numerous gymnasiums, recreation and community centers, swimming pools, tennis courts, a soccer complex, softball and baseball fields, playgrounds, a greenway, as well as The Town Common, a 20-acre park on the banks of the Tar River. Letchworth remarks, “It has an amphitheater, canoe and kayak launches, a fishing pier, greenway access, a playground – and we’re looking at some future additions, which will include a gateway plaza on the park’s west end, and, potentially, some private restaurant or retail opportunities on the east end. It has become, over the past year or so, a hot bed for entertainment. We’ve had a lot of concerts and events take place at The Town Common, and we’re going to continue to develop that, while also preserving some of the lovely green space that’s there.”

All in all, Greenville, North Carolina is, according to Letchworth, “a rapidly growing community that offers a lot of diversity in terms of leisure and cultural activities, but also reliant on our medical and university community. “The city provides great service to our residents and there are a lot of great things going on in the community,” echoes Wall. “We’re the gem of the east.”

Check out this handpicked feature on the North Carolina Building Performance Association.

WHERE: About 85 miles east of Raleigh and 90 miles west of the Atlantic Ocean

Since 1959, Grady-White has been renowned in the boating world for exceptional boats. Consistently ranking as the marine industry leader in customer satisfaction, they build high quality, safe, reliable, boats with superb hull performance and unsurpassed long-term value. Grady-White owners will tell you – There’s no boat built like a Grady!

Pitt County, North Carolina is the Greenville, NC MSA, one of Forbes.com’s Top 10 Best Small Places for Business and Careers.  Go east of Raleigh, toward the famous Outer Banks, and you will find us, an economy flourishing with a dynamic combination of manufacturing, education, healthcare and commercial sectors.

Greenville Utilities provides Electric, Natural Gas, Water, and Wastewater utility solutions to one of the fastest growing regions in North Carolina. With exceptional customer service, reliability, and environmental stewardship at the forefront, Greenville Utilities has the capacity to meet the Greenville region’s utility needs well into the future. 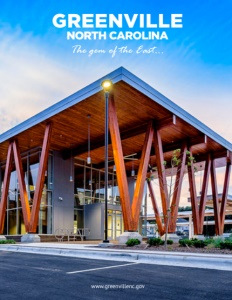