Paris Healthcare Linen Services provides textile and linen management services to hospitals and other health care organizations, including surgical centers, and non-acute and long-term care facilities. It is an operating unit of Paris Companies, which also includes a uniform rental services company.

The company was originally founded in 1918 in Brockway, Pennsylvania, as Paris Veri-Safe Drycleaners. It was bought by Jack Stern, the father of current CEO, David Stern, in 1951, who changed its name to Paris Cleaners. David, who began working in his dad’s drycleaning establishment at age five, bought half the business in 1980 and established Paris Healthcare Linen Services in 1990, to provide a linen management service for a local hospital in DuBois, PA.

Over the next several decades Stern expanded the company through organic growth and several acquisitions, opened new locations, and by 2012, Paris Companies had become a $50 million a year operation. Today, Paris Companies is the largest, independently-owned laundry and textile service company in Pennsylvania, with three state-of-the-art processing and distribution facilities in Pennsylvania and Ohio, and over 4,000 customers in five states: Pennsylvania, Ohio, New York, New Jersey, and West Virginia. All Paris Healthcare plants are accredited by the Healthcare Laundry Accreditation Council (HLAC). 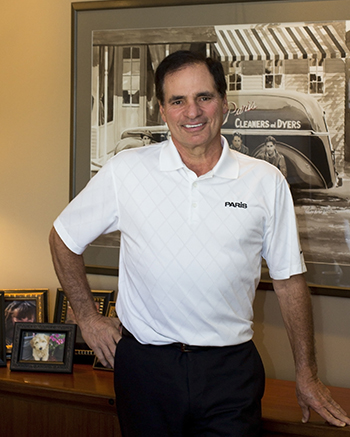 In the company’s DuBois plant’s soiled laundry area, employees open plastic, recyclable bags of dirty laundry, sort it, and feed it onto conveyor belts. The linens are then mechanically bagged and travel onto a rail system that eventually drops the laundry into one of three large tunnel washing machines, valued at $1.5 million apiece. Inside the washers, the water temperature reaches 160 degrees, and the linens are cleaned with hydrogen peroxide. After laundry is washed, it is transferred via rail conveyor belt to the plant’s clean side, where it is placed in dryers that reach temperatures of up to 390 degrees. Employees then feed the linens through irons that reach temperatures of 350 degrees.

Linens can be sorted, laundered, dried, folded, and shipped back to customers in less than four hours. In addition, the company’s proprietary P-LINK Textile Management System gives its customers monitored, cost-per- adjusted-patient-day information, comprehensive performance data, and real-time tracking that puts them in charge of their linen and drives down costs.

This past January, Paris Healthcare Linen Services merged with NOVO Health Services. The merged company now does business as NOVO Health Services; the Paris trade name will continue in use for an indefinite period, and Stern serves as CEO of NOVO. Combined, the new NOVO Health Services becomes a supra-regional competitor, operating seven HLAC or TRSA hygienically clean processing facilities in the Eastern U.S. (TRSA is a not-for-profit trade association for the Linen, Uniform and Facility Services Industry. Its business mission is to protect, promote, and professionalize the industry of its members.) Additionally, through its SRI Surgical business unit, NOVO operates three sterile processing facilities providing reusable surgical gowns, sheets, and other textile products and stainless basins to the industry.

Customer focus and an old-world work ethic were the founding principles of Paris in 1918. Today, after a century of operation, Paris Healthcare Linen Services continues to serve its customers well, while exceeding their expectations.

WHERE: Headquarters in DuBois, Pennsylvania