Uptown Cheapskate out to boost the resale shopping experience.

It should come as no surprise that Chelsea and Scott Sloan wound up working together.

After all, the brother-and-sister tandem grew up alongside parents who’d created a children-centric franchise resale operation – Kid to Kid – that’s since grown to more than 100 stores across the U.S. and Portugal. The siblings grew up in the stores, and, upon Chelsea’s return from a church mission to Alaska in 2006, they began planting the practical seeds for an operation they could call their own.

Within three years, their college-age groundwork began to bear fruit.
The first location of their trendy resale clothing concept for teens and young adults opened its doors in Salt Lake City in 2009 and became a franchise offering within months. It has subsequently evolved to more than 40 locations in 17 states while becoming a now three-year mainstay on Entrepreneur magazine’s Franchise 500 – an annual listing of the franchising industry’s top opportunities.

“My sister and I set out to kind of reinvent the resale industry,” Scott Sloan said. “We were cash-strapped, certainly conscious of the money we were spending on things like fashion, but as a college student you want to look nice and the social scene is important for a lot of college folks. We saw the other options that were out there in terms of resale shopping and nothing really resonated with us. 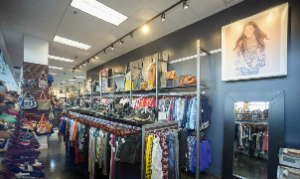 BaseCamp Franchising is the family-owned franchisor apparatus that oversees both the Kid to Kid and Uptown Cheapskate brands, and while the support teams operate jointly and share a Salt Lake City headquarters facility – the executive management teams remain separate and independent.

The set-up, he said, allows the benefits of working with relatives while ensuring individuality, too.

“(Chelsea and I) both knew early on in our college schooling that we at some point wanted to do our own thing,” Scott Sloan said. “This was a great opportunity for us to break off, create a new concept that we could change some of the things in the culture of the way that we do things at Uptown. The decisions that are made over there aren’t necessarily made over here.
“Do we certainly learn from their mistakes and successes? Yes. And vice versa. It’s been great to have that opportunity to work with family and solidify those bonds in a business environment.”

All but two of the Uptown Cheapskate roster’s 45 locations – the original store in downtown Salt Lake City and another in one of the city’s prominent neighborhoods, Sugar House – are owned by franchisees, which reflects a corporate philosophy to have a distinct local flavor in the communities where stores are located while retaining a corporate testing ground for operational changes.

The most typical store varieties are 4,000 square-foot spaces within inline retail strip centers that are anchored by a significant tenant like Target, and are within close proximity to a mall or university. Each operation will have roughly 10 to 12 employees with varying work weeks, and owners are required to be involved with daily operations for at least the first six months after a store opening.

“We strongly suggest that they stay involved on a daily basis thereafter, too,” he said. “What we see happen in practice is that, in an ideal scenario, owners will step out of an operation once it’s hit its stride and the systems have been put in place and staff has been trained on our systems. The owner will have the ability to step out, and our hope is that they’ll step out to then go open another location.

Scott Sloan said Minneapolis-based Plato’s Closet is the entity he views as the company’s primary competitor, though some other large-scale resale operations exist, too, that are not franchise-based.

He conceded that Goodwill is the main player in the soft-goods resale marketplace, though the business models are different because items are donated to Goodwill before top-end products are separated and sold in its retail and boutique outlets. Thus, he’s focusing on different targets.

“We saw that there was an opportunity out there to appeal to a wider range of customers,” he said. “Our research shows that only 19 percent of the pop will shop resale in any given year. You can look at it as being a small market, or a relatively small market, but we like to take a more positive outlook on it and look at it as an opportunity to start cutting into the 81 percent that doesn’t shop resale.

“We’ve tried to position ourselves in a 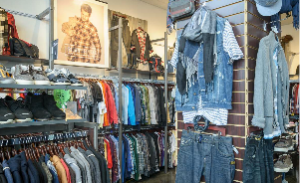 way that a customer coming into our store, either to sell us products or to buy from our selection, would look at our operation and look at the way our stores look and say ‘Wow, this doesn’t really feel like what I would consider to be a resale operation.’”

The franchise fee is $25,000 for a renewable 10-year agreement with an ongoing 5 percent royalty.

“Our goal for the past few years has been to reach 100 stores by the end of 2017, so we’re still pushing for that,” Scott Sloan said. “But more than that, we need to open successful locations.

“We realize that the quickest way to fail at our goal is to open a number of locations that aren’t successful. It’s definitely a balancing act between growing at a pace where we can still provide that hands-on support for these new owners to help guide them through their first year or more of operation, and at the same time growing fast enough so that we can reach our goal.

“It’s a double-edged sword, but I think we’ve so far done a good job of balancing that.” 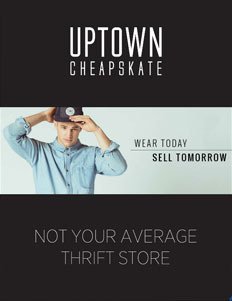