CEO: Sbarro re-emerging with “a new lease on life”.

The legal term is “reorganization.”

But David Karam prefers to label it a prime opportunity for “refreshment.”

As chief executive officer at Sbarro since early 2012, the restaurant/franchising veteran has helped steer the now 59-year-old business through a tumultuous stretch he concedes may have “tarnished” the brand, though he insists it simultaneously cleared the way for a rapid recovery.
“It was constructive in the sense that it allowed us to clean up the balance sheet, and it also allowed us to close some unprofitable locations,” Karam said. “It really allowed us to do what a reorganization should, which is get the business strong so you can grow it again. We are in the midst of really refreshing the brand. We really look at it as a new lease on life.”

The initial stages of the process yielded tweaks to menus and designs across a roster of 625 franchise locations and 200 corporate stores, alongside a re-steering of the brand’s position back toward a longstanding pizza-centric legacy that had already made it the world’s sixth-largest pizza chain.

Karam said marketplace testing of the refined “New York-style” and “pizza by the slice” elements has been very positive, and that substantial traction has already been gained from the company’s decision to go back to items that are most authentic to its mid-1950s heritage. Much of the steam-table food options were eliminated from menus in favor of emphasizing fresh-made pizzas and strombolis, a made-to-order pasta offering, contemporized beverage offerings and salads. 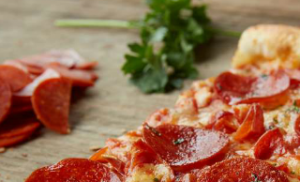 “When you have a mature brand like Sbarro, you can’t just change your brand position. You’ve got to really reclaim elements,” he said. “That’s not only authentic and a bit of a refresh on the menu offerings of the brand, but it also is very relevant to where the consumer is. It’s a combination of what is claimable based upon the heritage of the brand, but also what’s relevant to the consumer and what’ll allow you to grow the business at an above-industry average rate.”

And, because Sbarro is already such a prominent name in such a broad restaurant category, it won’t take a whole lot of market share progress to yield significant sales and growth opportunity results.

“Pizza’s a big category and we’re a big player in pizza,” Karam said.

“It has improved the box economics. It’s reduced the size of the footprint that we need for new store development, and it’s improved the economics – less labor, less food costs – and we’ve been able to achieve that despite the fact that we put 20 percent more cheese on our pizza to really enhance the product, and crafted a more compelling value proposition. It all fits together pretty neatly, and we’ve tested that on an iterative basis with very, very solid results.”

Now, he said, the task shifts to reinvigorating growth.
Much of Sbarro’s recent expansion has been international in nature, with 75 new stores opening in 2014, following 68 in 2013 and 60 in 2012.

Meanwhile, the objective is to try and reverse a trend of domestic stagnation in the U.S. over the same three years, by doubling-down on its wheelhouse sites – in malls, casinos, airports, travel centers, downtown business districts and college campuses – while seeking out smaller-footprint sites where people are more naturally inclined to eat pizza by the slice and carry-out pizza.

“Those are opening up new growth opportunities for us domestically,” Karam said.

“And it’s our hope and expectation that we’ll get this brand growing by 30, 40 50 stores a year domestically, to complement that great international growth. We’ve remodeled some stores. We’ve opened some new ones, both domestically and internationally, so the mileposts are in the stores that have already opened. We’re very confident.”

The first franchisee conference since the 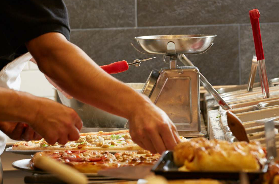 company emerged from bankruptcy and relocated its corporate headquarters to Columbus, Ohio took place in October, and the recovery process was further validated by strong attendance from both domestic and international operators.

In fact, he said the tumult of the last few years hasn’t at all negated interest from new candidates.

“It’s not been a problem at all,” Karam said.

“And frankly, it’s been an exciting part of the job for me to have the opportunity to tell the Sbarro turnaround story. We’re honest and candid with people to let them know that we’re in the very early innings of the turnaround. But we’ve got tangible evidence. We’ve got stores and menu and packaging changes that we can point to as a part of that transition. We’ve got a much stronger balance sheet that we can share with them that shows a company that is financially is very strong.”
Franchisee candidates are required to have a minimum net worth of $1 million – excluding their primary residence – and $350,000 in available liquid assets.

“We’re not necessarily looking for that large, experienced operator,” Karam said. “We’re looking for a hands-on operator and somebody who has a certain entrepreneurial flair and understands that this is an opportunity for them to get involved with a lower entry point, and an opportunity to be a little bit more creative from a franchising standpoint in terms of marketing and finding opportunities to deliver the product. There’s a good opportunity to make solid profitability and return on that investment.”

Going forward, making sure the company is franchise-friendly is a priority.

Keeping the concept relevant in the marketplace and appealing to customers is job one toward that aim, and it’s followed closely by ensuring franchise partners continue to feel good about their association with the brand, the corporate leadership and the operation’s overall integrity.

“If we take care of those things, our customers as well as our franchise partners,” Karam said, “then the rest will take care of itself.”

Check out this handpicked feature on Otto Pizza – What a slice!

WHERE: Corporate headquarters in Columbus, Ohio 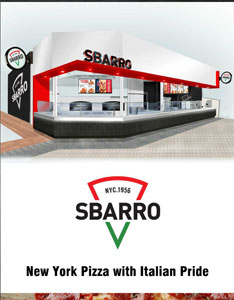