Business View Magazine interviews Ken Griggs, Director of Operations at the Monterey Regional Airport, as part of our series on regional airports.

Pebble Beach, Cannery Row, Carmel-By-The-Sea, Big Sur and the Monterey Bay Aquarium are iconic locations within Monterey County, California. The County offers a blend of small, scenic, coastal cities, iconic golf courses, is the #1 producer of fresh food, and is one of the largest premier wine producing regions in California. The City of Monterey is tucked into the peninsula on the rugged central coast of California. Its beauty, brawn, and rich history bring in many visitors, causing its population to grow to over 70,000 during the tourist season. Monterey is part of a county that attracts 4.6 million overnight visitors annually, and its access, employment, and economic development are made possible through the Monterey Regional Airport.

The Monterey Regional Airport is a small, non-hub airport, located three miles south of the city center. Its operations include four commercial airlines, 211 hangars and tie downs, 55 business tenants and 400,000 passengers per year. Ken Griggs, Airport Operations Manager Director of Operations, explains the volume that moves through the runways: “In 2017, we had about 112,000 operations. An operation is a departure or an arrival. Of those operations, a little less than 8,500 of those were commercial carriers. So, the vast majority of our operations are general aviation related.” General aviation refers to all civilian flights, excluding passenger airline services, and includes private and corporate jets, single-engine planes, and flight trainings.

Griggs continues, “We have a lot of transient corporate business traffic. We’re a destination, with large marquee events that bring foodies, cultural and sports enthusiasts, and wine lovers all year round. And we have a lot of leisure activities for families to enjoy, so it’s very attractive for businesses to come here as there is something for everyone.” In order to serve all the travel and extracurricular needs of visitors and residents, the airport accommodates accordingly.

“We have base tenants here that encompass general, corporate, and light aviation,” Griggs reports. “We have two major full service fixed base operators (FBOs). Monterey Jet Center and Del Monte Aviation facilitate the executive business clientele through their own terminals on the property, so all transient traffic goes to one of those facilities.” The operators provide aircraft line services, fuel, aircraft storage, maintenance, and aircraft rental. Through their lease terms, they are also allowed to sublease space and have arrangements with maintenance technicians and flight schools. Therefore, the FBOs are able to, according to Griggs, “augment some of the services we can’t provide.”

Two flight schools are found onsite at Monterey Regional Airport: Aerodynamic Aviation is a public facility and the Navy Club is a members-only operation. Multiple defense/military institutions provided a strong presence in Monterey, such as the Naval Postgraduate School and the Defense Language Institute. In fact, within a year of being established as the Monterey Peninsula Airport District, a special district of the state, the airport was used as a naval facility to support World War II efforts. Leased to the United States Navy for a dollar a year, it was turned back over for civilian use after 1945. The same patterns that drove early development in Monterey, such as growth of tourism, agriculture and the defense presence figured prominently in the establishment of the Airport.

Since then, the airport has been able to grow as it sees fit. As a special district, the airport is not owned or operated by a city or county. An elected, five-person board of directors is responsible for fulfilling the airport’s mission, which is three-tiered:

In its efforts to keep up with the needs of the community, the airport is working on a long-term plan. “We are in the environmental review of our 20-year vision,” explains Chris Morello, Senior Planning Manager of Development and Environment. Within the vision are “quite a few proposed possible improvements, such as a new relocated passenger terminal, general aviation facilities, a relocated commercial ramp, and a relocated aircraft rescue and firefighting facility.” While these endeavors are still proposals, yet to be approved or funded, Morello explains that continual infrastructure improvements keep the airport competitive. “San Jose is 75 miles away and San Francisco is approximately 101 miles from here,” she details. “They have larger airports, with a more diverse fleet mix. So when you have those relatively nearby, low-cost more diverse options, they are definitely competition.” There are also four nearby general aviation airports as well; Salinas, Watsonville, Hollister, and Marina all are smaller general aviation airports that are within driving distance to Monterey.

So when it comes to what sets Monterey Regional Airport apart from its large and small competitors, “It’s pure convenience,” explains Griggs. “We are the most convenient airport in the county. With all the municipalities near the airport, all destinations are within 15 minutes. Basically, once you get off the airplane, you are home within 5-15 minutes or at your vacation destination.” He elaborates on the ease in which passengers pass through the airport as well, “Our TSA lines are not long, and the boarding areas are very close. While we don’t have jetways here, the walk to the plane is very minimal. And the weather here is good.” Meaning, departures and landings are simple and quick.

Chris Morello seconds her colleague’s opinion. What she wants people to know about Monterey Regional Airport is that “we aren’t so small that you wouldn’t want to consider us as a travel option. A lot of times, when people think regional, they think of very small operations with limited travel options. We fly to Phoenix, San Diego, San Francisco, Las Vegas, and Los Angeles. We have great connections, and I think that makes us very competitive for people who may want to come to the peninsula.”

As the region continues to grow, so too will its visitor count. According to Morello, the airport remains on mission: “From new housing developments sprouting throughout the county, to multi-million-dollar renovation investments by local hotels and resorts, the growth and vitality of Monterey County is booming.  So the Airport continues to dialogue with airline associates to attract more commercial services and opportunities for passengers to funnel through gateway cities when Monterey is their destination.”

Check out this handpicked feature on Haldiman County, Ontario – A grand experience.

WHO: The Monterey Regional Airport

WHAT: A small, non-hub, regional airport 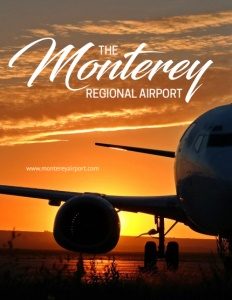