June 2016Past IssuesSupply Chain and Logistics

A standout in its realm

The Saint Louis University Office of Sustainability and Benchmarking manages and measures the sustainability initiatives and programs at Saint Louis University (SLU), a private, research university with campuses in St. Louis, Missouri and Madrid, Spain. As part of the Saint Louis campus Division of Facilities Services, the Office identifies, prioritizes, coordinates, and tracks campus sustainability efforts which may include, but are not limited to, recycling programs, waste reduction, alternative transportation, and energy initiatives. It works very closely with the school’s Center for Sustainability, which awards graduate degrees in Sustainability, Urban Planning and Development, and Geographic Information Science.

Brandon Verhoff is the Office’s Director. He explains that, as a Jesuit institution, Saint Louis University is committed to promulgating Jesuit values as they relate to caring for the natural world and the manifestations of creation. He quotes Initiative #5 of the school’s latest strategic plan: “We will apply the Jesuit concept of care for creation through our stewardship of the environment on our campus and in our community.”

“From the University’s strategic plan,” says Verhoff, “we will honor the environment, making sustainability and program needs a major consideration in all decisions concerning our facility, grounds, and use of resources. In Facilities Services, our new three-year strategic plan includes three initiatives, one of which is Environmental Stewardship with three action plans: energy and water strategies, a climate action plan, and the third is about educating our campus community about sustainability initiatives.”

Verhoff’s Office was only created three years ago. “Facilities Services recognized the need of the office on campus and the amazing things that we were already doing inside our facilities – how we should promote those and how we could do more,” he says. Facilities Services at SLU oversees all campus construction, maintenance, custodial, grounds, mail, real estate, parking, transportation, and distribution services. These units work together in creating a more sustainable University. “My Office is kind of a hybrid,” Verhoff avers. “Not only am I overseeing sustainability on campus, but I oversee the benchmarking inside of Facilities Services. And then, I also am responsible for strategic planning for our division. Combined, this provides an advantage to integrate these areas, together.”

One of the Saint Louis University Office of Sustainability and Benchmarking Office’s many sustainable initiatives is the Green Billiken Certification Program, which encourages students, faculty, and staff to complete various action items that promote sustainability. After completing the program, they earn points toward certification by doing such things as using reusable water and food containers, planning and delivering a class presentation on recycling, calculating their carbon footprint, promoting a sustainability event on campus, etc. Prizes are awarded for each 50 point increment achieved.

Another program is called SLU Energy Madness. “It’s a competition among the residence halls to see which hall can reduce more energy,” says Verhoff. “It’s a bracket style – kind of like March Madness. Whoever wins the last round gets to go to the next round. To further promote the program, we include energy ambassadors in each of these residence halls. They’re drumming up support, giving tips and information, turning off lights, and doing those things that reduce energy usage.” The University’s two energy suppliers, Ameren Missouri, the area’s electricity supplier, and Laclede Gas read the residence halls’ meters at the completion of each round and forward the information to Verhoff. “Ameren is sponsoring energy ambassador first, second, and third place winners of the competition by providing a box seat for the students to go to a St. Louis Cardinals game,” he adds.

Regarding the school’s physical plant, Verhoff reports that, last summer, SLU installed nine solar arrays on nine different campus buildings. “They’re each 25 KW and produce approximately 30,900 kWh annually” he says. “They offset the equivalent of 191 metric tons of carbon dioxide annually.” The school partnered with Ameren’s solar incentive program, which helped defray the project’s costs. In addition, two new residence halls, which are currently under construction, one to open in the fall, are being built to LEED Silver standards. “Highlights of the project include LED lights and a bio-retention area to collect storm water from the roofs,” Verhoff says. Overall, the campus is striving to reduce its energy and water consumption by 20 percent by 2020.

Verhoff says that SLU also wants to increase its waste diversion rate to 30 percent. His Office and other units around campus are working towards this goal. For example, Ground Services placed recycling bins for exterior use and put them in strategic locations throughout the campus in 2012, Custodial Services updated signage on all interior bins this past year, and Aramark implemented a pre-consumer composting program in the dining halls. Students have also been implementing their own initiatives and programs. “There is a specific committee underneath our student government association that focuses on wellness,” says Verhoff. “This past year they purchased re-usable water bottles for every single student. The year before, they used their money to put in water bottle filling stations – about 30 of them around campus. And because of that, last year, we saved nearly one million water bottles from going into the landfill.”

Verhoff see these actions as not only preventing waste, but also fulfilling one of the most important tenets of the Jesuit ethos: that of social responsibility. “When we’re talking about sustainability, of course, it encompasses not only the stewardship of the environment but the social implications as well,” he explains. “And because we’re a Jesuit institution, our students are very passionate about the social justice component. For example, they are taking on the issue of disposable water bottles – they would like to eliminate disposable water bottles on campus, but it’s not just about the elimination of a waste product. It’s also about the privatization of our water system; how large companies are going into small towns and pumping out water from the aquifers. It’s affecting small communities, not just in the U.S. but around the world. Recognizing the social justice impact they can have by using a reusable bottle and filling water from the tap is what drives them and connects them to sustainability.”

Saint Louis University is a STARS (Sustainability Tracking Assessment Rating System) Silver-rated institution as evaluated under the AASHE’s (Association for the Advancement of Sustainability in Higher Education). SLU’s first submission, in October 2011, earned the university a bronze rating. Due to all of the campus’s successful programs over the ensuing years, in February 2015, the school achieved its first silver rating. “We’re excited about that because we’re really trying to increase all of the various sustainability aspects of our campus,” Verhoff says. SLU also ranked 100th in the Sierra Club’s Top 100 Greenest American Universities in 2015 – up from 149th place the year before.

“Due to the dedication by our Grounds staff, we’re also Tree Campus USA certified,” he adds. Tree Campus USA is a program created by the Arbor Day Foundation to recognize and honor college and university campuses that effectively manage trees and engage students. “We’re passionate about our trees on campus because they’re important for a number of reasons: they provide oxygen, they filter drinking water, they cool surface temperature, they reduce climate change, they save energy, they reduce crime, and they increase the local economy,” Verhoff says.

“We’re also trying to focus on making our grounds more sustainable,” he continues. “One of the exciting things that Grounds, the Center for Sustainability, and my office are going to start working on is bringing more pollinator plants to campus. There is a problem in the world, right now, with the eradication of bees. So, we want to try to create an environment on campus where bees can have more pollinators and be more active. There’s a research program in the Center for Sustainability that focuses on urban bee pollinator plants. We are partnering with them in order to support this important issue on our campus. They’re also searching other urban locations, but because we are an urban location, we can create a living laboratory right here.”

Doing it right and doing it here are just two of the many characteristics that make SLU, Facilities Services, and the Office of Sustainability and Benchmarking a standouts in the realm of campus sustainability.

Check out this handpicked feature on Furman University Center for Sustainability.

WHO: Saint Louis University Office of Sustainability and Benchmarking

WHAT: An office of SLU’s Division of Facilities Services 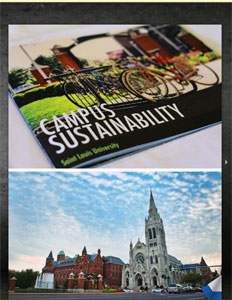