One Project. One Vendor.

Mark Juelich concedes that American Warehouse Systems is not the only company capable of supplying the various individual elements of a comprehensive material handling and storage system.

But when it comes to taking the process from A to Z – and under the exacting standards expected of a prime contractor to the federal government – the chairman/CEO isn’t shy to point out the separation.
“If you’re talking about someone who can do a pallet rack job for the government or someone that can do a mezzanine for the government or someone that can do bits and pieces, there are a lot of companies out there,” he said. “But when you look at our core – designing and implementing the giant systems in the government distribution centers – there isn’t anybody out there that does it.”

Roughly 95 percent of the work that American Warehouse Systems does is in conjunction with the federal government, Juelich said, a split which has necessitated the company’s seal of approval from both the General Services Administration and the Small Business Administration. The other 5 percent of revenue, he said, comes from various commercial customers across myriad industries.

The government projects most typically involve design of distribution centers or storage facilities, followed by the integration of equipment and installation of products. The value-adds beyond typical providers, Juelich said, come from in-house capabilities that include concrete and electrical, heating, ventilation and air conditioning and fire-suppression services – all on one project contract.

The company has five long-term government agreements – four of which run for 20 years and account for the bulk of overall American Warehouse Systems business. Renewals or extensions come every five years, he said, though each document comes with its own distinct terms and conditions.

The company was created in 2003, after Juelich had already spent years in the government contracting business as sales and marketing director for another entity, JTD Industrial Supply.

The previous experience made him aware of the niche that existed, and the reality that a lot of companies qualified to fill it weren’t enamored with the idea of extra regulation and paperwork. He was an executive director with American Warehouse Systems from 2003 through 2011, then took over the entire operation when he purchased the company and became chairman and chief executive.

The current workforce includes 25 people, and the company operates out of half of a 12,000 square-foot space that’s actually owned by another company that Juelich runs.

Yet another division, American Warehouse Supplies, serves as an online material handling store.

American Warehouse Systems is one of five subsidiary companies to the parent operation, and functions on a worldwide basis thanks to its governmental relationship.

“We do projects all over the world. Wherever they need us to go,” Juelich said. “In fact, business has been pretty good in Afghanistan of late. I don’t go, but we have guys that just love going over there.”
Governmental organizations typically prefer to mete out their project contracts in one sizable chunk, he said, rather than parsing the work out to several specific vendors.

As a result, the American Systems Warehouse model was set up specifically for that approach.

“They prefer to work with one company that can do the whole thing,” Juelich said.

“We basically run our projects like a general contractor would, and that’s a big difference from many material handling distributors. They sell supplies and then install those supplies. When we approach a project, we have to do it basically as a general contractor – because we have so many different components, like the HVAC, the fire suppression, the electrical systems and such.”

The contract tweaking/adjusting process is 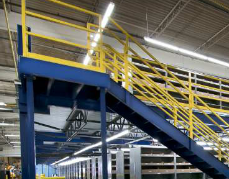 perpetual, as is the search for new contracts – whether short or long term – a reality which puts heavy emphasis on the company’s ability to market itself.

American Warehouse Systems has emerged as a leader among material handling companies in that facet of the business, which, Juelich said, enables it to maintain a global reach and creates scenarios in which the government comes to them rather to fill jobs, rather than the company seeking work.

“We’re one of the few small distributors that actually has an entire marketing department,” he said. “We’re always looking at ways to advance our marketing strategies, especially Internet marketing and social media; that type of thing.”

And as for the future, some tweaks could also come to the manner in which business is done.

Check out this handpicked feature on Tennsco – Making Storage Easy. 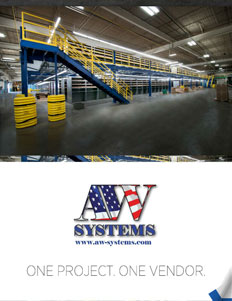