Progressive, Attractive, and Open for Business

Prescott Valley, Arizona is a high desert mountain town located about 60 miles south of Sedona and ten minutes from the City of Prescott, in the central part of the state. At 5,100 feet above sea level, the Town of Prescott Valley sits between the Bradshaw and Mingus Mountains. In the early 1900s, the area was homesteaded by the Fain family, whose descendants still live in the area. The town was founded in 1966 and incorporated in 1978 with a population of 1,520.

Over the last twenty years, the city has experienced enormous growth – from about 11,000 persons to its current population of over 45,000. “That was made possible because of decisions that were made by leadership,” explains Richard Parker, Prescott Valley’s Community Development Director. “First, to undertake the acquisition of a private water company, and then to facilitate the approval of a series of master development plans which have attracted the population necessary to create the third leg of the stool, so to speak, which is commercial development – which ultimately provides reoccurring revenue in the form of sales tax revenue. The town of Prescott Valley does not have a property tax, so we live or die by sales tax revenue.”

While the town of Prescott Valley may “live or die” by its sales tax revenue, the people of Prescott Valley must rely on a sufficient amount of water for their continued survival. And according to Parker, “the town has really done a good job in making available future water supplies for additional development. The State of Arizona has the most stringent water law in the U.S.,” he adds. “There is a requirement for a subdivider to demonstrate that it has a one hundred-year assured supply of water. That means that they have the right to use it and they have an ability to deliver that water.”

“Prescott Valley is in an area called an ‘active water management area,’” Parker continues. “There are many throughout the State of Arizona. The Prescott active water management area was the only one created by the state that was not in a groundwater mining condition when it was created. However, by 1999, we were pulling more water, as a region, out of the ground than was naturally replenished to the aquifer.” Since then, the town has ramped up its efforts to recharge water back into the aquifer and, by doing so, it qualifies for water credits from the state; it’s envisioned as “new water” because it comes from reclamation. The private entity that owns the town’s water rights can then utilize those credits for future subdivisions.

John Munderloh, Prescott Valley’s Water Resources Manager, elaborates: “There’s a misperception that we’re a dry state without water,” he states. “But, in fact, we manage our water supplies for the driest decade, and make sure that we can make economic development decisions throughout the area without being concerned about running out of water. The water providers, such as the town of Prescott Valley, work in concert with the regulatory agencies, like the Arizona Department of Water Resources, to ensure that we have one hundred-year water supplies before any growth is allowed. So, businesses and subdivisions are assured of their water supplies very far into the future and don’t have to worry about running out. Water security doesn’t have to be a part of their business decisions – water supplies are essentially guaranteed.”

“Within our groundwater basin, we use no more water than we did in the 1960s,” Munderloh continues. “And that is because of our water management structure. In Prescott Valley, we pump the same amount of water that we did back in 2003, even though the Town has grown by about 50 percent since then.  We also reclaim about 65 percent of the water we serve through the wastewater collection system where we treat it to a high degree and then recharge it underground into vacant space above the water table. The Arizona Department of Water Resources recognizes that volume of recharged water as a water right that can be used for future growth.”

Prescott Valley was the first jurisdiction ever to sell its effluent water rights at a public auction, and Munderloh says the deal was structured in such a unique way that the town received international acclaim from Global Water Intelligence, a world leader for primary research information on international water markets. “We were quite proud that we were able to go to London and be recognized with other worldwide water leaders,” he says. “We took a second-place award and were happy with that for our little town in Arizona. From the perspective of water, the town of Prescott Valley has met and exceeded the highest standards in water resource management anywhere in the country. We’ve accomplished water security for our community far into the future.”

With its water supplies secure, Prescott Valley has continued to increase in population. And because it has been able to attract both new residents, as well as a vibrant retail sector, its revenues have grown accordingly. “We have one of the larger retail destinations in northern Arizona,” says Parker. “And we’ve seen our retail sales tax go up exponentially over the period of time that I’ve been here. Previously, the town depended a great deal on residential development and sales tax coming from the completion of new homes. But the leadership here has done a really good job in moving away from those single-source revenues which occur when you buy a house. You get the revenue from that sales tax one time, as opposed to retail sales tax, which is the gift that keeps on giving. So, the community worked hard to try and attract that retail.”

Part of that attraction scheme, according to Parker, is Prescott Valley’s rapid approval processes for new businesses that want to locate their operations in town. “We are very customer-oriented from that standpoint,” he declares. “We move things through very quickly. We have very clear processes that are predictable and positive, so people like doing business with Prescott Valley because we are able to quickly get to the common denominator called ‘yes.’” He recounts a recent situation when the town released a building permit to the Home Depot Corporation in a mere five days. “Had we not been able to do that, and give that certainty to proceed, we wouldn’t have a Home Depot cranking sales tax into our coffers,” he exclaims. “When you’re investing in a community, you want some certainty. The more certainty you have in that investment, the more apt you’re going to be to want to invest in that community.”

With its wide open spaces, its clear mountain air, its mild, year-round climate, its cultural, recreational, and educational activities, its superior public services, its shopping amenities, and its affordable housing, all combined with a secure supply of water for years into the future, it’s no wonder that Prescott Valley, Arizona is often ranked as one of the top places to live in America.

Ameritas has a long history of giving back to the communities in which it serves. By volunteering their time, talent and expertise, company associates make a difference by serving on local community boards and participating in fundraising efforts, to impacting young lives through mentoring programs and extending a helpful hand to those in need. This spirit of volunteerism at Ameritas is symbolic of the company’s commitment to “fulfilling life.” 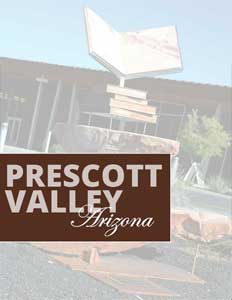