Kalmar RT Center – A Vital Part of your logistics

Kalmar RT Center’s business model is to go where others cannot.

The Texas-based operation is a manufacturer of specialized rough terrain (hence, the RT) material handling equipment, and supplies its signature products — the RT240 Rough Terrain Reach Stacker and RT022 Rough Terrain Telehandler — to companies primarily operating in oil and gas, construction, remote logistics, intermodal logistics, mining and forestry industries, in addition to governments.
Kalmar RT Center has a workforce of 166 employees and its facility is housed in five buildings spread across 13.6 acres in Cibolo – a city of 15,000 about 25 miles northeast of San Antonio.

“We’re very, very proud of the employee workforce that we have,” said Steve Speakes, Kalmar RT Center’s president and CEO since 2013, after a 35-year stint in the U.S. Army during which he rose to the rank of lieutenant general. “This is a great area. We have incredibly hard workers, people who’ve got enormous growth potential and who take enormous pride in the company.”

The Texas location is one segment of a larger Swedish company that itself is a subsidiary of Cargotec, a Finnish entity recognized globally as a leader in cargo and load handling.

At the end of 2014, Kalmar had more than 5,200 employees in 30 countries – including the United States, Malaysia, Sweden, China, Finland, Poland, Spain, India and the Netherlands – with a composite offering that consists of cargo handling equipment, automation, software and services.

A second RTCH contract with the U.S. Department of Defense arrived in 2008, and the burgeoning Cibolo campus now consists of 49,245 square feet of manufacturing space, 27,206 square feet for paint, service and repair, a 37,000 square-foot parts warehouse, a 32,000 square-foot research and product development building and a 30,000 square-foot customer support center.

“We started initially, right after the start of war, resetting or rebuilding RT240s – a 56,000-pound capacity rough terrain container handler, known as ‘The Big Wretch,’” Speakes said, “and from then until about 2009 our business was rebuilding the wretches that came back from war.

“In 2009, we actually began to produce, here in the United States, the RT240, which has been our flagship system since we started and was our main product up and through 2013.”

Kalmar RT completed its series of Army contracts and began retooling its business model in 2014, Speakes said, a transition that included start-up production of small and medium-sized forklifts and a redirection toward commercial work, in addition to reconfiguring its government offerings.

The RT240 is still sold worldwide, either for military forces or in rough-terrain functions like mining. The company’s medium forklift is sold to various commercial entities throughout the Americas and the small rough-terrain model is purchased primarily by the Department of Defense.

A driver going forward could be fracking, or hydraulic fracturing – a well-stimulation technique in which rock is fractured by a hydraulically pressurized liquid made of water, sand and chemicals.

On-site tests of the RT240s effectiveness at well locations are ongoing, and verification of the effectiveness of the model will hasten a full-scale plunge into the fracking business, Speakes said.

Alongside, Kalmar RT is working with a Canadian firm that specializes in rough-terrain Arctic mining.

“We’re the only game in town, from the standpoint of quality, true rough-terrain capability and the ability then to handle containerized solutions,” he said. “There are others who are pretenders, but we’re the only one who really is able to occupy the space.”

B
ecause Kalmar RT was particularly successful within the demanding contracting mandates of the military – a common product produced in predictable numbers – Speakes is confident the company can transfer that exacting expertise into the “new world” of commercial production schemes.

Commercially, he said, every product is customized to some extent, whether by color or attachments, and customers will also have myriad ordering and delivery timelines.

“They’re going to put unique demands on us and expect us to be able to be flexible and agile and make things on demand,” he said. “That’s the huge evolution that’s gone on here. It’s been reflected in our warehousing and supply operation, which obviously have to be deeper and more flexible.

“All of this, then combined with very different timelines between ordering and delivery have made us a much more agile and learner company that what we were before.”

In terms of infrastructure, the parent company provided capability to reengineer the workforce in terms of variety of jobs and definition of jobs, along with new business IT systems to accommodate the complexity of order and delivery – all while sustaining long-established standards for quality.

“It was a major project,” Speakes said. “We didn’t leave our comfort zone out of choice, we moved out of necessity. The military market as we knew it had dried up and gone, and we had to change or we would not survive. We knew that. It’s been an enormous ordeal, and now we think we’re ready to explode in a new burst of growth in both the commercial and military markets.”

Five years from now, he said, the transition will be second nature.

“I see us continuing to be a hybrid company,” Speakes said. “We’re going to continue to support DoD, but we’re not going to rely on DoD. We’re going to be deep into the commercial space. I see us making more products that will be designed, built and assembled out of Cibolo, but I also see us essentially executing Kalmar’s global strategy, which is to dominate the Americas.” 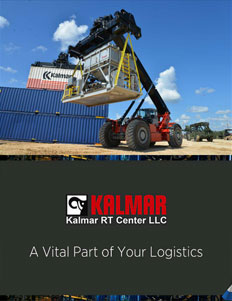