For 120 years, the County of Simcoe, Ontario has been in the business of providing services for its senior citizens. Jane Sinclair is Simcoe County’s General Manager of Health and Emergency Services, charged with overseeing the county’s portfolio of senior service properties and operations. She is effusive in her praise for the County’s long term commitment to its senior population: “This County has been extremely supportive of senior services for many, many years,” she says.

For example, while all municipalities in the province are required to own and operate one long-term care home, today, the County owns and operates four long-term care homes with a total of 541 care beds, in addition to a diverse range of housing and other support services for seniors.
The County’s portfolio of long-term care residences and seniors housing options include the following facilities:

Sunset Manor opened as a residential facility in 1969, on 8.56 acres of land in the town of Collingwood. It was officially designated as a long-term care facility in 1993. In 1997, Sunset Manor was extensively redeveloped and its resident, staff, and community outreach services were significantly enhanced. Today, it provides accommodation, support services, and personal care service for 148 permanent, and 2 short-stay residents.

Next to the Manor is Sunset Village, a three-story, 40 suite, life lease housing project for seniors that opened 1997. Life lease is an innovative new option for adult seniors who want to own property in a seniors community without having to worry about its maintenance. Sinclair explains: “Life lease is a very successful model across the country. In fact it is very similar to a condominium style purchase. Owners purchase their unit with a 99-year lease. They own the actual unit, and if they choose to sell it, down the road, they can sell it like they’d sell a condominium or a private dwelling. But we’re responsible for the grounds maintenance, the buildings’ maintenance, etc.” Residents must pay a monthly occupancy fee, but they get to use all of the building’s common facilities.

Simcoe Manor is located on the site of the original House of Refuge that was opened by the County in Beeton, Ontario in 1898, “to provide accommodation, support and supervision for citizens of any age whose social or medical problems made it difficult for them to reside in their respective communities.” In 1952, a 47 bed care wing was added to the original building and its name was changed to Simcoe Manor Home for the Aged. In 1973, the original House was demolished and replaced with a three-level structure. In 1992, a major redevelopment of the property resulted in its current 126 bed, long-term care, formulation.
Simcoe Village is a 32 unit apartment building on the same grounds as Simcoe Manor. It is a supportive housing complex for seniors who have some difficulty living in their current place of residence due to decreased physical and/or mental capabilities, but do not need the full services of a Home for the Aged. “It’s independent living but it does provide some support services so they can maintain their independence and their health,” says Sinclair.

Trillium Manor was built by the Ladies Orange Benevolent Association, Ontario West in 1969. The Orillia, Ontario facility was originally called the Trillium Home for the Aged. It was purchased by the County of Simcoe in 1989, and redeveloped and expanded between 1994 and 1996. Today, the long-term care home contains 122 beds, with a special care unit for the cognitively impaired.

Georgian Manor was first established in 1957, when the County of Simcoe purchased and renovated a building that was being vacated by the Penetanguishene General Hospital. New additions to the original building were added in 1961 and 1971, with another retrofit in 1990. In the early 2000s, the County determined that yet another upgrade would be less cost-efficient than building a brand new home. So the new Georgian Manor, a state-of-the-art long-term care facility with 143 long-term care beds, was built as part of the new Georgian Village complex. It re-opened in 2013.

Georgian Village – Georgian Village is an innovative concept in senior housing and services. According to Sinclair, it’s “actually a pretty new model, and in terms of municipalities, we’re probably the leading edge.” Georgian Village is a community built on a 20.7 acre site in Penetanguishene. It is fully owned by Simcoe County and offers a wide range of housing options for seniors, aged 60 and above, who may have different healthcare and service requirements, but who all want to live in a senior community that provides choices that match their preferences and needs. “As people get older and their needs change, they don’t have to move,” explains Sinclair. “They can continue to live in this community setting and obtain whatever services or assistance they need to stay healthy and independent.”

Georgian Village incorporates six different senior housing models:
Georgian Manor Long-Term Care Home has 138 long-term care beds, and five convalescent beds. According to Sinclair, the convalescent beds are a new level of service called “Convalescent Care.” Convalescent Care is provided for short stays that are focused on rehabilitation. “They’re primarily for seniors that have had some type of surgery, for example, and they need some more intensive rehabilitation. They don’t need to be in the hospital, but it’s more than they could get if they were back in the community, in their home, so it’s kind of a short stop. They get the support so they’re able to get back into their home.”

Georgian Residences consists of 42 Assisted Living rental apartments. Its tenants are able to maintain their personal independence while also receiving specialized attention to their needs. Assisted Living residents can enjoy an outdoor patio, central dining, spa and shower rooms if support is needed, amenity spaces, and all community programs and services of the Georgian Village Center.

Life Lease Garden Homes are 17 single-story, 2 bedroom units that are bought by their owners. In addition, there are 40 Life Lease Apartment Suites on the Georgian Village Campus for seniors who don’t want, or can’t afford, a single family house. Georgian Terraces is an affordable housing complex that contains 40 apartment units. Rent charges are approximately 80 percent of the average market rate, and are available to seniors whose income qualify them for this type of subsidized, social housing.

In addition, all Georgian Village residents, regardless of what type of housing they inhabit, have access to the Georgian Rendezvous and Village Center. The Rendezvous is the central gathering spot for the entire community and offers a variety of social and recreational spaces. “The Rendezvous houses anything that you’d see in a community center – a restaurant, a pharmacy, a convenience store, a hair salon, a hearing clinic, a wellness clinic with a family health team, a nurse practitioner, and a host of other amenities, including a library, a community greenhouse, a woodworking shop, and a fitness center. And we’re building a therapeutic pool and spa area. We’ve really tried to pack as much into this campus as we can to promote the whole aging in place model – it’s kind of one-stop shopping.” The Village also hosts paved walking and cycling paths, bocce ball and shuffleboard courts, and putting greens. “We’ve tried to build into the campus most of the things that you or I would if we were living in our own home,” says Sinclair.

Sinclair sees the partnerships that Georgian Village makes as key to its ongoing mission to provide the highest level of services to its senior population. For example, she is working with the town so that they can bring local senior groups to the site to utilize its amenities. A partnership with nearby Georgian College has resulted in a Registered Practical Nurse satellite program being instituted on campus. In 2014, the County received the prestigious Peter J. Marshall Award for its Georgian Village Redevelopment project. The Award recognizes “those municipal governments demonstrating excellence in the use of innovative approaches to improve capital and/or operating efficiency, and to generate effectiveness through alternative service delivery initiatives and partnerships.”

Sinclair believes that the Georgian Village model will soon become more and more common as the Baby Boom Generation ages, fomenting an increase in the need for more senior housing and services. And, indeed, there is growing interest in the concept across Canada and elsewhere. “This is innovation at its best. This is about thinking outside the box and creating new ways to deliver service that better meets current and future needs of our residents,” says Sinclair. “And it’s not only awesome for the seniors but it really helps support our whole health care system, because if you can put the services in place and build these mini-communities, you’re going to keep your seniors more well, so that they’re not getting critically ill and requiring 911 and ending up in emergency rooms in hospitals, so it really is fulfilling a lot of needs.”
The Georgian Village complex was ten years in the making. But now that it’s been established, Sinclair and the County of Simcoe are planning ahead for the next several years. They recently received funding to develop a long-term “senior strategy” with far-reaching implications: “We’re going to be developing a framework that will not only be used for the county of Simcoe, but we will be partnering with all the local municipalities to see how we can collectively support seniors across the county. That will be a very formalized plan and we literally will be looking at every type of service that we provide; everything from our roads, infrastructure, transportation, to paramedic services to all the various types of social services to see what are the priorities for the seniors population. We want to develop this framework so as we go forward with the planning, whether it’s developments or different types of services, we have this framework to refer to, so that we can build in those priorities to all of our future planning needs. We’re very excited about it. It will really help us plan over the next ten or twenty years how to better serve the seniors population.”

According to Sinclair, the County of Simcoe’s mission is clear and forthright: “We’re here to serve. That’s our mandate, plain and simple. We’re here to provide the best level and the most appropriate level of service that we possibly can. And I think our Council is very progressive in that they foster that and they encourage us to look at new ways of doing things.”

Simcoe County may have been providing its senior services for over a century, but this is one municipality that continues to stay very much ahead of the curve.

WHO: County of Simcoe Senior Services
WHAT: Owner and operator of senior housing options, including long-term care, and assisted and independent living.
WHERE: Simcoe County, Ontario, Canada
WEBSITE: www.county.simcoe.on.ca 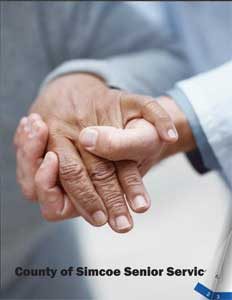