A great place to live and work

Carol Stream is a village in DuPage County, Illinois, approximately 35 miles west of Chicago. It was incorporated in 1959, and although there are a few small waterways that run thought the town, there is, in fact, no stream named Carol, there. Carol is actually the name of the daughter of the community’s founder, Jay Stream, and the village was named after her.
Jay Stream was a businessman who ran a local construction company. The story goes that at one time he became frustrated with the red tape involved when attempting to negotiate a planned subdivision in nearby Naperville and when a town clerk told him to “build your own town,” he decided to do just that. In 1957, he began buying up farmland outside Wheaton.
Jay Stream’s vision for Carol Stream included a community comprised of residential homes in the western part of town and light industrial businesses in the east. Today, Stream’s ideal village is home to approximately 41,000 residents and 900 businesses, including several Fortune 500 companies, such as Mercedes Ben of North America, Office Depot, UPS, Frito-Lay, and ITW-Trans-Tech, among others. Thousands of Carol Stream residents work in the local commercial, industrial, and retail sectors. In 2011, CNN’s Money Magazine ranked Carol Stream number 49 on its list of the 100 Best Places to Live in America.

The town boasts modern schools, a park system with 38 parks and playgrounds, an outdoor water park, two recreations centers, sports fields, a full service library, two gymnasiums, a mini-golf course, and biking, equestrian, and nature trails. And because of its strong industrial and commercial base, Carol Stream’s residents can take advantage of a full array of these and other municipal services without having to pay a local property tax.

In 1998, its Town Center was completed. This award-winning public development includes pedestrian walkways, landscaped reflecting ponds, a fountain display, a 22,000 square foot grass amphitheater, and a 30 foot diameter Octagon Pavilion which serves as the community’s performing arts venue. Every summer the town hosts weekly, outdoor concerts there, as well as a spectacular July 4th celebration. In 2011, when budget constraints threatened the annual summer concert series, local corporate sponsors and civic groups stepped up to salvage the popular community tradition.

According to Jim Knudsen, the city’s Engineering Services Director, “Carol stream is a great place to live and work.” Knudsen’s Engineering Services Department consists of engineers, inspectors and administrative staff. They oversee new development, and all utility, infrastructure, and street reconstruction projects. The Department is also responsible for inspections, and residential, commercial, and industrial permits.

Knudsen elaborates on the advantages of living in Carol Stream, especially regarding the work of his department: “We’re well-run, financially, and we put a large importance on maintaining our infrastructure; we’re very proactive. All our streets are evaluated to make sure that the proper maintenance strategy is being applied so that those streets can last 45-50 years. In fact, our studies show that on a scale of zero to one hundred, they’re rated approximately at 82 – that’s what we call our pavement condition index. We do a lot of investigative work on our water and sanitary sewers to find distresses in those systems to lower our risk of water main breaks and sanitary sewer blockages. We have several storm water management projects that have been done in the village that have lessened the amount of flooding. So, from the engineering and public works side of it, we would say that the village infrastructure is being properly maintained.”

In fact, the city has five, ten, and twenty-year Capital

Improvement Projects (CIPs) on the books, which are all financed by surpluses in the general corporate operating fund. Other city operations are funded by its share of state sales and income taxes, the village sales tax, and permit fees and fines. Recent completed projects have included extensive street resurfacing and rehabilitation, a total replacement of a storm water lift station, and a trail bridge reconstruction.

Carol Stream is also justly proud of its ongoing commitment to “green” its operations, and has been recognized for its sustainability efforts by DuPage County, Commonwealth Edison, the DuPage Conservation Foundation, and the Illinois Recycling Association. Within the last several years, the village has re-lamped all of its facilities with energy efficient lighting, installed LED parking lot lighting, expanded its residential curbside recycling program, and redesigned its snow plowing program to reduce the use of road and car-damaging salt.

Part of Jay Stream’s vision was to create a sustainable and self-sufficient community that would break the Chicago commuter syndrome and create employment opportunities for its residents, without having to leave town. As the Village of Carol Stream embarks on its next 50 years, it’s entirely possible that with its mix of residences and businesses, its committed local civic groups, its forward-thinking citizens, its supportive corporations, and its innovative government-sponsored initiatives, it just might move up several notches on the Best Places to Live in America list.

WHO: The Village of Carol Stream
WHAT: A village in DuPage County, Illinois
WHERE: About 35 miles west of Chicago
WEBSITE: www.carolstream.org 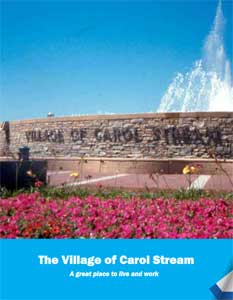