Well-known as the birthplace of American poet, Emily Dickinson, Amherst, Massachusetts, a town of 37,000 in the west central part of the state, is also home to the University of Massachusetts, Amherst College, and Hampshire College, three schools that, in addition to being the area’s major employers, help define Amherst’s personality as a highly educated, politically active, and socially conscious community.

“But,” according to Peter Hechenbleikner, Amherst’s Acting Town Manager, “there is a town here, besides all that.” And he is quick to add that one of the other things that differentiates Amherst from many other communities in the U.S. is that this town of clearly defined villages – North Amherst, South Amherst, Atkins, and East Amherst, all with their own commercial centers, plus a very vibrant downtown – is its built-in aversion to sprawl. “We actually have purchased either development rights to farmland, or outright purchased a lot of the open land. That gives Amherst its character,” he says. “It tries to funnel development into those villages and the downtown. So, we’re not building huge sewer lines through farm fields because we don’t want the farm fields developed; we’re not providing infrastructure to them, but the village centers all have full infrastructure, as does downtown, and the universities.”

Regarding those infrastructure projects, Hechenbleikner recites the town’s latest list of ongoing developments: “We have full public sewer and water supply throughout the community and we continually improve and enhance those in a couple of different ways,” he reports. “We’re putting in for approval at a town meeting, this fall, for $2.1 million for water line improvements – primarily replacement of water lines, rather than extending water lines into new areas. We’re asking for $3 million for new sewers in a developed, residential area that does not have sewers and needs them.”

“We are looking at a substantial investment from our Community Preservation Act Fund for affordable housing, historic preservation, recreation improvement, and open-space acquisition,” he continues. “That’s a little bit over $2 million. Other public infrastructure that’s in the pipeline is a new, 750-student elementary school. We’re taking an existing school, building onto it, then knocking the existing one down and replacing that, so it’s sort of two elementary schools on one site.” Other projects include the expansion and renovation of the town’s public library, construction of a new central fire station, and construction of a new public works facility. “Those are ambitious projects,” Hechenbleikner says. “We don’t have the funding all in place for all of them, but those are our infrastructure needs, right now.”

Hechenbleikner explains that the elementary school is a $60 million project, half of which will be paid for by the Commonwealth of Massachusetts and the other half by the taxpayers of Amherst. “The library is a $20 million project, about half paid by the Commonwealth and the other half paid by the town,” he adds, “which may mean fundraising by the library, and the remainder of it through the tax rate. The fire station and the public works facility are likely to be entirely taxpayer-funded. By taxpayer funded, I mean bonded. All of these will be bonded – the local share – with the debt service paid for through the tax rate.

“In addition to those things, we’re doing our annual six to eight hundred thousand dollars a year of road improvements. One of our downtown parking lots is under construction, right now. We’re doing a major project in downtown to put utility lines underground. That’s a $1.5 MassWorks Infrastructure Program grant. The other thing that we’re doing, which I think is really interesting, is that we have contracts for a solar farm on our so-called ‘old’ landfill and our so-called ‘new ‘landfill – neither of which is a landfill, anymore. We’re not using them as landfills, but those are very significant projects that we hope to bring about late this year or mid-next year. So, we’re always looking to improve the community in a way that’s acceptable to the community and that supports our master development plans.”

In downtown, Amherst’s first mixed-use development building was just completed this past winter. “It’s about 34 housing units and commercial development on the first floor,” Hechenbleikner says. Geoff Kravitz, the town’s new Economic Development Director, adds that the tenant of that new development is the Mass Mutual Insurance Company, one of western Massachusetts’s major employers. “They have the entire first floor of that mixed-use building for their innovative data lab,” he says. “It’s their first innovation office that’s outside of Springfield. They have about 25 to 35 employees there and they’re hoping to grow that to about 100.”

In addition, the presence of the three well-regarded schools is hardly overlooked by the town’s administrators. “UMass is doing some great things in sustainability,” Hechenbleikner says. “They just developed a solar farm over one of their parking lots. Hampshire College, which is on the southern end of town, just opened and dedicated its first ‘living building,” one of only ten in the world, and there is a second one planned for the Hitchcock Center. They also have solar farms that they’re developing on the site. So, in addition to a very sustainable development pattern that Amherst has for itself, it’s a very sustainable community with alternative energy all over the place.”

According to Hechenbleikner, Amherst also practices its social responsibilities by being very supportive of affordable housing. “About 12 percent of our housing units are affordable housing, which is a fairly large number for Massachusetts,” he says. “It’s hard to get affordable housing in an expensive state like this, but we’re making very good progress. Sometimes, it’s one or two units at a time, and sometimes it’s bigger. But we continue to make progress.”

While Amherst may be considered a “college town,” Hechenbleikner believes that the town also possesses its own identity and has a “distinctive sense of place. It’s pretty clear to me that it is the center of the western part of Massachusetts,” he exults. “Springfield is the biggest center in terms of a city, but I think when you look at what’s happening in western Massachusetts, it’s really happening around Amherst. We have some very interesting cultural facilities including art galleries, the Emily Dickenson House, a downtown movie theater, restaurants, and museums at all three colleges which add to the cultural center that we have.” In fact, the Massachusetts Cultural Council recently designated the downtown area as a “Cultural District.”
Kravitz believes that another unique aspect of Amherst is the fact that the town actually created the position of Economic Development Director, less than a year ago. “And for a western Massachusetts town the size of Amherst,” he says, “I don’t know if there are any other towns our size that have this. And I think it’s a recognition from the community that development needs to be done in a thoughtful way; that it should be somebody’s primary job and not added to other peoples’ responsibilities.”

Amherst, Massachusetts may be over 250 years old, but this is one town that not only has a great respect for its history, but just as importantly, is clearly focused on where it’s going, next.

Check out this handpicked feature on Saskatoon, Saskatchewan – Growth and opportunity. 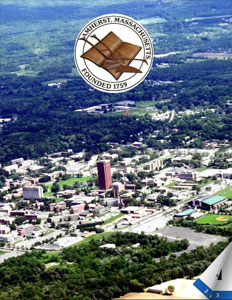