Home of the Padres

Petco Park, located in downtown San Diego, California, is the home playing field of the San Diego Padres of Major League Baseball. The stadium opened in 2004 and is named after the San Diego-based pet supplies retailer, Petco, which maintains naming rights through 2024. The Park’s construction costs of over $450 million were partially funded by the Center City Development Corporation, the San Diego Redevelopment Agency, the ownership of the Padres, and municipal bonds repaid by hotel taxes.

Petco Park was intended to be part of a comprehensive plan to revitalize San Diego’s aging downtown, and, from the beginning, to be an active partner in the community. “When we campaigned for a new ballpark back in 1998, the goal for the proposed was to be more than a ballpark,” says Mark Guglielmo, Senior Vice President & General Manager of Ballpark Operations. “We wanted the ballpark to be a community asset; a place where people could gather, have a great time, socialize, and come together. And, to this day, we create an entertainment venue which hosts a variety of events that appeal to the San Diego community. We designed the ballpark in such a way that bringing together a community and creating these memorable experiences would be paramount.”

So, in addition to the Padre’s 81-game home season from April through September, the Park is host to a lot of non-baseball events. “That was part of the thought process,” Guglielmo continues. “Our franchise is considered a community asset; we want our venue to reflect that and we try to schedule as many events as possible. Our present ownership group, led by Ron Fowler and Peter Seidler, want to ensure that we live up the promises that were made in 1998, so we look for events and opportunities that can really galvanize a community, utilizing this venue as source of community pride. We’ve had rugby sevens; we have target golf; we’ve had the U.S. Davis Tennis match between the U.S.A. and England; we’ve had college basketball; we have corporate events; we have concerts.”

One of Petco Park’s signature assets is its “Park at the Park.” “It’s located north of the seating bowl, and on a game day, people can buy a park pass and watch the game sitting on a grassy berm with a view into the ballpark,” says Guglielmo. “And we also have a video board that they can watch the game from, as well. But when there’s not an event, the park is open to the public, and it’s a great opportunity for people to come to the downtown area, experience an urban setting that has a tremendous green space, have their lunch. . . they can even watch our groundskeeping staff get ready for a game.”

Although a relatively new stadium, Guglielmo reports that over $50 million have been invested into Park upgrades and improvements over the past few years, “in an effort to ensure that it’s in the top echelon of sports venues,” he states. “About $40 million of that is in capital projects, and another $10 million for deferred maintenance. The capital projects include a state-of-the-art, HD video board, which is the largest in the National League and the third largest in Major League Baseball behind Seattle and Kansas City. We also installed a new Sony HD control room that includes in-house production, BrightCast entertainment systems, state-of-the-art LED ribbon boards, and a new Daktronics Audio system. We also installed new LED sports lighting that was from Musco. We were the first team in the National League to install LED lighting and the second team, overall, in Major League Baseball. We have retrofitted 100 percent of the ballpark to all LED lighting.

“In addition to those projects, we’ve also created some unique group social spaces. We renovated an area in center field and created a two-tiered deck that imitates a boardwalk found along San Diego’s beaches – we call it the ‘Sun Diego Pier.’ We created another large group space underneath our left field video board for about 300 people. We’ve also constructed a Padres Hall of Fame, which opened up in July of last year, right before the All-Star Game. It’s part of our ongoing effort to tell the story of the club’s history, as well as baseball in San Diego. It’s a state-of-the-art experience that features an in depth timeline, memorabilia, video, and other interactive, multimedia elements. So, we look for opportunities to create more group spaces, more communal spaces, based on our demographics and based on how our fan base prefers to enjoy Padres baseball and Petco Park.”

At Petco Park, there are few “down days.” “I would say our off-season is busier than our regular baseball season,” Guglielmo admits. “We continue to schedule non-baseball events between October and the start of the upcoming season. We have great weather; we’re located in a downtown, urban environment surrounded by the convention center, hotels, restaurants, so it’s a great opportunity for us to capture a large audience on a year-round basis.

“For example, once our season ends in September, we have a partnership with Callaway and we convert the ballpark into a nine-hole golf course for target golf, and we’ll do that for a week and a half, followed by several corporate events down on the playing field. This fall, we scheduled several instructional games with our minor league teams. So, we have a lot going on, including internal sales events to either to reward existing season ticket members or to try to capture new ones. In November, we host a large charity event called ‘Padres Pedal The Cause,’ which is two days of bike racing throughout San Diego County that starts and finishes at Petco Park. We also book the traditional off-road ‘dirt’ events in mid-January and early February. So, our schedule during the off-season is very constant as it relates to non-baseball events.”

Guglielmo says that scheduling events during the baseball season is doable but has its challenges: “When we go through the planning process, as it relates to the baseball field, we ask ourselves, ‘Can we return the field in such a way that it’s safe and playable and aesthetically pleasing?’ And the first two criteria – player safety and playability are first and foremost. If we can’t do that, we won’t schedule the event. But if we feel confident and ensure that we can provide a field that is both safe and playable, then we’ll consider those events. Recently, Metallica played here in August, between home stands. We have an excellent grounds crew that is proficient at maintaining our field. We had a window of ten days in which we were able to schedule the concert, and once the concert ended and loaded out, we re-sodded a portion of our outfield and got it back to baseball-ready.”

Guglielmo adds that during the offseason is generally when all capital projects, and any major deferred or preventative maintenance is performed. “During the 2017 offseason, we’re scheduling a solar project for the ballpark,” he reports. “We’ll be installing solar panels on top of our rooftop canopy that will equate to approximately 330 kilowatts of power. We’re always looking for opportunities where we can manage this facility in a very energy-efficient fashion.”

“In addition, since we opened up the ball park in 2004, we implemented a very elaborate waste diversion program in which we recycle all our plastic, aluminum, and paper products. We also do e-waste and we recycle our cooking oil. We have a very ambitious green waste process whenever we re-sod our playing field; we donate the old sod to golf courses or parks to allow those entities to repurpose the used sod.”

All of these amenities, improvements, and upgrades have likely contributed to Petco Park being named the Number One Ballpark in America by USA Today, this past summer. In fact, the only thing that one can say is lacking at the stadium is a championship baseball team. In franchise history, the Padres have only won two NL pennants – in 1984 and 1998 – and they’ve never won a World Series.

But baseball people are ever hopeful, as players, fans, and owners alike always look to next spring to begin anew. “Our ownership group is really focused on providing a team that is championship caliber and that will have a strong presence in post-season play,” Guglielmo declares. “We hope that will begin in 2019 or 2020. Last year, they invested close to $100 million in the amateur draft and international signings, and are focused on building this organization at a grass roots level through our minor league system and player development, and we hope to bear the fruit of that work sooner or later.”

Meanwhile, Petco Park will continue to be an event-filled, public asset for the greater San Diego Community. And, no doubt, the Padres will “get ‘em next year.”

Check out this handpicked feature on Shore Solutions – Mission ready.

WHAT: The home playing field of the San Diego Padres of Major League Baseball

The Queen Elizabeth Hospital – A new... 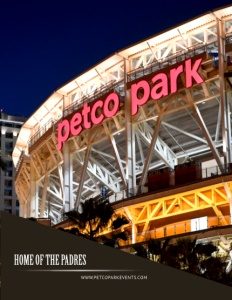