When the RBC Convention Centre Winnipeg (formerly Winnipeg Convention Centre) opened its doors in 1975, it was the first “purpose built” convention centre of its kind in Canada. And what a statement it made! At the time, the venue featured an 80,000-sq.-ft. exhibition hall, 80,000 square feet of meeting space on three levels, and 700 parking stalls in an underground parkade.

Fast forward to the 1990s – space in the facility was maxing out and expansion was definitely in order. Klaus Lahr, current President & CEO of RBC Convention Centre Winnipeg, explains, “In the 20-plus years we’d been in operation, 17 convention centres had come on the market and we needed more space to maintain our position in the marketplace.”

The expansion journey began in earnest and continued until March 2016. RBC Convention Centre Winnipeg is now the fourth largest, publicly-owned convention centre in Canada, behind only Toronto, Vancouver, and Montreal. The complex is 800,000 square feet in size, of which 500,000 square feet are revenue producing; the other 300,000 houses support facilities. While the federal, provincial, and municipal governments all participated in funding the expansion, the City of Winnipeg owns the Centre and contributed the lion’s share to the project.

Approximately 800 full-time, part-time, and casual employees work at the Convention Centre. Lahr says, “We’re a big employer in the city, hosting over 900 events per year. It’s a very busy place. I’ve been here since June 1, 1993, and I’ve seen a lot of change in the industry in those 25 years. I came from the hotel industry, and the convention centre industry was really lagging behind the hotel sector, technology-wise. In the ‘90s, convention centres were thin on IT. WiFi was unheard of, the internet was unknown. Imagine, in this day and age, operating without WiFi and a website, and not doing business online. In that area, humongous changes have happened.”

As part of the expansion, the Centre implemented state-of-the-art, high-speed internet and WiFi accessibility to all its clients free of charge which, for a short while, made them somewhat of an industry leader. Telus, a major telecom provider in Canada, is the Centre’s partner in that endeavor.

“We’re in a face-to-face industry,” says Lahr, “where you know the people you’re doing business with. You prospect the associations and connect with them, one on one. We have a very high return client base. We survey every client, and between 68 to 78 percent are return clients. Canadians make up 80 percent of our customers. The rest are international or American organizations that are part of an international body.”

The impressive RBC Convention Centre structure is divided at ground level by a city street, but the third floor is contiguous floor, and the second floor is a skywalk that connects the two buildings. A small, facility-based eatery serves delegates and meeting attendees onsite, and a plethora of neighborhood restaurants promises to satisfy every appetite. Accommodations are also plentiful. Lahr reports, “Within walking distance, we have 1,500 hotel rooms. There’s a Delta Hotel connected to our Centre by the skywalk, and an additional 300-room hotel is being built. We occupy two city blocks right downtown. We’re a 12-minute cab ride from the airport, and easily accessible by highway for cars and freight. Winnipeg is not a huge, congested metropolitan city, it’s very well laid out with good traffic flow.”

Winnipeg is in the midst of a building spree and the RBC Convention Centre expansion is a big part of downtown rejuvenation. A new hotel is going up a block to the north, along with a new True North Square featuring a 23-story office and residential tower, as well as a public square. According to Billboard Magazine, the Bell MTS Place (to the northeast) is one of North America’s busiest entertainment venues. There is also a new outlet shopping mall, and the nearby, newly-built, Canadian Museum for Human Rights.

The Centre’s business year is similar to a school year. It starts to get busy the first weekend in January and remains extremely busy into the first week of July. Most of the summer is relatively quiet, then business commences again at full speed right after Labor Day weekend until the week before Christmas.

Lahr has a tongue-in-cheek answer to the angst people have about the bitter weather in Winnipeg: “Cold winters are not unlike the summer heat in Arizona. In winter in Winnipeg you go from your heated house to your heated garage, drive your heated car to a heated parkade, take the elevator to your heated office, and at night you reverse the flow. Not unlike what you do with air conditioning in Phoenix in the summer. In other words, take your pick.”

As for competition, there are numerous hotels in the city with large banquet and meeting facilities, but the RBC Convention Centre is the only publicly-owned convention centre. The reason for expansion was to increase capacity, and now they’re working very hard on bookings. If 2016/2017 is any indication, they’ll be up to full capacity in just a few years. Lahr says that the rise in demand since the expansion is “unbelievable. We did not anticipate that demand would build this quick. Business is very brisk.”

Fads are prevalent in the meeting, convention and exhibition business. In the ‘90s, computer shows were big events that grew like flash fires and then disappeared. Now, it’s Comic Cons and Anime Cons that are trending – RBC Convention Centre has four Comic Con shows a year that attract from 12,000 to 35,000 attendees each.

Lahr notes that community involvement is important to the whole Convention Centre team. “We’re very much involved with non-profits such as soup kitchens and Habitat for Humanity, and many philanthropic organizations. We participate in, donate to, and volunteer at all kinds of fund-raising events. We have also established a close relationship with the Aboriginal community, and it works both ways. We’re proud to have Aboriginal art collections exhibited in the Centre for all to enjoy.”

To help maintain their highly-rated service reputation, the Convention Centre has engaged “guest experience management” experts from the Syer Hospitality Group. The Centre’s guest surveys consistently place satisfaction levels for customer service in the low to high 90s, but having spent over $180 million on an expansion – and going for more and bigger business – they refuse to let the quality of service suffer. Syer is training everyone – Lahr, the executive committee, department heads, supervisors, right down to the absolute front and heart of the house employees to provide a superior level of guest service.

From a green perspective, Lahr states, “Our expansion made us a LEED Certified Silver building, as far as the mechanics. On a day-to-day basis, we compost our food, recycle glass, paper, cardboard, and building materials, i.e. when we remodel we donate usable building materials to Habitat for Humanity to sell in their ReStores. We also embarked on a building program with Manitoba Hydro to replace all lightbulbs with LEDs. That is completed, and saves us over $100,000 per year on electric bills. So, we’re very proactive in that area. It’s an interesting field, just when you think you’ve done it all, it starts from scratch again.

“To sum it up, we are a major player of the downtown scene. A major employer in the downtown area. Our economic return to the City of Winnipeg is over $62 million per year. Our return customer base is very high, our satisfaction level is extremely high for the industry. We’re known for our quality of food and beverage and service. What else can I say? Except, there is always room for improvement.”

WHO: RBC Convention Centre
WHAT: A major meeting and convention facility
WHERE: Winnipeg, Manitoba
WEBSITE: www.wcc.mb.ca 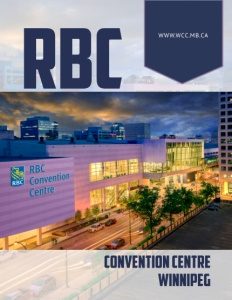