Business View Magazine interviews representatives from Allegany County, NY as part of our focus on sustainable practices in municipal government.

Allegany County, population, 47,000, lies in the southern tier of western New York State, just north of the Pennsylvania border. It is bisected by the Genesee River, which flows north to its mouth on Lake Ontario. In the early days of its settlement, the region’s tall forests provided cut timber and were a main source of the area’s economy. As the timber was removed from the lower hills, and the land laid bare, agriculture crept in, and it is this industry that is paramount in the County, today. At first, grain was the principal crop, followed by wool growing and cattle raising, as the Genesee Valley Canal and, later, the Erie and other railroads opened the way to more productive grain lands. Currently, the County’s economy is driven by dairy and mixed farming; apples do well, while the humble potato is one of its main products, next to milk and hay.

The discovery of a great oil pool beneath the surface of the County was perhaps the most momentous occasion in its history. In fact, the first petroleum in the United States was noted by Roche-d’Allion, a French Jesuit, in 1627, near the current town of Cuba. But it wasn’t until the coming of the famous Old Triangle No. 1 well drilled in nearby Allentown in 1879, that anything came of the priest’s find. Although the oil boom has long since passed, a fabulous amount of money came into the County in the late 1880s, and there were towns growing overnight. For fifteen years, the oil brought to the surface had more value than all the rest of the County’s products combined. It could not last, at least on the scale at which it had started, and, today, oil production occupies a minor part of Allegany County’s economy.

Though oil production is no longer prominent within the county, the production of energy continues in the 21st century in new forms, spurred on by the renewable energy programs at Allegany County’s three institutions of higher learning: Alfred State College, Alfred University, and Houghton College. 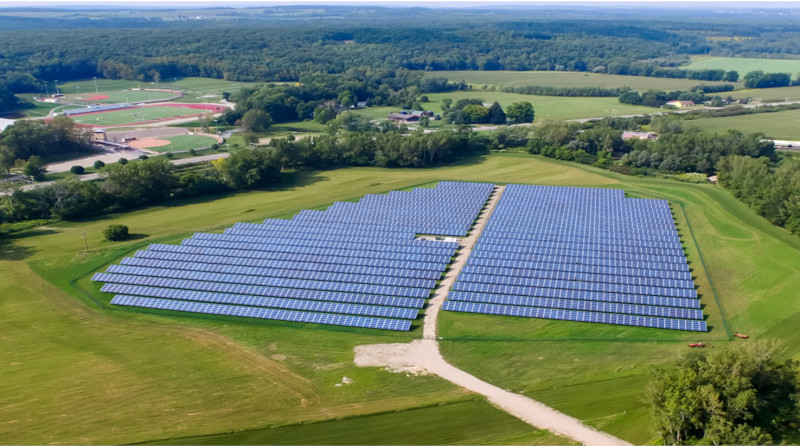 “As far as renewable energy goes, all three colleges have been pretty active for a number of years,” explains Craig Clark, the County’s Director of Economic Development. “In the 1990s, Alfred State College started doing solar installations programs, and, actually, had a very large NYSERDA (New York State Energy Research and Development Authority) training program that was one of the largest in the state. We have a 100 kW wind turbine installed at the campus and had a 10 kW on a farm, back in the ‘90s.”

“Alfred University and Alfred State College have participated in two Solar Decathalons, one in China in 2013, and the other one in California, in 2015,” Clark continues. “Both times, the colleges got together and built a house.” (The U.S. Department of Energy Solar Decathlon is a collegiate competition, comprised of 10 contests that challenge student teams to design and build highly efficient and innovative buildings powered by renewable energy. The winners are those teams that best blend design, and architectural and engineering excellence, with innovation, market potential, building efficiency, and smart energy production.) “So, we have a long history of being involved in renewable energy from the college perspective.”

In 2015, Houghton College completed a 2.6 MW solar project – “the largest solar array ever implemented on a New York college campus,” says Angela McKay, Assistant Director of Economic Development & Planning. “Since then, we had a few projects on the horizon. One is the Alle-Catt energy project – that’s a 380 MW wind farm that’s going to consist of 120 turbines. It’s a $500 million project and currently the biggest wind project being proposed in New York State; construction is planned for 2020, on the northwestern side of our County. We also have another solar energy project, called the Moraine Solar Energy Center – an 80 MW Solar Farm, with construction anticipated in 2021. That’s a $100 million project and that’s going to cover about 500 acres in the town of Burns in the northeastern side of Allegany County. We also have some smaller scale, community solar projects just starting to take off. One is in the community of Caneadea. The project being discussed is enough to power up to 20 homes. Small scale solar projects are also being discussed in other communities, including Wellsville and Friendship.”

Another renewable energy project in Allegany County is the SUNY (State University of New York) Alfred Biorefinery and Commercialization Center. “We’ve been working on that for about three or four years and we have state and federal resources to build it,” Clark reports. Just this month, New York State pledged $6.6 million for the Center, which provides the remaining funding to get the $14.2 million project off the ground. The project previously received about $6.1 through grants from Empire State Development, the state Dormitory Authority, the Appalachian Regional Commission, and the Federal Economic Development Administration. The accumulated funding will enable construction to begin on the biorefinery prototype, which could be operation in two years. The biorefinery will follow a patented hot water extraction process to separate chemical byproducts from low-grade wood, biomass crops, and agriculture residuals that come from local sources. End products of this process include ethanol, methanol, acetic acid, and wood that can be used in home heating, composite lumber, biodegradable plastic, and biofuels.

All of these renewable energy initiatives have been integrated into the third revision of Allegany County’s Comprehensive Plan, which is in the process of being finalized. “We’ve made the Economic Development chapter of our plan more robust and prominent to address our current development needs, as well as devoted more planning to sustaining our natural resources, addressing possible future issues of climate change, and developing strategies for integration of renewable energy sources,” McKay explains. 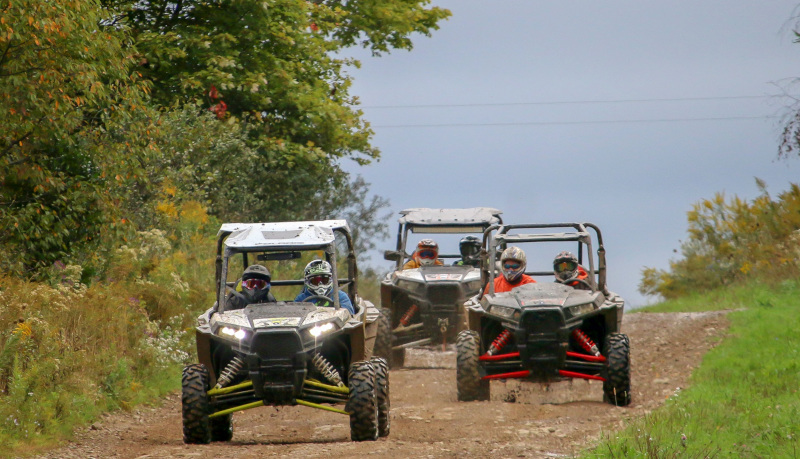 Meanwhile, the County is also hoping to grow its economy via other means. “We’ve been working with site selectors since 2016,” Clark notes. “They’ve visited the County three times and they’ve given us a pretty good profile on trying to expand what we already are doing a good job at, which is advanced manufacturing and ceramics, which is big at Alfred University, as well as some other areas, including food production. Another initiative we’ve been working on is tourism. We have a pretty active ATV park in the County, being as rural as we are, and we’re trying to use our natural resources to attract people with UTVs (Utility Terrain Vehicles) and ATVs (All Terrain Vehicles).”

In addition, Allegany County offers its visitors a wide array of outdoor activities, including large and small game hunting, fishing, kayaking, hiking, backpacking, skiing, birding, photography, canoeing, and swimming, as well as a full range of cultural activities, shopping, dining, and sightseeing. By embracing renewable energies and building on its traditional strengths of agriculture, manufacturing, and tourism, a sustainable future is in sight for Allegany County.

WHERE: The southern tier of western New York State 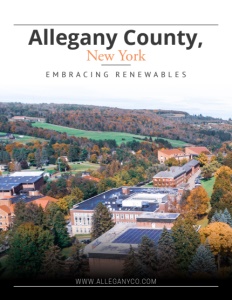