Business View Magazine interviews Matt Garten of Sutton-Garten Co., as part of our focus on best practices in the American manufacturing sector.

Recently, Business View Magazine spoke with Vice President, Matt Garten, now the fourth generation of Gartens in the welding supplies and gases business, about the history and growth of Sutton-Garten. Matt recounts that his great-grandfather, William Raymond “Ray” Garten, began his career in the welding department at the Prestolite Company in Speedway, Indiana. Prestolite manufactured acetylene lamps and lighting systems for cars and trucks, and was owned by Indianapolis industrial pioneers Carl Fisher and Jim Allison (also founders of the Indianapolis 500). Garten was responsible for training welders and lead burners. When Prestolite was sold to Union Carbide and Carbon’s Linde Division, Garten transferred to Chicago, where he met Charles R. Sutton in 1918. Together, they formed the Sutton-Garten Co., a business catering to servicing welding machines as well as supply distribution. 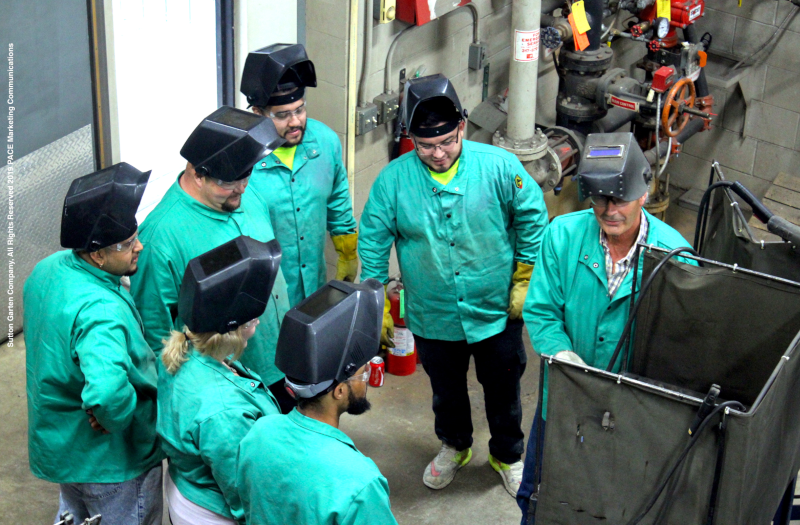 A class with Dave

Union Carbide decided to market product through distributors, and Sutton and Garten returned to Indianapolis to begin operations as the first independently-owned Prestolite distributor in Indiana. As Sutton-Garten Co., the company specialized in the sale of small acetylene cylinders and Prestolite lighting equipment. They also maintained a welding shop and did service and repair work. A large part of the early shop business was the installation of acetylene lamps and wind deflectors on early open-cab trucks.

In 1923, Ray Garten bought control of the company from Sutton, yet kept the Sutton-Garten name because, as Matt explains, he simply didn’t want to have to change the stationery. Ray’s wife Rena became Secretary/Treasurer of the company and was an important part of the operation for over 60 years. Business improved as welding gained a foothold in the industry; electric welders began to appear in the mid-1920s and further expanded the company’s product line. Sutton-Garten became the first General Electric distributor in the country in 1926.

The company expanded its operations to a new building in 1930. The shop area was enlarged and the repair business grew rapidly. It was also a way of introducing the new concept of welding repair to skeptical customers. An early offer to repair the touring Liberty Bell was unfortunately rejected, but many others saw the benefits of welding and ended up purchasing welders for their own operations.

During the 1930s, the supply business suffered due to the Depression, but the repair business continued to be strong. In fact, no one was laid off all through the Depression. By 1936, equipment sales picked up and the supply business grew rapidly. During World War II, the company helped train welders for jobs in the defense industry. By the late 1940s the shop business was only a minor part of the operation, and was discontinued in 1953.

William F. “Bill” Garten, son of Ray and Rena Garten, joined the company in 1938, and became President of the company in 1969. After his death in 1974, his son Pat joined the company and has managed the company since that time. In 1986, Sutton-Garten moved to a new headquarters and warehouse building, approximately twice the size of their former facility. The new building included a 2,000-sq.-ft. showroom, expanded dock facilities, demonstration area, and expanded offices. The company was recognized by the National Welding Supply Association as the oldest distributor in the United States under continuing management. 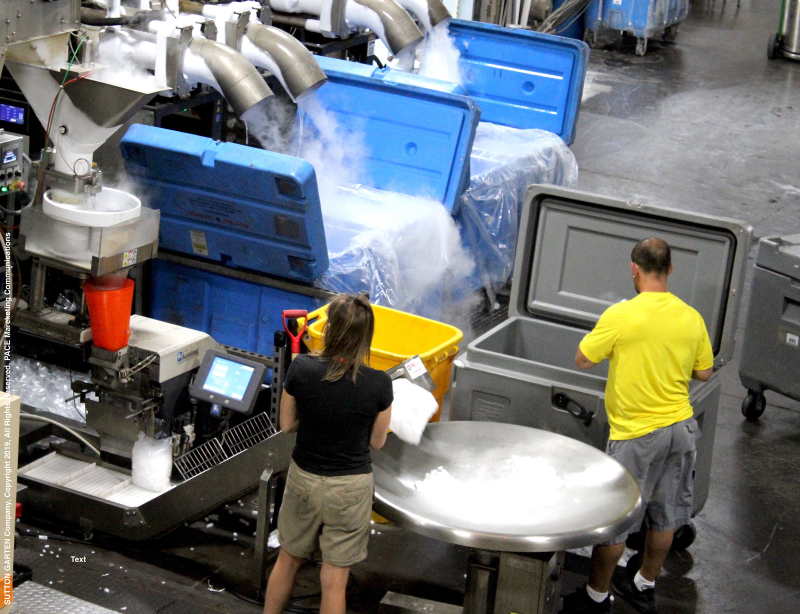 In 1997, the company installed an expanded cylinder filling operation, to fill on-site oxygen, argon, carbon dioxide, helium, nitrogen, and mixtures. In 1998, the repair and rental department was expanded to 5,000 sq. ft., and Sutton-Garten became a warranty repair facility for Miller Electric, Hypertherm Plasma, Lincoln Electric, and ESAB Welding. They also maintain a gas apparatus repair department and can service almost any brand of welding or cutting equipment.

In 2003, Sutton-Garten completed an 8,000-sq.-ft. addition to be used for additional warehouse space, rental and used equipment storage, and customer training. Ben and Matt Garten joined the company to become the fourth generation to work at the family-owned firm. In 2006, delivery of bulk liquid carbon dioxide to beverage and industrial customers began. Production of dry ice pellets for use in shipping and dry ice blasting applications began in 2008. They also expanded their welding training area and now offer welding classes and certifications. In 2007, Sutton-Garten was awarded the American Welding Society’s Image of Welding Award.

Leading up to their 100th anniversary year, additional carbon dioxide storage and dry ice production equipment was added.  A liquid nitrogen trailer was added to service nitrogen accounts, and dry ice blasting machines were added to the rental fleet.  Welding classes received a “Best of Indianapolis” Award. Dry ice production capacity grew with the addition of another pelletizer and a dry ice block press and the installation of a state of the art “Chillzilla” – a 50- ton bulk carbon dioxide tank.

Matt notes, “Having reached our company’s 100th anniversary year, we represent the finest suppliers in the industry. Sutton-Garten has a great team of dedicated employees who work hard and know that we are here to meet the needs of our customers. We’ve got 45 employees at our two locations in Indianapolis and Fort Wayne. As far as experience, we have a 15-plus-years average per employee. We try to be a one-stop shop for customers. From the welding supply industry to the CO2 bulk industry, we do our own installations, leak checks, and, of course, service. When you call our company, a real person answers the phone – there’s no call tree – and that’s a big deal to people.”

“We are an independent family-owned business and because of that we don’t have corporate rules and regulations in place so we can be flexible with the customers’ needs,” Matt continues. “We run everything based on service. If you don’t want to use us you don’t have to. The competition looks to sign you up for five to eight year agreement terms. We do not hold customers to contracts. As far as pricing goes, you get what you pay for. We can have the same pricing as our competitors and we don’t tend to be more expensive than our competition but customers are willing to pay more for service. We’re more service-oriented and our competition is more price-driven.

“Our primary business now is all service-oriented. We have welding machine repairs, we have a welding class, we do gas distribution, and welding supply distribution. We do bulk CO2 because of the growing need of the breweries and restaurants for CO2 beer gas and Guinness gas. We also supply a lot of nitrogen generators that we rent to breweries and taverns; that’s grown significantly. We have six bulk CO2 trucks for around 1,500 bulk CO2 accounts that we service – primarily restaurants and the food-grade industry. CO2 can be a solid, liquid, or gas. We deliver as a liquid and it pushes and carbonates as a gas for draft beers and sodas. You can also make dry ice with CO2 and we make a lot of dry ice here as well. We sell that as independent sales, for perishable shipping, and ice blasting applications. We have 160 tons of storage capacity on site.”

In going to market and finding customers, Matt says, “We work, locally, with the Indiana Restaurant Association as well as the Indiana Brewers Guild. We look to cater to independently owned and operated franchises. In the gas industry, the supply always has to outweigh the demand; you always have to be ahead of the ball in regard to supply and demand. The CO2 industry – because of the up-and-coming cannabis market, the brewing industry, the growth of restaurants and bars – you always have to be on the lookout for putting the horse before the cart.”

Among Matt’s most important objectives between now and 2024 would be to become even more service-oriented, catering to the industries that don’t focus on hard goods, but are more focused on consumables. “Because of e-commerce and hard goods, the margins in those industries are fading away,” he reports. “The gas industry is here to stay, though, and there’s always going to be a service need for that. It’s not something you can order online. In 2024, I would hope that on the gas side of our business we have significant growth.”

“I am proud of the history of the company over a hundred years, of being a family-owned business,” Matt says, in conclusion. “We have weathered the storms, from the Great Depression and wars, through increasing regulation and competition, molding the business through the needs of the customers, through the creativity of our employees, the strong loyalty of our customers, and strong support from our vendor organizations.”

WHAT: A provider of welding and cutting equipment, supplies, and gases

Chart Inc.’s Beverage Carbonation Systems are a safe and reliable substitute for high pressure cylinders.  Our complete beverage solutions have proven to reduce the risk of costly run-outs, allowing you to focus on spending more time with your customers.  Our bulk CO2 and LN2 systems provide a wide range of high capacity, high flow rate beverage grade CO2 and LN2 for establishments from the smallest brew pub to full scale breweries.