There are nearly 40,000 gyms or fitness centers in the United States, so choosing the right one to cater to one’s needs may take some shopping around. One of the newest and most unique facilities on the scene is Colorado-based Core Progression, a franchise operation that offers total body wellness in a boutique-style studio, combining customized personal and semi-private training with group classes, wellness providers, and retail products. At Core Progression, clients receive unparalleled results-driven training, nutritional education, and preventative services from chiropractors and physical and massage therapists at an affordable price, so everyone can experience a healthier, more fulfilling lifestyle. 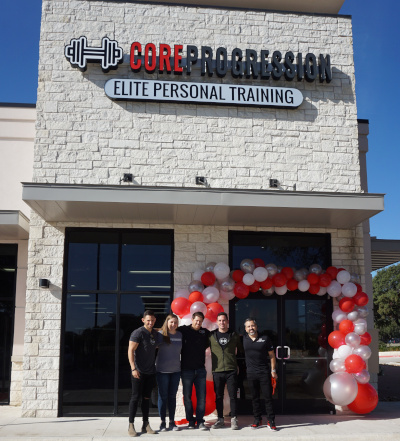 Core Progression was founded by Jonathan Cerf, who grew up in a suburb of Denver and planned to go to medical school after graduating from Baylor University. After he was put on a waiting list, he found a job working as a trainer at a local gym. He soon realized that changing people’s lives through health and wellness was still his calling, but that helping them in a preventive manner, via exercise and diet, as opposed to a prescriptive manner, via medicine, was the way he wanted to go. “My family was shocked when I walked away from the medical route,” he recounts, “but I realized that personal training was the path for me.”

In 2008, Cerf opened his business in a rented facility, and two years later, in his first tiny studio. It was a live/work space with retail on the main floor and apartments on the second and third. Cerf lived above the studio and, in the beginning, he was there 24/7. After three months, the business was doing well enough to expand into the building next door, followed by relocation to a 5,000-sq.-ft. space a year later. In 2012, the West Arvada location, north of Denver, was opened and continued to expand, as the company’s business models and systems were honed and refined. In 2016, Cerf purchased his first commercial building – an old bank building in Northglenn. After a massive renovation, it’s now the state-of-the-art Core Progression headquarters. Another facility opened in Olde Town Arvada, soon thereafter.

In 2017, Cerf launched Core Progression’s franchise model, and today, in addition to its three corporate locations, the company has a total of 15 franchises, three of which are in Colorado – Boulder, Lakewood, and downtown Denver. “And then we have Colorado Springs and Longmont in the works, and probably, before the end of this year, we’ll be adding at least two more to our Colorado market,” Cerf reports. “We also opened in Austin, Texas, and we are working on Las Vegas, where we have three territories and we’re working on opening the first one. We have Laguna Beach in California and we’re working on getting that one open. We also have Wilmington and Raleigh in North Carolina. They are all franchise operations. So, we went from two franchises to 15 franchises and three corporate. And, right now, we have 11 more territories in development.”

The model for Core Progression’s franchise business is based on trainer-centric wellness, primarily focused on personal training, semi-private training, and group classes. Each facility also partners with physical therapy, chiropractic, and massage services. Cerf explains, “Coming from a medical background, for me, taking the total body approach is the best methodology for us to use; meaning that if your biomechanics or alignment are off, you need to see a chiropractor and have structural work done before trying to hit squats; or seeing a physical therapist for issues like a torn rotator cuff. Having those services, in-house, has been a great value-add for the model, as opposed to just being another gym that has personal training.”

In addition, Core Progression doesn’t offer traditional memberships, per se. It’s a private atmosphere and people can’t work out without a trainer or a group class instructor. Typical personal training clients are 60 percent female, 40 percent male, with an average age of 43. Everyone is welcome. The company trains over 200 youth athletes per week and is contracted to train high school football teams over the summer. Core Progression has been the official trainer for many sports teams, cheerleaders, beauty pageants, and bodybuilding competitions. Not being pigeon-holed to one type of demographic allows flexibility if market or economic conditions change.

The average client spends $350 per month for personal training and group classes. Core Progression offers month-to-month, three-month, six-month, nine-month, 12-month, and 18-month payment options – the longer the commitment, the lower the price. Cerf believes that with today’s retail landscape changing, people are interested in experiences. “That’s where we want to give them the best customer service. At Core Progression, you’re not walking into a crowded gym where you feel self-conscious. People like to come to our facilities because everything is tailored to them. We have nutrition software that will learn people’s eating habits, and they work with a coach that’s there to help them. It’s a very custom approach to fitness. And our group classes have only 8 to 10 people per instructor, whereas big name facilities have 30 to 50 in a group.” 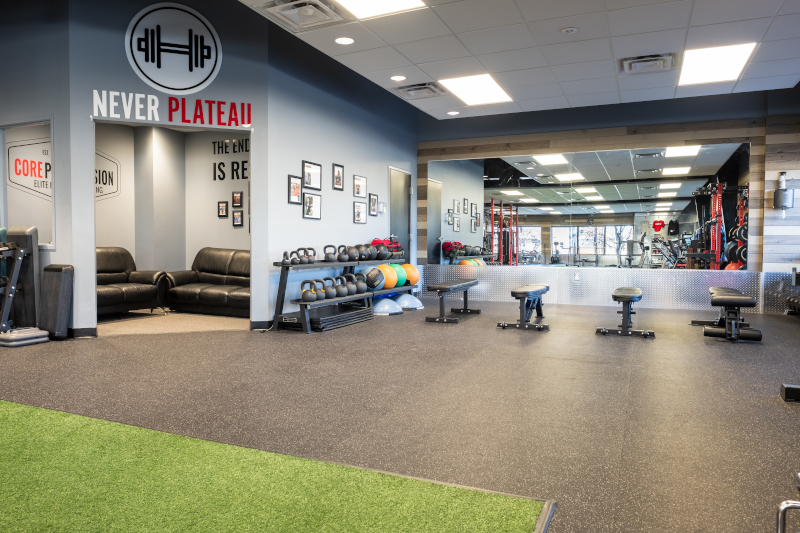 Any massage therapists and personal trainers are independent contractors; clients pay Core Progression and the service is contracted out. Physical therapists and chiropractors operate under a lease arrangement, having their own business and treatment rooms within the Core Progression business, while being able to build collaborative in-house networks and referral systems with the overall goal of making clients healthy.

“The only employees are the managers,” says Cerf. “Rather than hiring 15 people to start, you hire a manager, who can even be the owner/operator. That’s how I started. Then you just contract out the training sessions and services. You don’t really need an administration staff; the amazing new software we have allows one manager to run the entire business from their I-Pad – track all the memberships, the billing, the waiver forms – you can keep tabs on everything pretty simply. Also, we have a proprietary app that is a huge value-add to our clients. People can get information on nutrition, and their online workouts across gym challenges; it pairs with their tracker devices such as Apple watch or Fitbit.”

“We’re constantly trying to stay on the cutting edge of everything,” Cerf adds. “We now have an app that allows us to be a lot more forward facing with clients all over the country and not necessarily in your immediate geographical area, or if you have somebody who moves. It allows us to still keep that ‘stickiness.’ We’ve also added some new Core Progression member cards. They’re metal, as opposed to most fitness facilities that have a plastic key fob. They’re almost like a Visa Black card.”

“At Core Progression, we provide a clear and smooth path to better health and fitness,” says Cerf in conclusion. “Our cutting-edge facilities are clean, well-maintained, and welcoming. Our revolutionary personal training program welcomes and caters to men and women, little league teams, college students, professional athletes, bodybuilders, and retirees. Included in our science-based training, we offer nutrition plans, monthly body fat testing, performance tracking, and personal accountability. We cap our facilities at 200 members, which creates a bit more exclusivity. Most gyms try to make money on the people that don’t come; we want to make money on the people that do come because we actually help them.”

WHAT: Personal training and wellness facility

WHERE: Headquarters in Northglenn, Colorado

Thirteen Top Picks for the Most “TERRORific”...