Not just a rural community

Business View Magazine interviews representatives from Londonderry, New Hampshire, as part of our focus on economic development in American cities.

Londonderry, a town in western Rockingham County, New Hampshire, dates from 1719, when a group of Irish immigrants visited the area, then called Nutfield, and decided it would be a good site for a community. Three years later, in June 1722, the Nutfield area was incorporated as a township and renamed Londonderry after the city in Ireland from which most of the settlers had come. Apple trees were brought to Londonderry by those first settlers, and by the early 1800s, apples became the major crop of many local farms. In addition, the use of flax for making cloth, which had started in Ireland, also came to America, and eventually, linen making became the basic industry of the town. In fact, Londonderry linen is claimed to have been worn by both George Washington and Thomas Jefferson, as the product made there was considered to be the best in New England.

Today, the population of Londonderry is a little over 26,000, and even though the town still retains much of its rural character, with four working apple orchards within its borders, it is a fast-growing community that is quickly adding commercial, retail,  residential, and industrial development to its outer rim. Town Manager, Kevin Smith talks about some of the town’s ongoing, development projects. “The first is called Woodmont Commons,” he begins. “It’s a 603-acre, planned unit development that was formerly all apple orchards and was rezoned after a three-year master planning process, to mixed use. There’s commercial, retail, and residential in all different forms – apartments, town houses, single families. It has a 20-year build out, estimated between a billion and billion-and-a-half dollars, when all is said and done. It’s currently the largest development in the State of New Hampshire, if not New England. It’s really the first of its kind in this area. You generally see more of these planned unit developments in southern communities, so for New England, it’s really unique. I also think it speaks to the needs of both Millennials and retirees, who want to work and shop close to where they’re living.” 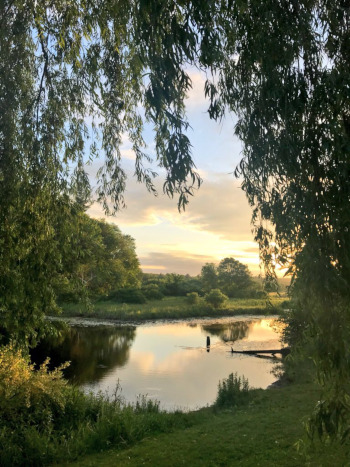 Town Planner, Colleen Mailloux, agrees that the Woodmont Commons project is unique for the town. “Normally in the planning side of things, we look at a site plan and we’re talking about, maybe one building, maybe two buildings on a lot,” she explains. “At Woodmont Commons, we’ve got an approved Phase One site plan by the Planning Board that has 38 buildings, 200,000 square feet of commercial and office space, and 250 residential dwelling units; it’s also approved for small hotels of about 130 rooms. So, it was an interesting challenge for us, reviewing and getting through the approval process. Some of the buildings in that project are currently under construction and are expecting certificates of occupancy later on this spring. And they’re moving on with the next buildings in that Phase One. So, they’re really creating a downtown, mixed-use, commercial corridor, and then building out from that, townhouse and single family residential, and trying to blend that development into the community, as a whole. And, as they have buildings under construction, there are also additional phases coming in and under review and constantly undergoing approval.”

Another ongoing project in town is the redevelopment of the Apple Tree Mall, an 1980s strip mall that had been in disrepair for some time, after having gone into foreclosure and losing many of its tenants.  Last July, it was purchased by developer George Vernet, owner of Vernet Properties of Salem, Massachusetts. “He’s put a lot of work into the mall,” says Smith. “He put in a new parking lot, fixed the roof, changed the façade – really giving it a big face lift so that it becomes attractive again. Part of the reason why someone would want to invest in a mall like that in Londonderry is because we’re a fast-growing community with a lot of new development coming in and so, it was advantageous for him to take advantage of that.”

A third ongoing project concerns commercial and industrial development near the Manchester-Boston Regional Airport, which sits in the Town of Londonderry and is the largest airport in New Hampshire. “There’s a significant amount of land around the airport that is developable and has recently started to ‘take’ in the last three to five years,” says Smith. “We’ve had close to two million square feet of new development, mostly distribution warehouses by some pretty big companies – Pratt & Whitney, UPS, FedEx, F.W. Webb, Electronics for Imaging, and Milton Caterpillar have all built facilities in this area. It’s got great access to the airport, obviously, and it’s got great highway and interstate access, too. So, that’s been a major industrial development in the north section of town.”

“The airport area, I call the Pettengill Road area, was driven by extending and creating the roadway network,” Mailloux adds. “A few years back, the State of New Hampshire created the Raymond Wieczorek Drive access road, which gave access to the airport and really opened up that area for industrial development. So, what we’re seeing now is the result of a lot of town infrastructure investment and state investment that has now created some more opportunities for the town. It’s also important to note that Londonderry has been able to do this by many years of thoughtful planning by both of our predecessors and realizing that, while it’s important to have commercial development and to see growth on that side of the town, and to provide a benefit to our residents by offsetting their tax impact, we’ve also been able to maintain our rural character and protect and preserve the residential corridor in the core of town – not only the orchards, but also conserved green space and open space.”

Smith agrees that even though most people still view Londonderry as a rural, residential community, a significant portion of its tax base is commercial and industrial.  “You have major employers like Stoneyfield Yogurt, which is owned by a French corporation, Lactalis; there’s the Coca-Cola Bottling Company; Harvey Windows; Electronics for Imaging, a California-based ink manufacturer; and L3 Warrior Systems, which is a defense contractor that manufactures night vision goggles. So, there are quite a few employers in town. The largest tax payer is a company called Calpine that has a gas-fired power plant that came to town in the early 2000s. It’s actually the state’s second largest power plant; the only one larger is the Seabrook nuclear power plant. They’re valued at about half a billion dollars, so they pay close to ten percent of the tax base in Londonderry.”

That tax base has certainly helped the town’s infrastructure projects move along. “We appropriate over a million dollars a year for roadway maintenance, and we have a good program of getting to the roadways that are in worse shape than others, each year,” Smith maintains. “Also, we have municipal sewer in most of our commercial corridors that we’re continuously maintaining or replacing.  We undertook about a $1.5 million project of putting sewer in one of our busy commercial areas this past winter and spring that was previously on septic.”

Londonderry also is moving along with its sustainable agenda. “A number of years ago, we undertook a program to change all of our lighting – the street lights, as well as all of the lights in our municipal buildings, to LED. It actually earned the town some recognition from green energy groups in the state. The other thing that we’ve recently done is we’ve entered into an agreement with a company called Granite Apollo to build what will be the state’s largest solar array on one of our current brownfield sites. It was a Superfund site that’s been cleaned up; there will never be any development that will occur on the site because of the environmental issues, but, that being said, we did get approval to put a pretty large solar array on that particular site. The company, itself, hasn’t gone through the planning board yet, but we do have an agreement with them that, at such time when they’re ready to start building, they’ll be going on that site.”

Going forward, Mailloux puts her stamp of approval on that type of relationship between the town and the business community. “I think the town prides itself on being business-friendly and helping folks through the development process. So, if there is a business or developer who is looking to do work in the town of Londonderry, while we do have high standards, and we want to see development done right, we do have a good process to go through and a good team in terms of the economic development and planning side of things,” she says. “And that’s something that we’ve really come a long way with over the last several years.”

“I think Londonderry, despite all of its commercial and industrial development, has still maintained its small town feel,” Smith is quick to point out. “We still have four working apple farms in the town, which brings in thousands of tourists, every fall. The town planners have laid out the town so that the commercial corridors go in a loop on the outskirts of the community. In the center of town, you’ve got farms that are still family-owned, so the town has done a really good job of keeping its rural character within the center of town. Also, Londonderry has almost 2,000 acres of land tied up in conservation that will never be developed. So, if you’re looking for a community that’s got all of the amenities of a larger city with shopping and restaurants, ease of travel, and you can work here, but at the same time, a place where you can go hiking in the woods and not see any industry at all, you have it all right here in this town.”

WHERE: In western Rockingham County

Manchester-Boston Regional Airport is conveniently located in the heart of New England, less than an hour from the region’s most popular recreational activities. MHT is served by the top four US airlines Southwest, American, Delta, and United with non-stop service to twelve US cities and one stop to the world.