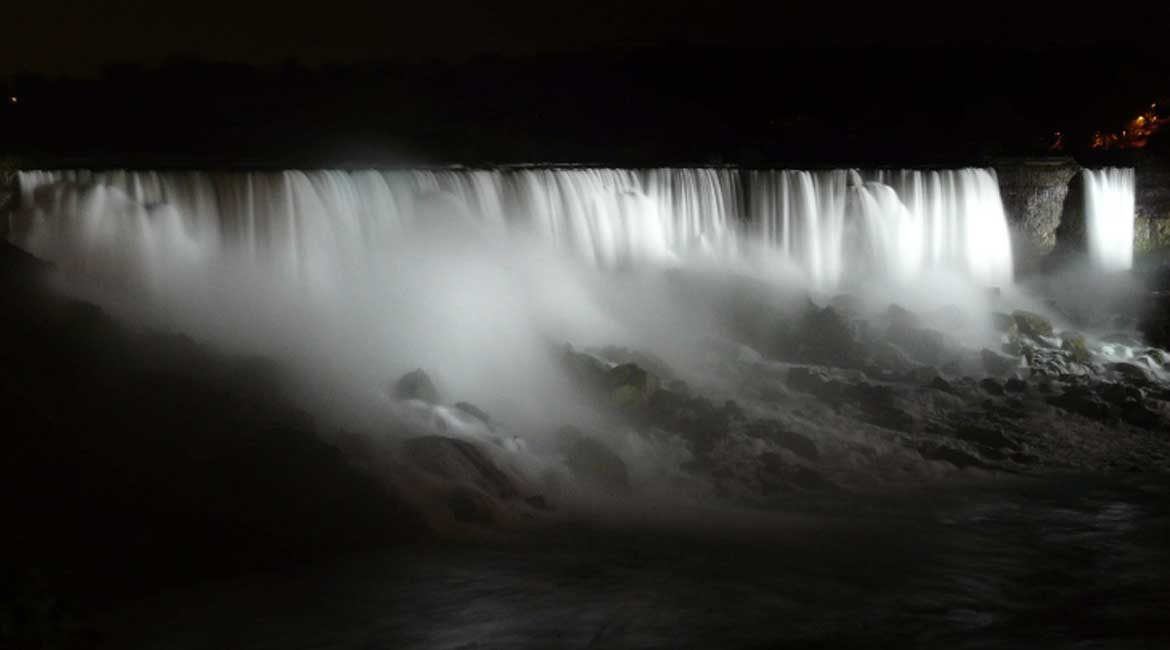 Located on the Niagara River, which drains Lake Erie into Lake Ontario, are three waterfalls that straddle the international border between Canada and the United States – the Horseshoe Falls, the American Falls, and the Bridal Veil Falls. Collectively known as Niagara Falls, these three cascades combine to form the highest flow rate of any waterfall in the world that has a vertical drop of more than 165 feet.

The  Niagara Falls were formed during the last ice age – about 100,000 years ago – when glaciers receded on the North American continent and water from the newly formed Great Lakes carved a path through the Niagara Escarpment en route to the Atlantic Ocean. Since that time, an average of four million cubic feet of water has fallen over the crest line every minute of every day.

“People around the world probably think of Niagara Falls, principally, as a tourist mecca,” says Paul Dyster, the Mayor of the City of Niagara Falls, New York, a metropolis of about 50,000. “But, through much of its history – the city was founded in 1892 – Niagara Falls has actually been an industrial city. And the reason is the presence of this big drop in water levels that creates the potential for energy generation. That was recognized even before the dawn of hydroelectricity, when mechanical mills with water wheels were installed at Niagara Falls to help harness that power.”

In fact, the first known effort to utilize the Falls’ enormous capacity for energy production was in 1759, when Daniel Joncaire built a small canal above the Falls to power his sawmill. In the early 1800’s Augustus and Peter Porter enlarged the original canal to provide hydraulic power for their gristmill and tannery. In 1881, the Niagara River’s first hydroelectric generating station was built, and by the end of the 19th century, Niagara Falls was a heavily industrialized city due, in great part, to the relatively cheap electrical power that the Falls and River generated. Tourism was considered a secondary niche, while industry was the main economic driver – paper, rubber, plastics, petrochemicals, carbon insulators, and abrasives factories were among the city’s major job providers.

At its peak, Niagara Falls had a population of over 100,000. But after the 1960s, the region experienced an economic decline as traditional industries left and people moved on. Despite the decline of heavy industry, though, the city has managed to survive, thanks largely, to the fact that its ‘secondary niche,’ still existed. About 30 million people visit Niagara Falls each year and those tourists predominantly stay in the City of Niagara Falls, New York, and its sister city across the river, Niagara Falls, Ontario.

But, according to Dyster, it’s only been in the 21st century that the City of Niagara Falls, New York has made a concerted effort to promote that secondary niche of tourism into a leading driver of its local economy. “We used to say tourism was like the crocuses in the spring,” he quips. “When the weather changed, all of a sudden the people would come to look at the Falls. It’s not like we were doing anything to encourage them. Now that’s changing, and in our regional economic development plan that we’ve been operating under for the last several years, tourism is identified as one of three key industry clusters in which we should be investing. So, we’ve begun treating tourism systematically as an industry – doing scientific market research, branding, marketing, and thinking about the infrastructure that we need to have here to support the tourism industry.”

One major aspect of that infrastructure that the city has been redeveloping is its transportation networks. “A few years back, we completed construction on a new international airport terminal,” says Dyster. “We’re switching over service from a dilapidated, old freight warehouse that, since 1986, has served as our Amtrak station, to a brand new, $43 million international railway station and intermodal transportation center,” he adds. “But the biggest of all these projects is the removal of the Robert Moses Parkway over a large portion of the city’s waterfront.”

Robert Moses, after whom the Parkway was named, was a celebrated, albeit often controversial, city planner and “master builder” of the mid-20th century. Working mainly in the New York metropolitan area, he was responsible for the construction of many of the Big Apple’s bridges, parks, roadways, and housing projects. “Moses came here in the late 1950s to build a new power plant after the existing Schoellkopf Power Plant collapsed into the river,” Dyster relates. “He was successful in building the new power plant and, at the same time that he did that, he also built the Robert Moses Parkway, which is actually a limited-access expressway built right along the waterfront of the city. So, neighborhoods and business districts since the early 1960s have been cut off from our greatest resource which is our waterfront. And whether you’re talking about the rapids above the falls or the gorge below it, there are not just tremendous recreational opportunities, but tremendous scenic views that are available that have been inaccessible for two generations.”

Moses was a great fan of large roads, and according to Dyster, his was the prevailing style of urban planning for several decades after the Great Depression. “It was a panacea at the time,” Dyster explains. “The dominant paradigm was no one was ever going to put their feet on the ground again; we were just going to zip from place to place in vehicles. So, the way you would access the waterfront was by driving by it and looking at it through a window as opposed to getting on the ground and walking through it. That’s now changed, and we seem to be in a period where reconnecting to the natural environment and encouraging other means of transportation besides automobiles, including pedestrian access and bicycles, seems to be the paradigm now going forward.”

The removal of the Parkway is a two-phase project. “The first phase will be completed this spring,” Dyster says. “That is going to end up costing us about $23 million; that’s the portion upstream from the Falls. The second phase of the project will be completed in the spring of 2019. We’re estimating it at somewhere around $42 or $43 million to remove the existing expressway and replace it with additional parkland with hiking and biking trails and to reconstruct the end street on the city grid, Whirlpool Street, in order to handle the traffic that’s displaced by the removal of the Parkway.”

“So, at the end of the day, you’re going to have a city that is reconnected to its waterfront and that offers the opportunity to be in an urban environment and then twenty minutes later be at the bottom of the Niagara Gorge – a place where civilization seems very, very, far away,” Dyster exclaims. “We think that’s a tremendous opportunity to market those contrasting experiences to people; we think it’s very unique. There are not many places that would combine the ability to be in an urban environment and then to go easily and quickly to so many, very wild places.”

In addition to rebranding Niagara Falls, NY as a tourist destination and making the necessary infrastructure changes, Dyster maintains that, even though tourism will be the lead industry for the future, the city still plans to grow its industrial base – only with a new type of tenant. “What we’re trying to do is be more selective in the types of industries that we encourage to locate here, so that they’re consistent with the image that we want to portray to the world as an icon of the natural environment.”

One newly-founded business is Greenpac, an environmentally-friendly paper mill that opened in 2012 at the city’s $450 million industrial park. “They take corrugated cardboard and recycle it into reusable paper products,” Dyster says. “It uses all recycled materials – no new trees are cut down to feed the mill. It’s a continuous and very sustainable loop.”

Diversifying the city’s economy to include both tourism and green technology is largely the job of Anthony Vilardo, Niagara Falls’ Director of Business and Economic Development. “We want to be cognizant that we don’t fall into the same boat that we did in the latter half of the 20th century, where we were dependent upon one industry,” he says. “So we’re making sure that our economy is diversified by attracting companies like Greenpac to locate here and capitalize on the cheap, renewable power of Niagara Falls. Also, given our proximity to the Canadian border, we’re taking a look at cross-border logistics, importing, and exporting. Those are industries that we’re likely to see emerge here in the next few years, especially with the removal of the Parkway making office space more attractive in the North Main Street sector, which is also where the new intermodal train station is located. So, those are some of the things we’re starting to take a greater look at.”

Finally, when it does come down to tourism, Vilardo also wants to make sure that Niagara Falls, New York, can compete with Niagara Falls, Ontario. “The Canadians got a head start on us in the tourism game, but we’re not deterred by that,” he declares. “The Canadian side is filled with multi-national, corporate chains, which is fine. We want to make sure that when a tour comes to Niagara Falls, New York, they are met with an authentic experience – natural vistas, a natural environment to experience the Falls, and that once you leave the immediate waterfront, places like Old Falls Street and Third Street, and, in the coming years, Main Street, will offer the visitor an authentic experience that you can only get in Niagara Falls, New York. To be able to differentiate ourselves from the Canadian market will be the key to our success, moving forward.”

In addition to being known as a town for honeymooners, for those old enough to remember, there is an old vaudeville routine in which Niagara Falls is prominently featured. To this day, when someone mentions the phrase, “Niagara Falls,” the well-worn comic response is, “Niagara Falls! Slowly I turned … step by step … inch by inch …” And even though the sketch, itself, is nothing more than a piece of show-biz bombast, what may well be true is that, today, the City of Niagara Falls is, indeed, slowly turning – step by step, mile by mile, trail by trail, and business by business, into a new type of metropolis – and one whose residents and visitors will soon be getting a renewed view of an age-old force of power and beauty.

WHO: Niagara Falls, New York
WHAT: A city of 50,000
WHERE: Western New York state, adjacent to the Niagara River
WEBSITE: www.niagarafallsusa.org/

Greenpac Mill – Greenpac Mill is a new, state-of-the-art, linerboard mill in Niagara Falls, NY, recognized for its high tech equipment, sustainable manufacturing processes, and high performance work organization. The company manufactures lightweight linerboard made with 100% recycled fibers and has an annual production capacity of 540,000 short tons. Greenpac Mill is a partnership between Cascades, Caisse de dépôt et placement du Québec, Jamestown Container, and Containerboard Partners. The new mill is the biggest project ever managed by Cascades in its over 50 years of existence. Thanks to numerous technological advances, Greenpac Mill manufactures one of the best linerboards in the industry and is a leader in terms of sustainable development. – www.greenpacmill.com 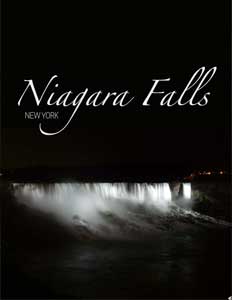