The Washington–Grizzly Stadium – Home of the Griz

Home of the Griz

Business View Magazine interviews Tia Fluri, an Asst. AD at the University of Montana, as part of our focus on collegiate stadiums and sports venues.

The Washington–Grizzly Stadium is an outdoor college football stadium located on the campus of the University of Montana in Missoula, Montana. It is home to the Montana Grizzlies, a member of the Big Sky Conference and a team in the NCAA Division I-FCS (Football Championship Subdivision). The inaugural game at Washington–Grizzly Stadium was played in mid-season in 1986. Between 1968 and 1986, the Griz played off-campus at the “new” Dornblaser Field, and prior to that, from 1920–1967, they played on-campus at the “old” Dornblaser Field (both named for Paul Dornblaser, football captain in 1912 who was killed in World War I).

Plans for a new on-campus football facility at Montana came to fruition in August of 1985, when Missoula businessman, Dennis R. Washington, and the employees of Washington Corporations provided a gift of $1 million, hence the name, Washington-Grizzly Stadium.  The initial cost of the Stadium was around $3.2 million. In the spring of 1995, the facility underwent its first expansion in the north and south end zones. At that time there were 12,500 permanent seats. The cost of that expansion was about $2.5 million. The second expansion occurred in the spring and summer of 2003; approximately 4,000 seats were added to the north end zone section at a cost of around $3.5 million, boosting the stadium capacity to 23,183. 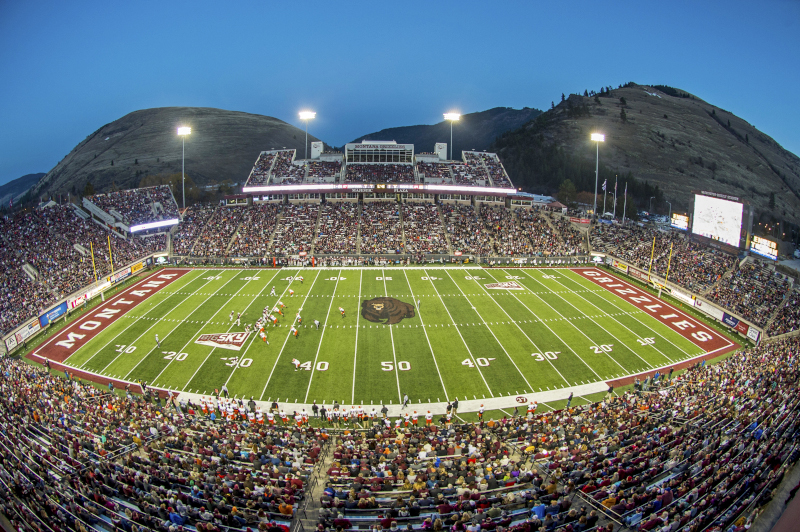 Washington-Grizzly Stadium underwent its third expansion, at a cost of approximately $6.5 million, prior to the 2008 football season. The eastside expansion houses a 500-seat “Stadium Club” with two membership levels: the “Canyon Room,” which has 125 seats inside, and the “Hellgate Terrace,” which has 375 outside seats. The 2008 expansion also provided 375 Grizzly Scholarship Association priority seats, as well as 1,150 non-priority seats, and increased the Stadium’s seating capacity to 25,217, making it the largest venue of its kind in the State of Montana.

A natural-grass playing surface gave way to SprinTurf prior to the 2001 season at a cost of about $1 million, which was paid for by an anonymous donor. A new SprinTurf playing surface was installed in 2008. The playing surface was replaced, again, in the summer of 2016, with multi-color “FieldTurf.” A new “Griz Vision” jumbotron, with ancillary screens to its left and right, was installed in the summer of 2016. It features HD-quality video, and measures 32 feet high by 55 feet wide, approximately twice the size of the old display, which was added in 2002.

On Oct. 14, 2017, the Washington-Grizzly Champions Center opened.  A new generation of Washingtons, Dennis and Phyllis’s sons Kyle and Kevin, on behalf of the Dennis and Phyllis Washington Foundation, gifted $7 million to the University of Montana’s Department of Athletics, to help defray the Center’s $14 million price tag. The Center houses a new student-athlete strength and conditioning facility, football locker room, football lounge, and football meeting rooms. The weight room and locker room sit below grade and make up the first level, while the second level includes a mezzanine for the weight room, the ’95 National Championship team meeting room, five other meeting rooms, and a wider concourse in the football stadium. 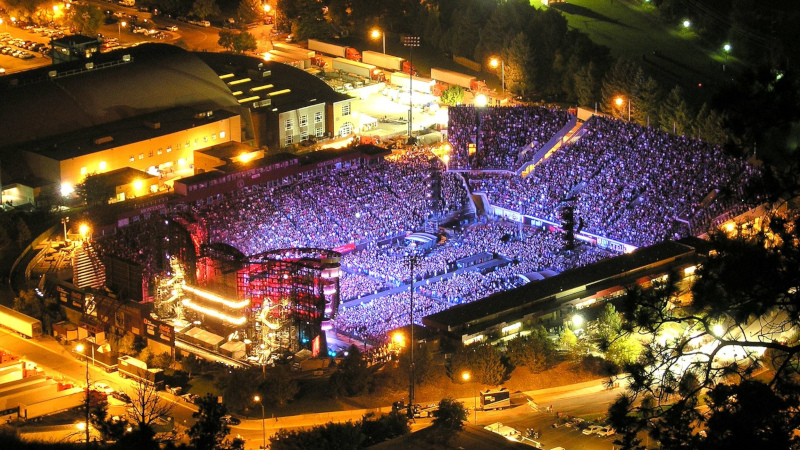 Tia Fluri, Assistant Athletic Director for Internal Operations and Events, reports that, this summer, the Stadium underwent some preventative maintenance. “We try to bite off projects every summer, when we have the down time to be able to keep on top of things,” she says. “The Stadium is 30-plus-years old and is starting to see some wear. We’re in the process of doing some concrete work on our concourses and some repairs to the bleachers to stay ahead of the curve and keep the venue functional and safe for all of the fans when they come.”

For Fluri, the enjoyment of the fans on game day is paramount. “We pride ourself on the fan experience,” she declares. “And we feel that we have one of the best college game day atmospheres in the FCS, and we even rival some of the BCS (Bowl Championship Series) schools, as well. There have been quotes from professional football players that have played in our Stadium during their college days, who have always remembered how loud our stadium was and how engaged the fans were.”

As is the case with all modern stadiums and venues, Washington-Grizzly Stadium has made it a point to upgrade its ability to provide high-quality cell phone service for its patrons. It had a DAS (Distributed Antenna System) installed, which has improved phone connectivity greatly. “And we’ve been looking at the options of putting in public Wi-Fi, as well,” Fluri adds. The Stadium also avails itself of the campus’ sustainability programs and initiatives. “And those services translate to what we do on game day. We try to pair a recycling bin with every trash can, so that option is readily available. Our catering service, which is done in-house, has gone to compostable plastic cups and other sustainable products. All of those little things can add up when you’re talking about large crowds.”

On those days when there is no Grizzly football, the Stadium is put to other uses. “We use the Stadium for a lot of different things, with first preference given to our football team,” Fluri says. “We rent it out for high school football games; we host soccer practices; our university has a club lacrosse team that plays most of their games in the Stadium over the spring and early summer months; and we’ve even held small weddings on the field. For awhile, we were hosting our university’s commencement ceremony in the football stadium, as well. And it’s a community space for those who are interested in renting out a turf facility – especially in the early spring when a lot of the other fields aren’t ready for use, yet. And once we put lights in, in 2012, we’ve been able to go later into the evening. We also hold stadium concerts. They’re few and far between, but when we do them, we do them big. In 2006, we had the Rolling Stones; in 2014, we had Paul McCartney; and in 2018, we had Pearl Jam.”

In conclusion, Fluri reminds everyone that, in addition to great football (not only has Montana won 201 games in its 33 seasons of playing in Washington-Grizzly Stadium, it has gone undefeated 11 times), watching the “Griz” play at home is a great way to experience what it’s like to come to Montana and attend a major sporting event that’s not in a major metropolitan area. “We’re located right at the base of Mount Sentinel, along the bank of the Clark Fork River that runs through our town,” she states. “So it’s a uniquely scenic location for a stadium.”W

WHAT: An outdoor college football stadium

WHERE: The University of Montana in Missoula, Montana

Albertsons and Safeway operate as banners of Albertsons Companies, one of the largest food and drug retailers in the United States. With both a strong local presence and national scale, the company operates stores across 35 states with 20 well-known banners. Albertsons Companies is committed to helping people across the country live better lives by making a meaningful difference neighborhood by neighborhood with quality products and excellent customer service.