Millville, New Jersey, a city of approximately 28,000, is located in Cumberland County, in the southern part of the state, some 45 miles south of Philadelphia. Millville, which incorporated as a township in 1801, derived its name from the numerous mills and factories built along the Maurice River, which, in turn, gave the town shipping access to the Delaware Bay. In 1806, an Irish immigrant, named James Lee, opened the area’s first glass factory, making use of the large amount of silica sand in the region. For most of the next two centuries, Millville was a major U.S. glass producing center.

In fact, American poet, Carl Sandburg, immortalized the glass making prowess of Millville in a 1904 essay: “Down in southern New Jersey, they make glass. By day and by night, the fires burn on in Millville and bid the sand let in the light. Millville by night would have delighted Whistler, who loved gloom and mist and wild shadows. Great rafts of wood and big, brick hulks, dotted with a myriad of lights, glowing and twinkling every shade of red. Big, black flumes shooting out smoke and sparks; bottles, bottles, bottles, of every tint and hue, from a brilliant crimson to the dull green that marks the death of sand and the birth of glass.” 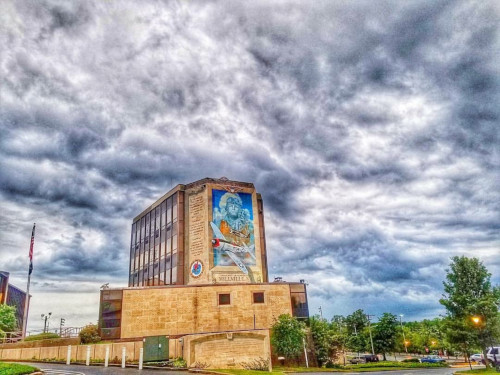 One of Millville’s legendary glass manufacturers was Wheaton Industries. Founded in 1888, by Dr. Theodore Corson Wheaton, it became a mainstay of the economy of southern New Jersey. Run by the Wheaton family for nearly its entire existence, at its height, the company had 41 factories throughout the United States and subsidiaries in 20 other countries. For many decades, it was said that if you lived in Millville, you probably worked at the Wheaton Plant, which, unfortunately closed down in the mid 1990s, with the loss of thousands of jobs, and today, still sits idle.

“The City is working with somebody who is looking to redevelop the Wheaton Plant as another industrial site,” says Samantha Silvers, Millville’s Supervising Planner. “We’re at the preliminary stages of looking at those redevelopment plans; they just submitted them, so I can’t say that there’s really anything on the books, yet. There is an active cleanup on it; it is being remediated. With that type of contamination, the cost to remediate it to something above an industrial standard is very costly. So, I don’t see it turning around and becoming a residential development or something, but to at least address the dilapidated buildings and get the lot cleaned up with new industrial development would be great.”

Millville’s other historic claim to fame is the Millville Army Air Field, dubbed “America’s First Defense Airport.” It opened in 1941, and soon became an important training and refueling site for the U.S. Army Air Forces during World War II. In its three-year existence, over 10,000 soldiers and civilians served there, with about 1,500 pilots receiving advanced fighter training in P-47 Thunderbolts. After the war, the Air Field was returned to the City of Millville.

Today, the renamed Millville Executive Airport is a thriving general aviation facility, owned by the city and managed by the Delaware River & Bay Authority. The Airport is New Jersey’s second largest, strategically located at the center of the Northeast Corridor, one of business aviation’s busiest flying corridors. Recently, Millville has had a portion of the Airport designated as a Foreign Free Trade Zone (FTZ). The United States government operates around 293 FTZs throughout the 50 states. They are secured, designated locations, in or near a U.S. Customs Port of Entry, where foreign and domestic merchandise is generally considered to be in international commerce and, thus, exempt from many regular U.S. Customs rules and regulations. FTZs offer many benefits that importers can take advantage of to improve cash flow, increase global logistics efficiency, reduce redundant or unnecessary logistics costs, and retain flexibility.

“Right now, it’s about 140 acres that are so designated,” explains Silvers, “and we’ve been working with local companies to try to activate that designation, so companies that do a lot of imports, or even exports, can benefit. We can help them be more successful, here.”

Over the last several years, in addition to its aviation and commercial activities, the Airport has also become “a bit of a tourist destination,” according to Silvers. First came the Glasstown Brewing Company, located in the Army Airfield Historic District. “They have a following and they do a lot of different events at their location,” she notes. Upcoming in April is Glasstown Brewing’s Annual Adult Easter Egg Hunt. “And after that, there was a distillery that came there.” That would be the East Coast Distillery, founded in 2014 by Carl L. Coombs III, a producer of a line of flavored moonshines, branded as Jersey Shine. Its tasting room features weekend tours.

Silvers adds that the city has recently approved an application for a “meadery” and “cidery” – mead being an alcoholic beverage created by fermenting honey with water, sometime adding various fruits, spices, grains, or hops; and cider being an alcoholic drink made from fermented crushed fruit, typically apples. “There’s also an antique gun shop out there, and we have the Museum.” 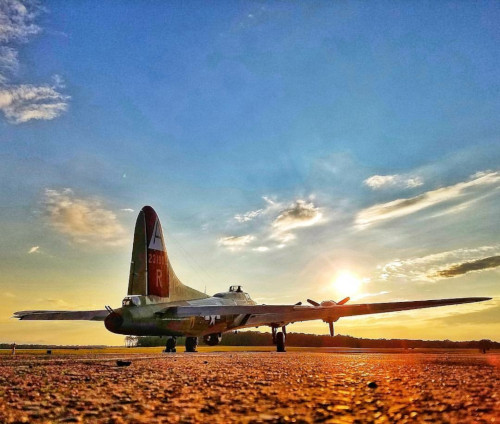 “So, it’s been this little area to spend the day and enjoy things at the Airport,” says Silvers. “There’s also been interest to do another type of military museum, out there. That would be really exciting, because they would be renovating some of the existing historical buildings at the Airport, and that would add to that destination point.”

Outside the Airport perimeter is a 300-acre, city-owned industrial park, the Millville Airport Commerce Center. Silvers says there are a couple of pending contracts between the city and developers. “There’s a food processor, a recycling facility, and we’ve had interest from a cold storage facility,” she reports. “The food processor will be coming for site plan approval in May. That could be, at final buildout, a 487,000-sq.-ft. facility.” The Commerce Center is already home to RLS Logistics’ 56-foot tall, 1.6 million-cubic-foot, refrigerated warehouse, which the Newfield, NJ-based company built there in 2014.

Silvers adds that the City is also focused on the economic development of its downtown, and that several buildings there have recently changed hands. The old Regional Music building on High Street, which has been vacant since 2016, will soon be repurposed as a Taekwondo Center. “It’s a great thing for High Street and will bring people downtown,” she avers. “It’s right near the Arts Gallery and right near restaurants. There’s also a larger redevelopment project expected at the 500 block of High St. that will be underway, this year. They’ve acquired the property for the project; we’ve seen their renderings, so it’s a matter of putting together the financing and I think we’ll start to see some groundbreaking there, shortly.”

Silvers explains that the High Street corridor is located within the city’s 301 census tract, which has been recently designated as one of the country’s 8,700 Federal Opportunity Zones, a new economic development program, created by the 2017 Tax Cuts and Jobs Act, that aims to drive long-term, private investment into low-income communities. A census tract which has been designated as eligible, can receive private investments through Opportunity Funds, which allow their investors to receive certain tax benefits when they reinvest any unrealized capital gains into them for a minimum of five years. “We’re hoping to maybe benefit from investors looking to invest their capital gains in the Opportunity Zone,” says Silvers. “It’s something that we’re promoting even though we may or may not be involved in the projects.”

Another ongoing project in downtown Millville is the repurposing of a local hotel and catering hall – the Country Inn & Suites and the Heritage House/Paper Waiter restaurant – into an assisted living and adult medical day care facility near the Wheaton Arts and Cultural Center. “We think that there’s going to be some good synergy with Wheaton Arts,” says Silvers. Founded as Wheaton Village in 1968, the Wheaton Arts and Cultural Center is a nonprofit organization with a mission to “engage artists and audiences in an evolving exploration of creativity.” At the heart of the Center is the Museum of American Glass, housing the most comprehensive collection of glass produced in the county, and one of only eight museums in New Jersey to be accredited by the American Alliance of Museums.

In addition to bringing more economic development to Millville – both at its industrial park and its downtown core – Silvers says that another focus of the city administration is revitalizing some of its residential neighborhoods “so that they’re places where people want to live. We’re working with the Holley City Development Corporation (HCDC),” she says. “They got an $85,000, Wells Fargo regional foundation neighborhood planning grant, and they’ve been working with the residents of the neighborhood and the downtown businesses to put together a plan that’s neighborhood-based, not top-down driven; seeing what the concerns and goals are of the residents, and then incorporating that into a plan that the city will eventually adopt and incorporate into our plan. Meanwhile, we’re focusing our efforts on Community Development Block Grant (CDBG) funding and different types of funding to help turn around the Center City neighborhood.”

Turning things around in Millville is getting to be a normal routine. A recent successful turnaround was the renovation of the Levoy Theatre, first opened in 1908 as a theatre and dance hall, then a venue for Vaudeville and silent films, and finally a Warner Brothers-owned movie palace. Due to increasing competition from TV and newer suburban movie theaters, as well as its deteriorating physical condition, the Levoy closed its doors in 1974. In the mid 1980s the store space on the ground floor was reopened for leasing, and the second floor mezzanine was torn out to create residential apartments.

A local non-profit group, the Levoy Theatre Preservation Society, struggled for years to raise money in order to purchase and redevelop the theatre, and finally, in 2010, a multi-million dollar financial package containing a combination of tax credits, private, and public funds was compiled, and work on the restoration of the theatre began shortly thereafter. The Levoy Theatre successfully re-opened in September, 2012. Much of the building’s new interior was modeled and matched to the historic features of the century-old venue; it features a small entrance lobby, followed by a larger ground-floor lobby, and a grand staircase leading to a mezzanine lobby. The new theatre seats about 700 patrons, has state-of-art sound and lighting, and a levitating orchestra pit. Today, the Levoy Theater is doing well. “Shows are selling out there,” says Silvers.

With new businesses popping up, old structures being brought back to life, a vibrant downtown arts scene, exemplified by the Glasstown Center Arts District, an inviting downtown area for visitors to stroll, relax, dine, and shop for art and fine crafts, and residential neighborhoods being re-imagined, Millville, New Jersey is a city that is confidently embracing its future.

WHERE: Cumberland County, in the southern part of the state.