Charleston, West Virginia, located at the confluence of the Elk and Kanawha Rivers in Kanawha County, in the southwestern part of the state, is the state capital and its largest city. It was initially settled in the late 18th century, and was officially established as town in 1794 with 35 residents. In 1817, coal was first discovered in the region, and for many years, coal was a mainstay of the region’s economy, along with a vibrant chemical industry that came along in the 20th century. Today, with a population of approximately 50,000, Charleston is attempting to rebuild its economic base, now that those two major economic drivers have all but disappeared from the scene.

One of the organizations charged with aiding in the redevelopment of the city’s economic drivers is the Charleston Urban Renewal Authority (CURA). Working with residents, businesses, other local non-profit groups, and city leaders, CURA provides financial and administrative assistance to support redevelopment activities throughout the city, specifically in the realm of property renewal. “We take on properties and areas that the private sector is unable to deal with because of physical and market conditions,” says Jim Edwards, the recently retired Executive Director of CURA. “We have purchased buildings that have sat vacant for, in some cases, decades. We eliminate some of the risk and some of the challenges that drive away private investors. And then, we seek proposals from investors and developers to renovate and put these buildings back into service.

“Recently, in spite of the economic conditions we’re operating under, we’ve been successful at acquiring, improving, and getting properties back into private hands and redeveloped,” he continues. “Our goal is to get them back into private hands as soon as possible; we’re not interested in holding property because it’s not generating economic activity then and not paying taxes. Historically, the agency was more of a traditional urban renewal agency that would locate a neighborhood or a building, or a group of buildings that were in poor condition and acquire and demolish them, and turn them into surface parking and not be aggressive about getting them back into private hands and developed. And we’ve been working to change that. So, we do have an inventory of properties, and we’re working, one by one, to get those in private hands and developed.”

CURA was created by the City of Charleston in 1952 and is led by a Board of Directors appointed by the mayor. Although not an official part of the city administration, as it is does not operate with public funds, CURA does function as a quasi-public agency and the monies it does receive become public monies. “Forty years ago, the agency assembled a very large tract of downtown – multiple parcels of property that was redeveloped,” Edwards recounts. “A private developer built a large, regional shopping center – an enclosed, two-level mall with four anchors and a hotel. Instead of selling the developer that property, the Board, back then, decided to lease it. So, we get rent from the mall and from the hotel on the land underlying the project. It’s kind of an ideal model in that a successful redevelopment project from the past is funding the redevelopment of other areas of the community in need.”

Edwards explains some of the challenges facing CURA, as well as the City of Charleston, due to the current economic conditions in the region: “Charleston, and all of West Virginia, is in the process of trying to diversify its economy in light of the fact that energy, coal specifically, has been declining in terms of being a contributor to the economy,” he begins. “Charleston, specifically, and West Virginia in general, has actually been losing population for, at least, the last fifty years. So, obviously, that means fewer jobs and less viability. The chemical industry used to be headquartered in this region, processing materials to make a number of finished chemicals, and those businesses moved away from here a couple of decades ago. There is still some of the chemical industry here – Dow, DuPont, Bayer – but those have down-sized dramatically from where they were 30, 40, 50 years ago. So, this latest emphasis on the loss of coal is just the latest chapter in the decline of the energy/chemical industry in this area.”

Edwards adds that, despite the hope of some that coal mining will re-emerge as a potent addition to the area’s economy, it’s unlikely that that will occur. And neither his agency, nor the city of Charleston, nor the private sector is banking on it. “No matter what any elected or private individual want to do, it’s going to be determined, not only by the cost of getting coal out of the ground, but the cost of competing sources of energy, such as natural gas. And because of horizontal drilling and the ability to open up shale deposits of gas, the production of gas has gone up dramatically, which has lowered its cost to where it’s cheaper than coal,” he states. “So, the North American and worldwide market for coal is going to determine whether or not it comes back.”

Naturally, the loss of the coal industry has had a profound impact on the area’s population. “And it’s particularly true in the areas where it’s produced the most and that is the southern counties of West Virginia, which have been losing population for years, and now it’s really dropping off dramatically,” Edwards says, ruefully. “There are, literally, historic towns in southern West Virginia that are turning into ghost towns. And as you might expect, the loss of population has created a somewhat stagnant real estate economy, which is the area that affects our work the most,” he continues. “Just recently, we’ve had an uptick in the vacancy rate of downtown buildings in general, and Class A buildings, specifically, with engineering and energy-related firms either leaving entirely, or down-sizing their presence. So, in terms of redeveloping the community, we not only have the normal challenges that every community faces – blight, older properties, low income neighborhoods, aging infrastructure – we also have a very weak economy. So, we have a real challenge in making things happen when the economy is not growing.”

That being said, Edwards points to a number of current and ongoing initiatives in a city that is determined to meet its challenges, head on. “Probably the greatest one from an economic development standpoint is one that’s being driven by the city itself and not by our agency,” he says. “And that is the complete reconstruction and expansion of the Civic Center. The city built the Civic Center in the late 1950s and over the years has expanded it. It has an arena for sports and concerts; it has meeting space and ballroom space, and a small theater. So, it’s a multi-use facility. But, it’s gotten tired and it’s not competitive with other facilities in the greater region. So, the city is spending in the range of 80 to 90 million dollars to expand and improve the facility to make it much more competitive for major meetings and events, drawing those dollars from far outside the area. So, that’s the largest effort, and probably one of the quickest ways to generate new dollars into the community, because it only takes a couple of years to get the facility improved and attracting new investment, as opposed to job creating, which takes much longer.

“There are two other projects that the city is pursuing that we are in support of,” Edwards continues. “A river runs through the center of Charleston – the Kanawha River – and a rather nice boulevard runs along that river from the west side, through downtown, to the east end of the community. So, the city is working on a project that will create a really high-quality pedestrian/ bicycle amenity along the river, which is not only for current residents, but will make the community more attractive to new people coming from outside. In addition, there is a pedestrian improvement, currently under construction, right in the heart of downtown, which leads from the traditional retail shopping street – Capitol St. – to the mall, and then on to connect with the Civic Center. And CURA is contributing $600,000 to that effort because we see the benefit that it will have for attracting tenants and investment to the downtown. And, coincidentally, this pedestrian spine goes right past a building that CURA purchased to get it out of the hands of a previous owner and into the hands of a motivated developer.”

While the City of Charleston does not have its own Economic Development Department, Edwards says that CURA works closely with its Planning Department, as well as with two other local organizations that are also working to help rebuild Charleston’s economy. One is The Charleston Area Alliance, which is a private, non-profit, that basically functions as a Chamber of Commerce. “It has a recruitment arm, just like most chambers do, and, of course, it has the normal events and services for its members. And it has a community development component that focuses on downtown and nearby neighborhoods,” Edwards says. “The other organization is the Convention and Visitors Bureau of Charleston. They are the ones who promote the area beyond the county and state.”

Together, CURA, and these other organizations, are providing the vision and leadership that continue to encourage the revitalization, restoration, and rebuilding of the City of Charleston, West Virginia.

WHO: The Charleston Urban Renewal Authority

WHAT: A non-profit, quasi-public, redevelopment organization

VIEW THE DIGITAL VERSON OF THIS FEATURE 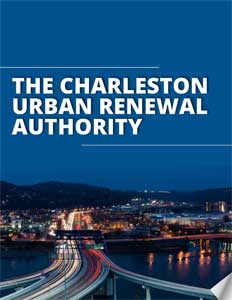