365 Retail Markets LLC, is the global leader in self-checkout and automated workplace technology for the food service, hospitality, and vending industries. The company, manufactures, implement, and supports point-of-sale solutions for the workplace.It was founded by its current CEO, Joe Hessling, who began his career in the dining business, providing food and food services to large corporations in the greater Detroit area. 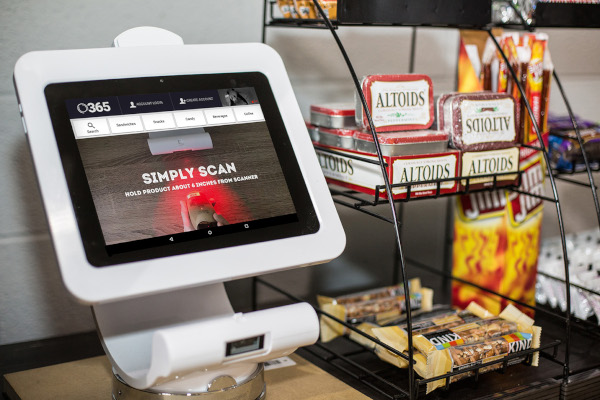 According to Hessling, the catalyst that helped launch 365 Retail Markets was the Great Recession of 2008, when his clients began requesting superior service for less money. “The idea was to be able to provide service and snacks and sell products when people, such as a cashier, weren’t there,” he explains. “We started to contact companies, introducing the idea of the MicroMarket, which is basically a small, unattended store where delivery drivers drop off products and pick up the cash from the actual machines. It seemed to fit in nicely with vending machine companies, because it was very similar to what they already did. As we started to dive deeper into MicroMarkets, vending operators became our initial customers and we eventually started to sell to all vending route operators. So, our typical customers are companies that operate in the business and industry space of providing services. Then there are vending and routing companies that go out and place these MicroMarkets in businesses, and then service and restock the food and beverages that are sold on a weekly or daily basis.”

Today, the company has 180 employees, with locations in Santa Clara, California, Provo, Utah, and its world headquarters outside of Detroit, Michigan. “We also have a satellite office in London, UK, where we support our European operations,” Hessling adds. “Our largest market is, of course, the United States, followed by Canada, and then the UK. We also operate in Australia, Switzerland, the Netherlands, Germany, Spain, and France. And we expect to be in about 20 countries by the end of 2019.” 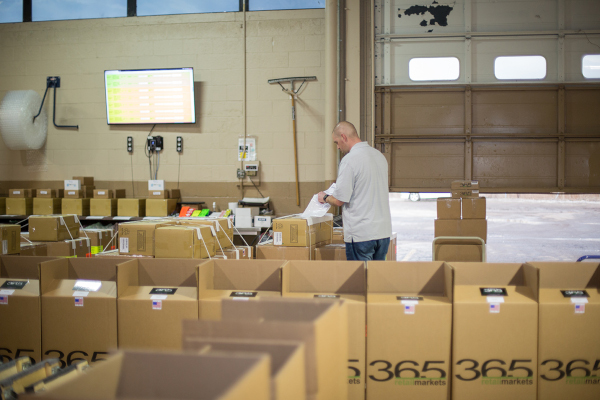 When Hessling began 365 Retail Markets, the company had no competitors, but as the MicroMarket model began to be successful, others entered the fray. “We are the largest in the space with over 50 percent of the marketplace and the rest is divided up by another six players in the field,” Hessling confirms. “The traditional kiosk, which is the heart of what we do, is where we compete. What makes us different is that we have multiple products that are aimed at multiple places within the space. If you look at a lot of our competitors, they are primarily focused on one kiosk in the MicroMarket, while our business is aimed at the unattended space and providing more value in that space. So, whether it’s a screen that attaches to a vending machine so that people can make purchases easier, that’s a product that we have; a mobile only option, that’s a product that we have; a small tablet option, that’s a product that we have. In addition, we own a dining technology company, which allows us to have point of sales for dining and cafeteria management.

“And all of that has a full cloud analytics back end, which can do reporting and payment reconciliation, inventory and SKU, and price management, as well. We have a call center with staff of 40 people that support all of these products, 24/7/365. So, there are many reasons why people choose us, but the biggest is that we are the most responsive and, whether you choose to use one or all of our products, we’ll partner with you and work to create something that works for your company, rather than others that say, ‘It’s our way or the highway.’”

Hessling relates that it took time for the MicroMarket concept to catch on. There was a learning curve for some of the less technologically-savvy people in the business environments where the technology was being introduced. “At first glance, it probably was intimidating,” he admits. “But people got used to the fact that this was a new way of buying things, and a lot of these stores were actually just replacing banks of vending machines. And as they started to use it more, and as they got used to it, and used it on a daily basis, they didn’t want to turn back. The participation level probably doubled, if not tripled, with this new type of technology. And that’s what made us successful; the marketplace had grown from one, when we first opened the first one, to over 30,000 in the workplace.”

Hessling adds that 365 Retail Markets is constantly innovating and coming up with new products and services. “In the next few months, we will release a new, smaller terminal,” he states. “It’s even smaller than a tablet, so that’s something that we expect to be out in the market with more points of purchase within building locations, rather than one central one. You can also look for some very interesting technologies similar to Amazon Go (a chain of convenience stores that are partially-automated, with customers able to purchase products without being checked out by a cashier or using a self-checkout station), with computer vision, artificial intelligence, facial recognition, and things of that nature. We have also partnered with a company called Advana, which is going to bring product promotions and product advertisements within these stores, to be able to help consumers make decisions on the products that they choose and buy. We have over 2,000,000 daily users of our system, so we should be leveraging that to help brands get their message across.”

Hessling believes that within the next several years, the world will move more and more toward a self-service economy. “Cashiers are disappearing and people are doing more things on mobile, on tablets, on touch screens, and things of that nature,” he avers. “We just happen to be in the right place at the right time with a great product. Large organizations require enterprise level partners; they also require service, new software, and different custom needs. So, our organization continues to grow. This year, we’ll grow another 20 people; in 2020, we’ll grow another 40 people, and so on. The organization will grow to fit the needs of our customers as they grow.” 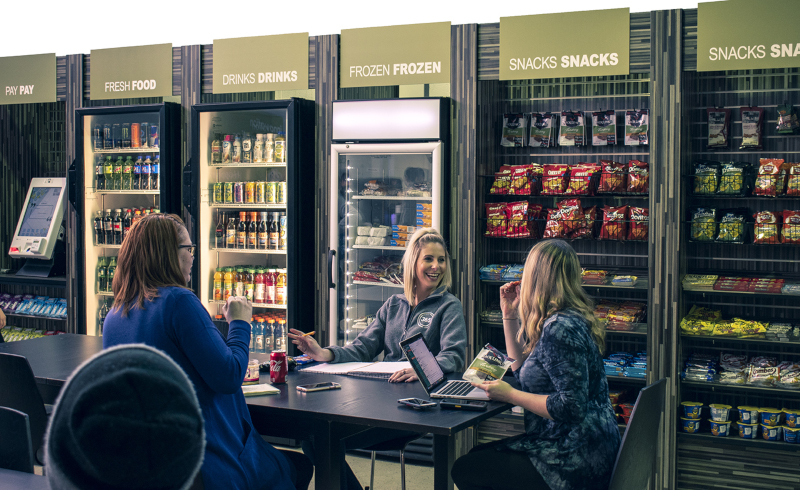 One of Hessling’s satisfied customers is Buffalo Rock, a family-owned business based in Birmingham, Alabama that has a full-line vending division, and now has over 140 MicroMarkets in its portfolio. The division is run by Dick Hanson, who sings 365 Retail Market’s praises: “Once you put a MicroMarket in an account, it is such a huge benefit to the employees,” he says. “They love the fact that what you can bring to the MicroMarket, in a product sense, is so different than what you can do in a vending machine. And we’ve seen that over time. Once you go from traditional vending, which averaged 60-65 products in our case, we now offer about 200 products in the MicroMarket. It’s been a great partnership.”

“The most important thing to know,” says Hessling in conclusion, “is that if you work in an office and you see these machines, that we’re the company that manufactures and supports them and keeps them going every day. And if you don’t have a MicroMarket within your place of business. . . you should.”

WHAT:  A provider of point-of-sale solutions for the workplace

A US based company with over 200 thousand orders shipped since 2008, and just a 2% return rate, REVO America has quickly established itself as the upper echelon of video surveillance equipment. With over 30 years of combined experience in video surveillance product manufacturing, management and support, REVO offers the highest quality in video surveillance equipment. REVO has a wide range portfolio of leading technologies – IP, Analog HD & wireless products. The products support free remote viewing. REVO offer free lifetime technical support. All products are stored and warehoused locally at our Headquarters in Coppell, Texas.

Whatever your surveillance needs may be, REVO has a solution for you.

At the core of Epson’s POS business is its network of world-class partners such as 365 Retail Markets. Partnerships with the right printer supplier are instrumental in providing better solutions to customers quickly. Epson is a great strategic partner and a trusted brand that offers the right level of support and business practices to help improve its partners’ product portfolios and generate new business growth.

Receipt printers play a mission-critical role for most merchants and downtime can adversely affect their operations. Robust support is important and Epson has the resources available to effectively service the partner and the end customer. And with exceptional product durability, Epson partners and customers can enjoy worry-free receipt printing solutions.

In addition, Epson is committed to innovation with a roadmap that includes the latest technology features that are critical for today’s quickly changing markets. A leader in mobile printing technology, Epson’s innovative mobile-centric solutions are designed to energize the in-store experience and streamline store operations. Support for iBeacon and NFC connectivity enable transactions virtually anywhere in the store and Epson’s OmniLink cloud-based printers enable merchants to capture valuable data streams and turn them into actionable information for a variety of services, including loyalty programs, customized surveys, coupons and bundled sales offerings.

Epson is a trusted brand that provides top-notch partner support and industry-leading smart technologies and products to help merchants successfully meet the challenges and gain the advantages that are presented in the rapidly changing retail and hospitality environments. 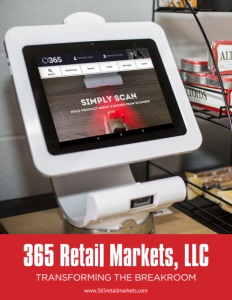