December 2014Past IssuesSupply Chain and Logistics

The enterprise now known as the DACO Corporation was established in 1972 when its founder, Dick Anderson, got started on a vision to serve the material handling needs of the fishing and agricultural markets in the Pacific Northwest region out of his home in Bellevue, Wash. His son, John, joined the company later that year as a 50 percent owner. The operation, then known as the Dick Anderson Company, expanded over the years to include food processing clients and grew its territorial reach to serve customers across Washington, Oregon and Alaska.

The company’s sales and warehousing functions were combined when it christened its first building in nearby Bellevue, Wash. in 1979, and continuing momentum eventually warranted moves to a larger building in Bellevue in 1988, followed by another in Kent location seven years later.
Upon retiring in 1999, Dick Anderson sold his share of the business to long-time employee Kevin Katona, who arrived to the ownership role with an enhanced aim to not only improve service to the existing fishing, agricultural and food processing customer base, but to branch out to create relationships within other manufacturing and distribution industries.

John Anderson retired in 2000 and sold his remaining portion of the company to Steve Duffield, prompting a corporate name switch to the DACO Corporation and a renewed focus on what the operation now refers to as “Knock Your Socks off Customer Service.” 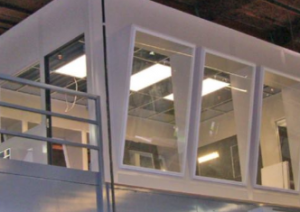 “Kevin and I have grown DACO through a plan, more so than through circumstance,” said Duffield, who’s now listed as both co-owner and vice president of sales. “When we took ownership we sat down together and created our vision, mission and values.  Our vision is to become our customers’ first thought and best choice. Our mission is to increase our customers’ productivity. And we have nine values that we use to help guide the company in how we conduct business.

“We look at all of this periodically to make sure that it is still relevant and we might tweak it if necessary, but at the core it has remained the same.”

Katona and Duffield implemented a three-tier commission plan for the company sales team to drive it toward an assemblage of manufacturers the two men believed would propel overall growth. The highest commission is paid on a select group of 10 Tier 1 suppliers provide DACO with a measure of exclusivity with their products. Seventeen Tier 2 suppliers generate a commission two-thirds the level of the top tier, while Tier 3 comprises the remaining manufacturers and has a one-third commission.  “This structure has allowed us to focus our sales team toward selling the products that matter to us as a company,” Duffield said. “Our employees are incentivized through our performance-based bonuses. Everyone in the company has the ability to make a difference and grow the company toward our vision. The bonuses are meaningful – up to 25 percent of base pay – and are geared toward directing efforts toward the things that we need to do in order to reach our goals.”

DACO’s workforce, which was 20 employees at the time of the ownership transition, now stands at 40 through a combination of organic growth and the acquisition of Applied Handling Northwest – now being run as a division of DACO – in November 2013. The corporate office and warehouse operations are housed in a 93,000-square-foot facility in Kent that opened last year, and the assets also include a 4,000-square-foot office/warehouse building in Portland, Ore.

Nearly 80 percent of overall business is transacted with customers within the original territorial blueprint of Washington, Oregon and Alaska, though 20 percent these days is done across the rest of the U.S. The largest share of the business – roughly 35 percent, Duffield said – comes from food processors and growers, and frequently brings with it a unique sense of late-stage urgency.
“In this sector they often don’t know what they are going to need until the last minute,” Duffield said. “They won’t know if it is going to be a strong fish run until during the season or they won’t know if the cherries are going to be a strong crop until near harvest, and even then Mother Nature can play a role in increasing or decreasing the harvest. For that reason, we inventory a lot of fish totes, harvesting lugs and other plastic containers, pallets and cleaning tools that they need. The processors can’t wait for the manufacturer to produce these products so we carry a large inventory of it for them.” Other strong business sectors for DACO include fishing (17 percent), manufacturing (30 percent) and distribution (20 percent). Duffield said 20 or so material handling companies compete with DACO on a limited basis in the region in specific niche market segments, while two or three other entities are more routine competitors when it comes to larger products that have been put out to bid.

In those situations, he said, the company relies on its relationship approach.

“We strive to be easy to do business 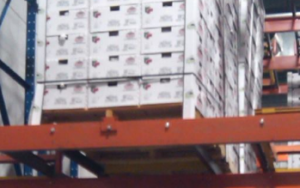 with,” Duffield said. “We are continuously looking at our operations to see what we can do to make it easy for our customers to do business with us. We also measure our customer service and reward our team on hitting an 8.75 out of 10 average rating. We compete in an environment where the little things are the differentiators, and we work to make sure that we are good at the little things while still consciously aiming toward bigger things.”

The move to the new headquarters in 2013 allowed DACO to increase its inventory and fabrication abilities, and establish a warehouse with products that can be used for demonstrations to customers. DACO is now the West Coast training center for Blue Giant – a provider of loading dock and material handling equipment – and the warehouse also includes UNARCO racking equipment, a Borroughs mobile aisle shelving system and a sample area for products that DACO sells and inventories.

Another offshoot company, Authority Dock and Door, was founded in Portland, Ore. earlier this year and focuses on installation and service of doors and dock equipment. Expanding that new venture, Duffield said, is just one of several items on the agenda for him and Katona.

“We have a goal of growing to $100 million in sales over the next seven years,” he said. “This will be a combination of strengthening our presence on the Internet, acquiring companies that are either in geographically strategic locations or are providing expertise in an area that we need to strengthen the company, as well as looking at ways to make the buying experience easy and memorable so that our customers continue to come back.” 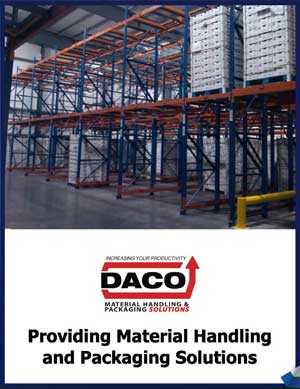