Best on the bay

“We feel like a small town in a lot of ways,” says Union City, California Digital Marketing Manager, Finney Burch. “People know each other, but we’re also a very innovative, growing place. I think we’re one of the best towns in the East Bay.” It would seem that in many ways, Union City, California, situated within 30 miles of San Francisco, San Jose, and Silicon Valley, does have it all – a great place to live, work, and play, right in the middle of one of the country’s most vibrant and exciting areas, known as much for its topographical beauty, as it is for the pioneering and future-oriented mind-set of its people.

The city of approximately 74,000 was incorporated in 1959 by combining the communities of Alvarado, New Haven, and Decoto. “We’re grateful for our location,” Burch continues. “We are sort of a gateway to Silicon Valley; we’re close to lots of business opportunities for those who want to expand and grow. And we’re a place that entrepreneurs can thrive.” Indeed, over the past decades, Union City has grown an innovative and ethnically diverse culture with a population of thinkers and doers from many parts of the world. “Forty percent of our residents were born outside the United States,” Burch adds. “That presents a lot of opportunities for diversity. . .and amazing food!”

Food aside, Union City, California is a Mecca for potential job creators looking to establish roots; a place where they can operate a viable business and still easily connect with the rest of the region. And the city is more than happy to assist. “We do a great job helping them work through the permitting process,” Burch says. “All of the people who work here really try to help new businesses that are trying to get started. We don’t have a lot of red tape.” The good news is that Union City already has a strong economic base with a wide variety of large businesses from medical device and food product manufacturers, to major health care providers, to industrial and shipping companies.

But Union City, California is also a wonderful place to live. Its approximately 18 square miles provides a variety of housing – ranging from affordable to upscale – across a number of charming city neighborhoods, all with access to parks, sports fields, and other community facilities. “We have a park within a ten-minute walking distance of every residence,” boasts Burch.

In 2008, in order to make Union City, California even more amenable both to its businesses and residents, it proposed an extensive redevelopment of the city’s BART (Bay Area Rapid Transit) station – which had been serving the community since 1972 – and the lands around it. The Union City Station District project included the purchase and remediation of a former, 30-acre PG&E pipe yard, a reconfiguration of the station to make it more accessible to pedestrians and buses, and the construction of nearby housing units.

Joan Malloy is Union City’s Economic and Community Development Director and oversees the many parts of the Station redevelopment project. One facet, which Malloy says will be complete by the end of 2016, is the creation of a two-sided BART station. “Union City had a single-sided station and we are now finishing up making it a two-sided station with a brand new direct pedestrian access for the residential units that are either built or planned,” she says. “We’ve completed the East Plaza which is the forecourt to that new entrance. So, we’ve been steadily chipping away at very important public infrastructure around the BART station to create a transit-oriented development.”

Malloy reports that over the last decade, 800 units of housing have been built within a quarter mile of the BART depot on both its east and west sides. “We have 243 apartment units going in right now that are within that one quarter mile radius of the station,” she says, “and another 300 or so are coming online in the next few years. So, we’ve been building residential consistently around our BART station over the last ten years and will continue to do so, probably, for the next five.”

Malloy says that the apartments currently going up are doing so at a very rapid pace because of the modular construction technology employed by the builders. She explains: “Modular design works very well for residential because you usually have repeating floor plans as you march up the building. You stack all of your kitchens and your bathrooms generally on top of each other so that you have these utility cores; that’s how multi-family typically works. And so, because of the repetition in multi-family development, modular construction works really, really well. It saves time and money because much of the units are fabricated as modular pieces, offsite, and delivered to the site fully-finished. You essentially stack them in place, finish out your utility corridors, finish out your circulation corridors, provide a skin on the building to create a unifying architectural vision, and you have the building. We started the modular construction about eight weeks ago and they have installed well over 100 units in the last eight weeks. So, you can see how this speeds up the construction process, immensely.”

Union City, California is applying those monies to develop a number of rain gardens at various sites in the city’s Decoto district. City workers have been building rain gardens in bulb-outs filled with bay-friendly plants that remove pollutants from storm water runoff. The gardens have depressions that allow the water to sit and percolate through the soil. “We take the storm drain water, run it into a planter area with special material that takes the pollutants out,” Ruark says. “Then the water bubbles up and goes into the storm drain system below.”

In addition, asphalt along the curbs is being torn out and replaced with pervious pavers that allow runoff to seep through into underground gravel beds. “The water runs into the pervious pavers and soaks into the ground,” Ruark adds. “A filtration system removes the pollutants and then it is piped to the rain gardens and not into the storm drain system.” Ultimately all the refreshed water empties into Dry Creek, which feeds into Alameda Creek and eventually into San Francisco Bay.

“One grant was for $720,000, which we placed to our Decoto Green Street project,” says Ruark. “That was a three-block length project and it was just completed last October and was well-received by the community. The second project that we’re doing is much larger. It’s a $3 million grant with a $1 million match. That is from F Street to I Street and from 12th to 15th; it encompasses 15 intersections which equates to 34 rain gardens that we’re installing, as well as pervious pavers. It is under construction and should be completed in about a month. The third project is an extenuation of H Street, where we’re taking it all the way to Decoto. That is a 12-block project and it will consist of 35 rain gardens. And that’s $3.75 million.”

Ruark adds that the city’s rain garden projects have received both praise and imitation. “The Regional Water Quality Control Board who gave us two of these grants have come out and are really pleased with the work that we’re doing. And we’re probably one of the leading cities in this area that’s doing this much work in this field. In addition to that, we’ve implemented these procedures into our new sub-divisions. We had a sub-division that went into a former school site – 45 lots on a seven-acre parcel. And they’ve incorporated the rain gardens and it’s been very successful.”

Another ongoing project is the transformation of the Union City Community Center into a Teen Center. “The first phase of that will provide a small café and some modifications to the side of the building,” Ruark says. “It will include seven works of art that are currently being designed. The teens will have a heavy input into it, working with a local artist. There will be four murals – two exterior and two interior – and some text-based art in the entry and in the lounge. It’s approximately a $4 million expansion under Phase One.” Additional funding is being sought to double the size of the building and incorporate such sustainability features as a “green roof.”

“Fortunately, the city has a public arts fund and has set aside $250,000 for the illuminaries to bring this art to the Teen Center,” says Ruark. “And there is a fund that came from Measure WW.” (Measure WW was approved by voters in Alameda and Contra Costa counties in November 2008. It made funding available directly to cities and special park districts for high priority community park projects.) “And this qualified for that,” he continues. “So there’s a $2 million grant that is providing some of the funds, and then the City Council authorized another million dollars from some other sources.”

As all of these major projects reach completion, they will merely add to the already high-quality of life enjoyed by the residents of Union City. And with its strong economy, diverse population, excellent schools, and world-renowned location, it’s the ideal place to do business, to work, and to live. Or as Finney Burch says, correcting her previous comment: “I mean it’s the best town in the East Bay.”

Check out this handpicked feature on Savannah Georgia – After the flood.

WHERE: In Alameda County in the San Francisco Bay area 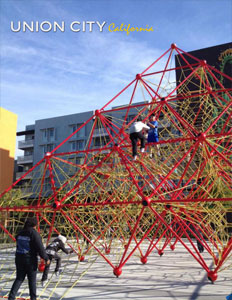